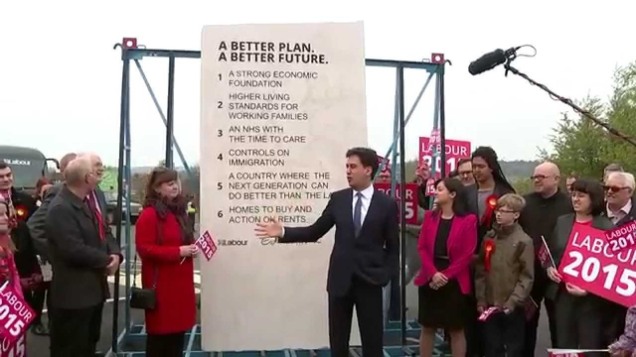 When Ed Miliband stood in a field last month and unveiled his universally mocked policy monolith – swiftly renamed the EdStone by political journalists who couldn’t quite believe their luck – the brains behind the doomed operation was a young whippersnapper named Torsten Henricson-Bell, a 32-year old special advisor and Oxford grad described by one MP as being “totally devoid of any politics”.

A few days later, when the #EdStone fiasco forced the Labour Party into full damage control mode, it was 40-year old campaign manager and Miliband acolyte Lucy Powell – another politico without a day’s real-world work experience to her name – who managed to make things even worse by suggesting that Ed Miliband shouldn’t actually be expected to keep the vague pledges he had taken the effort of carving into tablet form.

The rise of these people is hardly limited to the Labour Party. A former policy unit apparatchik and ministerial bag carrier from the John Major administration now sits in Number 10 Downing Street, re-elected to serve a second term as Prime Minister having transformed the Conservative Party into an ideologically rootless but effective vote-winning machine. The difference between David Cameron and Torsten Henricson-Bell is only one of competence, not of kind.

Nearly a month after the ideologically barren, soul-sappingly irrelevant general election – and Labour’s abject defeat at the hands of David Cameron’s Coke Zero Conservatives – it is time to face facts: the Bright Young Things of British politics, the embryonic career politicians shimmying up the greasy pole in search of a safe Westminster seat courtesy of their party machines, are the symptom, not the cure, of Britain’s political ills.

This is not to say that there is anything inherently virtuous about old-time politicians keeping the green benches of the House of Commons warm because they have nothing better to do as retirement looms. Old veterans and big beasts can be just as gormless as the newest Young Conservative or Labour hot-shot. But there is a wisdom, depth of knowledge and common sense which comes from having been around the block a few times, and even (heaven forfend) having lived outside the world of politics, which is increasingly undervalued – and under threat – in the highest levels of government and opposition.

It is not only the Cabinet and Shadow Cabinet where big beasts, wise old hands and people with real life experience have become an endangered species, for the problem first manifests itself behind the scenes with the ranks of Special Advisers and those biding their time in think tanks or policy groups.

Lucy Powell, Torsten Henricson-Bell, failed Labour leadership candidate Chuka Umunna – take your pick. It’s hard to imagine any of their numerous sins of hopeless naïveté and godawful party management being committed by experienced operators with twenty or thirty years of experience under their belts. This general election the was worst and most shocking defeat for Labour since 1983. And since Ed Miliband’s leadership was an explicit rejection of Tony Blair’s successful formula, Labour’s only contemporary success story, perhaps Miliband’s search for a new direction might have been aided if a few more of the people advising him had come of political age before the Blair era began.

None of this is to argue there is no place for youth in politics. On the contrary, we need to hear the voices of the young better articulated in Westminster – after all, even the current hegemony of under-50s in politics has not stopped the overwhelming bias of government policy toward the elderly and against the young (non-means tested benefits for pensioners, no new houses built for the young to buy, etc.) So on balance it is good that a twenty-year old like the SNP’s Mhairi Black can sit in parliament representing her constituency in Westminster, because Lord knows that Britain’s ancient institutions and politics need to hear and better reflect the voices of this generation.

But it becomes a problem when almost everyone at the top of British politics still has their original hair colour (or a plausibly dyed alternative), and when they have no political memory pre-Thatcher. It’s a problem when they have no intuitive understanding of the hard choice made by Britain in 1979 (slow terminal decline or painful pro-market reform), and the competing ideologies behind that existential decision.

It’s a problem when politicians who came of age at the end of the Cold War don’t appreciate the importance of maintaining a strong national defence, and think they can simply raid the defence budget to pay for the social policy du jour. And it’s a problem when the leading politicians of both main parties cannot recall a time when Britain was an independent country, not just a star on the EU’s flag.

With the hegemony of the young comes the arrogance of a generation who think they have all the answers. But it has never been more apparent that we do not. Britain often likes to think of itself as a more enlightened and progressive place than America, but can you even begin to imagine a scenario where a 67-year old woman (Hillary Clinton ) and a 62-year old man (Jeb Bush) might plausibly battle it out to lead the country? It would simply never happen in modern Britain, because ageism is alive and well in the top tier of British politics.

British politics will never win back the respect and attention of a cynical electorate so long as the Lucy Powells and Torsten Henricson-Bells of this country, the SpAdocracy, continue to thrive and multiply in Westminster, unopposed. With no effort at counterbalancing their toxic presence through the intake of people from more diverse backgrounds – the citizen politician, the late-in-life politician, the politician from a disadvantaged background, the successful businessperson turned politician, the struggling small business owner and others who do not fit the typical mould – MPs will remain vulnerable to the charge that they are “all the same”. Because, increasingly, they are.

Young. Brash. Cheerfully ignorant of history and blissfully devoid of ideology, these young guns pick a career in politics the same way that others swarm to high tech firms, the media or academia – because it looks fun, the lifestyle is appealing, and because all their friends are doing it. They pick a political party not so much because it fits with their own core beliefs (they usually have none) but as the result of a cold calculation that playing for either Team Red or Team Blue will best advance their future careers. For awhile, they were nothing more than an annoyance in the background of politics, something to keep an eye on for the future. But now these know-nothing, soulless parasites have driven politics into irrelevance, and the Labour Party off an electoral cliff.

These awful personalities congeal in the chambers and committees of the Oxford and Cambridge Union societies, “making a name” for themselves on the debating circuit or by penning earnest but unoriginal articles for student publications in support of whichever team (Red or Blue) they choose to serve as hired guns. Overwhelmingly privileged and well-connected, after graduation they quickly “break through” to attract the attention of the national media before leveraging their impeccable connections to land a junior advisory position for a parliamentarian or think tank.

Fast-forward a few short years, and if these embryonic career politicians have kept their heads down, flattered the right people and avoided dropping the ball too conspicuously, they will secure advancement and the coveted title of Special Advisor to a senior cabinet or shadow cabinet member. And as a final flourish, the Westminster media will add their official imprimatur to the rising star by declaring them “one to watch” or one of the London power set’s “most influential people”.

Then comes the inevitable, obligatory reward for having been a good bag-carrier or churner-out of pedestrian political speeches: the gift of a safe seat at the next election (sometimes the second tier of Bright Young Things have to prove their worth by fighting a lost cause in a non-target seat before being thus rewarded). And so the cycle of patronage continues, with the newly-elected career politicians cultivating a circle of supporters several years their junior, rewarding them in the same way for services rendered. That’s how the SpAdocracy works.

It doesn’t have to be like this. We don’t have to keep electing parasites like Torsten Henricson-Bell – people who have done nothing outside of politics and who know nothing of life’s challenges – to represent us in parliament (and be assured, that is where Henricson-Bell et al are heading in 2020). We don’t have to keep surrendering our politics to the well-connected, perfectly-manicured, impeccably-credentialed Bright Young Things who treat the great questions facing our country as nothing more than risks and opportunities to be navigated in their private Westminster Village Game of Thrones.

Local constituency associations don’t have to nominate these half-baked, self-entitled people. Hardworking volunteers don’t have to pound the streets handing out leaflets and knocking on doors in support of candidates who look down on them as resources in the same way that a medieval baron looked down on the peasants who farmed his land. But most importantly, jaded and cycnical voters don’t have to reward these people by putting a cross next to their names on election day and enabling their effortless glide into Parliament.

Many things need to happen in order to rescue British politics from the technocratic, ideologically barren doldrums in which it now languishes. But we could do far worse than to begin with a purge of all these party-machine know-nothings, people so used to aping The West Wing (or more often The Thick Of It) in the futile search for profundity that they couldn’t come up with an original or inspirational political idea if their lives depended on it.

And we must strike now, when – having led at least one of Britain’s two great political parties to complete and utter electoral ruin – the shine is finally starting to wear off the Bright Young Things.

Now, at long last, the time is ripe for a cleansing Bonfire of the SpAds.

This article was written in response to the Guardian’s excellent and revealing long-read piece, “The undoing of Ed Miliband – and how Labour lost the election”, which can be read here.

14 thoughts on “Bonfire Of The SpAds: How The Bright Young Things Ruined British Politics”