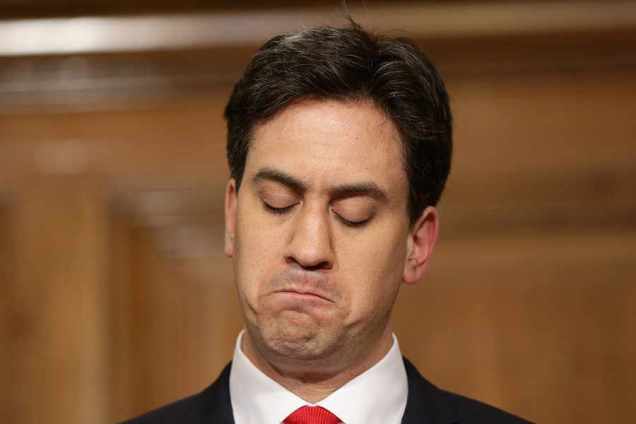 Why isn’t Labour working? Or more specifically, why did Ed Miliband so utterly and completely fail to make any inroads against what was at best a minimally popular coalition government and Conservative Party after five years of austerity policies?

Everyone seems to have woken up brandishing their own explanation  in the wake of David Cameron’s remarkable victory. Unlike this blog, many of these captains of hindsight could typically found cheering Ed Miliband and eagerly anticipating his victory in the preceding months and years – but some of their arguments are still worth considering.

Jason Cowley, editor of the New Statesman, comes late to the party in his realisation that Ed Miliband’s messianic view of himself as a transformative future leader of Britain masked a gaping chasm where his vision for Britain should have been:

He lost the election and the argument. If Labour doesn’t understand this, and adapt accordingly, it is in deeper trouble than even I believed.

Driven by a kind of messianic self-belief, Miliband was Labour’s most unashamedly Left-wing leader since Michael Foot, whose 1983 election defeat condemned the party to a long, painful period in the wilderness as Margaret Thatcher accelerated her transformation of Britain.

On the occasions when we met, he told me again and again that the financial crisis and the consequent Great Recession had created what he called a moment of great opportunity for the Left.

Absorbed by the work of Left-wing economists and philosophers, Miliband was convinced that the British people yearned for a more egalitarian society and a return to socialism.

Perhaps they did in Scotland, but certainly not in the seats in the Midlands, Home Counties and southern England that Labour must win if it is ever to return to power.

‘Under Miliband, we had nothing to say to the faraway towns of England,’ one senior Labour figure told me.

By which he meant, Miliband’s cerebral socialism might have been popular among metropolitan liberals but it emphatically did not resonate with the skilled working and lower middle classes in small towns in places such as Essex, Bedfordshire, Kent, Hertfordshire …

This is all true. There was a degree of intellectual superiority surround Ed Miliband’s rarefied vision of a post financial crisis Britain. And multiple journalists who have interviewed Miliband attest to this singleness of purpose and vision – albeit a purpose he never successfully explained to the British people.

But it is the misplaced stench of moral superiority, not intellectual superiority, which stands out as the most offensive of Labour’s characteristics as they fought the 2015 general election campaign.

Since David Cameron and Nick Clegg crossed the threshold of 10 Downing Street in May 2010, the British left has been hammering away at the same worn out theme, suggesting that the Conservatives were embarked on an ideologically driven mission to hurt the poor and vulnerable, and that people who supported them are in some way morally deficient or complicit in a genocide against the disadvantaged or the disabled.

Only a month ago, this blog warned that it was arrogance – borne of Labour’s moral superiority – that would cost them the election:

It is almost as though [they think that people] who put their cross next to the Conservative candidate back in 2010 were not just guilty of making a political error, but were actually complicit in some terrible act of genocide or human rights abuse. Five years later, goes this sanctimonious mindset, those ungrateful voters who had the temerity to spurn Gordon Brown’s benevolent Labour Party will have learned the error of their ways, seen sense, and come meekly crawling back to Team Red.

This is what happens when you live in an ideologically airtight bubble and subsist on a diet of left-wing talking points and spin. To die-hard Labour supporters and others on the left, it may well be received wisdom that austerity was an unnecessary evil, a savage attack on the most vulnerable people in British society. But it is not necessarily seen this way outside the bubble.

Outside the bubble, many people continue to believe that the state had grown far too large and all-consuming after thirteen years of Labour government. Outside the bubble, a lot of people think that welfare reform was and remains an urgent necessity, if not to save the taxpayer vast sums of money at least to encourage self-reliance and self-sufficiency rather than indolence and dependency. And outside the left wing bubble, many decent, thoughtful British citizens simply want a smaller government, and to keep more of their own money to spend as they please.

The Labour Party, hermetically sealed in a bias-reinforcing bubble of similar opinions, convinced themselves that their spin was true – that they were better, more ethical people than their conservative neighbours, rather than just holders of different political opinions. Worse still, they came to see anyone who did not subscribe to their narrative as being somehow morally deficient.

The most revealing moments on TV and Twitter last night, as the exit-poll results were unveiled and the first results came in, involved the utter incomprehension of liberal observers and Labourites. They couldn’t believe what they were seeing. ‘But the opinion polls said we would do well’, they all said, confirming that these politicos and observers no longer rub shoulders, or anything else, with the masses and have thus become completely reliant on opinion pollsters as a kind of conduit to the little people: modern-day tea-leaf-readers who might reveal what They are thinking. The Twitterati — the time-rich, mostly left-leaning set, consisting of cultural entrepreneurs, commentators and other people who don’t work with their hands and can therefore tweet all day — were especially dumbfounded by the results. Boiled down, their pained cry was: ‘But everyone I know voted Labour.’ They know nothing of the world beyond Twitter, the world outside the Guardianista colonies of London, out where people work rather than tweet.

It tells a bigger, longer, more historic story about what is becoming of Labour: it is shifting from being an outlet for the expression of trade unionist and working people’s interests to being a kind of encampment for the chattering classes, a safe space, if you like, for a secular, pseudo-liberal clerisy. The shrinking of Labour in Scotland and other parts of the country at the same time as it is consolidating in London expresses physically what has been happening politically for many years: Labour, having ditched its old principles and lost its old supporters, has become a shell that has slowly but surely been taken over by a new middle-class, professional, media-based, mostly London set. Bereft of its founding mission and traditional support base, Labour has been turned into little more than a shield for this new post-class, post-traditionalist clerisy, a PR machine for the pursuit of the narrow professional ambitions and petty moralism of a section of the cultural elite.

There it is: the pseudo-liberal clerisy. One of the most significant and concerning explanations for the gulf between the support Labour believed they had in the country and the result they achieved on election night is a direct function of the fact that in too many cases, Labour simply no longer has a direct line to the people any more. This is a stunning indictment for a party that continually boasts of its commitment to the working man or woman.

Where once the ranks of Labour MPs would have been filled by many people of working class backgrounds – former coal miners and factory workers who typically entered politics through the trade union movement – today, the party’s front bench and overall profile fits much more closely with the bland uniformity of the political class. Current MPs and rising stars have been former SpAds or worked for MPs as researchers or assistants before themselves entering parliament, utterly divorced from the real life of work as experienced by most Britons.

Others, including the relatives and descendants of famous Labour politicians, are parachuted in to fight safe seats, ensuring that certain left wing family dynasties – the Benns, the Straws and the Kinnocks – never have to relinquish their right to rule. Quite an achievement from the party of equality and opportunity for all.

The net consequence of all these failings was a Labour Party supremely assured of the moral force of its platform, confident of electoral success and convinced that the country was with them – simply because Labour activists up and down the land just happened to be tweeting and retweeting the same left wing platitudes. And this ignorance continued right up until the moment when the exit poll caused the bubble to collide with reality and burst.

This is why we now see such hysterical, preening, over-the-top despair mixed with moral posturing from some on the left:

Until the exit poll came in, it was simply inconceivable to many on the left that there could be any result other than a rainbow coalition of Britain’s left wing parties, coming together to lock the Evil Tories out of Downing Street and immediately get to work cancelling austerity and providing everyone with material abundance through the generosity of the magic money tree.

While some felt that Labour did not go far enough in their anti-austerity agenda, most were still wrongly convinced that a vote for Labour was the only moral option, and consequently the most likely outcome. The psychological shock inflicted on supporters between 21.59 and 22.00 on the evening of May 7 must have been considerable.

Labour’s loss was utterly knowable and utterly predictable, but they should be given space to mourn for a few days under the temporary leadership of Harriet Harman. But then they need to grow up to survive, and fast.

Labour lost the 2015 general election because they increasingly stand for nothing, having gradually lost touch with the party’s roots and founding principles – and because they created a two-dimensional caricature of their right wing opponents (stupid, selfish, mean-spirited and xenophobic) and campaigned against this straw man, essentially shaming Conservatives and UKIP supporters to keep quiet about their beliefs.

And when people are reluctant to admit their current political views because of the toxic anti-Tory and anti-UKIP sentiment fermented by Labour, how on earth can the Left engage with these people to change their hearts and minds?

Who knew that openly vilifying other people for their political opinions would be the most surefire way to push Labour over the edge and into the abyss?

21 thoughts on “Why Isn’t Labour Working?”