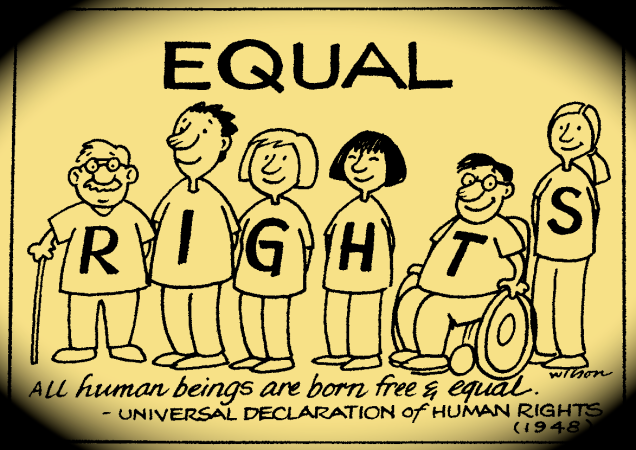 By now, we are used to the continual cheapening and debasement of the term ‘human rights’, transformed from the noble assertion that every individual is entitled to live in freedom and security to its new meaning as code word for the petulant, open-ended demand for benefits and services funded by other people.

This much is not new – almost every swivel-eyed anti-austerity protester seems to have a tale about how the Evil Tories are callously and deliberately violating their ‘human right’ to something or other. And as small government conservatives or libertarians we must continue to contest these fatuous claims as best we can. But now, those people who believe that their life circumstances endow them with a government-enforced claim on the wallets of their neighbours without so much as a thank-you have won themselves a new ally: the United Nations.

From the Herald Scotland:

United Nations officials will visit the UK in the next few months to investigate whether Iain Duncan Smith’s welfare reforms have led to “grave or systematic violations” of disabled people’s human rights, the Sunday Herald can reveal.

The only surprise is that this has not happened sooner, some time in the last parliament. After all, when your existence in a left-wing echo chamber destroys your ability to construct an intellectual argument or engage with those who think differently, the only remaining option is to appeal to outside bodies to bully, shame and intimidate your opponents into reversing course.

The British people, having just elected a majority Conservative government, have sense enough to realise that moderate centre-right policies which aim to encourage people back into the labour market where possible are not tantamount to a holocaust of the sick and disabled. But the Left have no intention of honouring the result of the election – if they cannot win at the ballot box, they will use the United Nations as a cudgel with which to beat the Tories into submission and a humiliating climbdown.

It should not be necessary to state that cases of benefits being wrongly withdrawn or sanctions applied without good cause are unacceptable. And to the extent that a targets-driven culture in Job Centres has led to unnecessary human suffering brought about by the overzealous docking of benefits, those directly responsible should be held accountable. But to suggest that bureaucratic incompetence and administrative errors amount to a deliberate infringement on the human rights of the sick and disabled is a leap which can only be taken if you swallow the Kool-Aid and believe that all Tories are heartless, evil people for whom human suffering is the goal.

Unfortunately, this view is on the rise, as shown by every stale internet meme which attempts to paint Iain Duncan Smith as some kind of monster:

But rather than spend the next five years running to the United Nations every time the government takes broadly popular measures to trim the welfare state, it might be quite refreshing if the Left would come up with some welfare solutions of their own.

If sanctioning benefits for failing to attend Job Centre interviews is cruel and inhumane, should benefits be doled out blindly and indefinitely with no reciprocal demand for action on the part of the claimant? And if not, what would a “fairer” sanctions process look like? It’s not enough – particularly for Labour, who in theory aspire to being a party of government again – to simply criticise what exists already. We need to hear concrete proposals for how Labour would run things differently, and if they intend to run a welfare system where benefits are never suspended for any reason lest it infringe on the ‘human rights’ of the claimant then they should come clean and say so. Vote Labour – unlimited welfare for all!

And what of the hated ‘bedroom tax’ – are the Left opposed to the principle or the execution? Should it be the case that people are granted a council house for life, with occupants allowed to remain in unnecessarily large properties despite the pressure on social housing and the long waiting lists for accommodation?  If not, what evidence is there that a voluntary scheme encouraging social tenants to downsize would work? Again, if Labour believe that it is okay for the state to act as your landlord in perpetuity, respecting your ‘human right’ to live in the same taxpayer-subsidised accommodation regardless of any change to your circumstance, they should come clean and say so.

And yet the Left will never come clean in this way, because to state their demands openly would be so repellent to voters that it would make Jeremy Corbyn look like the very model of centrist appeasement. The Left cannot admit the truth about what they want – benefits forever for everyone with no means test, no requirement to look for work, no checks to see whether medical circumstances have changed and for the state to be landlord to everyone in Britain – because unrestrained, corrupt pseudo-socialism of this kind would scare away more voters than it would attract.

No, the British political Left are now much happier as they are, in opposition. Having incessantly ramped up the size of the welfare state during thirteen years of New Labour government so that over half the population are net dependants on the state, the Left are free to howl in outrage when government spending moves in anything other than a strong upward direction, and – as we have now seen – go running to the United Nations as though David Cameron and George Osborne were running some kind of illegal eugenics programme.

It must feel really good inside this ideologically certain bubble, where you and your left-wing chums are the plucky forces of good and everyone else is an Evil Tory monster. And it is so easy to sit on the sidelines and scream about concocted ‘human rights’ abuses rather than do the intellectual heavy-lifting of coming up with alternative policies to move more people into work and help more people live self-sufficient lives. But it is not the behaviour of a serious political force, let alone one which aspires to wielding power again any time soon.

But furthermore, it is high time the Left acknowledged that a policy can be wrong, or counterproductive, or contrary to what they would do themselves, without being tantamount to a war crime or human rights abuse. Different people can look at an issue and come to quite different opinions as to how to solve it based on their genuinely held political convictions. But it becomes almost impossible to foster meaningful dialogue and exchange of ideas when one side is publicly accusing the other of being an accessory to murder.

Disagree with Iain Duncan Smith’s changes to ESA and other benefits? Fine – but come to the table with your own alternatives. If you think that the status quo is great, with people festering for years on benefits who could otherwise be helped toward self-sufficiency, then have the intellectual honesty to say so. Or if you think that the welfare state should be far more generous in its support and far less demanding of evidence to support claims, then present your proposals – and the accompanying tax bill – to the British people for their consideration.

Just don’t go running off to the United Nations because you didn’t get your way on May 7 – it is the desperate and cynical action of those who have definitively lost the argument.