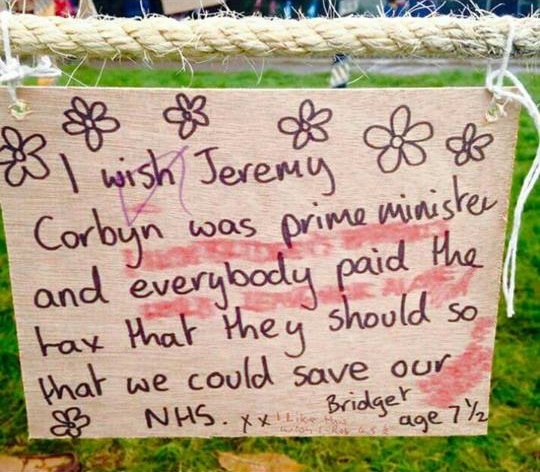 Thus far, Jeremy Corbyn’s elevator pitch for power would be more at home in the school playground than the adult political debate

When your core political argument and pitch to the electorate can be easily summed up in crayon by a seven year old girl, it’s time to develop a more robust vision for government.

A first good step for Labour to take would be to stop fomenting or tacitly condoning behaviours like these, from activists and supposed supporters:

I’ve written before about how, in their incoherent rage at the supposed transgressions of the Evil Tories, the Left are in great danger of becoming the British left wing equivalent of the American Tea Party – morally certain, impervious to facts, intolerant of the slightest internal dissent and quick to anger when contradicted by outsiders.

Where the Tea Party blindly venerate the US constitution (though they read it selectively, and from a highly originalist perspective) and would see the federal government shrunk back to its nineteenth century bare bones, the Corbynite Left venerate “our NHS” (genuflect) and the other monolithic edifices of the welfare state stemming from the socialist post-war consensus.

Neither seem very comfortable living in the present. And the worst excesses of both would be more at home stapled to the wall of a primary school classroom than reported and printed as serious ideas in the pages of a national newspaper.

3 thoughts on “The Daily Smackdown: Labour’s Pitch For Power Is A Child’s Temper Tantrum”