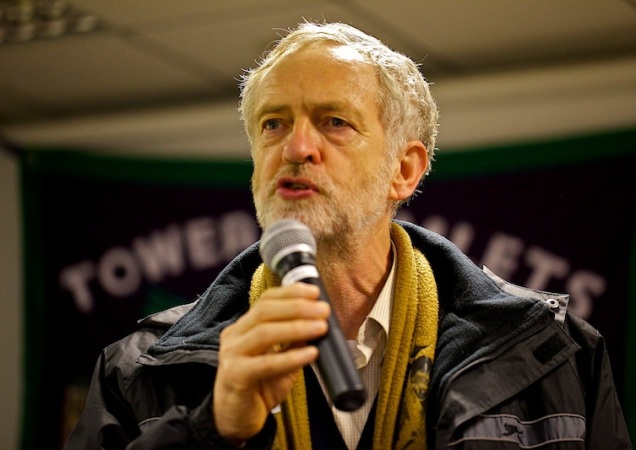 Labour’s ruling elite are stoking up fears of ‘entryism’ as an excuse to shut Jeremy Corbyn out of the leadership contest and preserve their hegemony.

For every day that Jeremy Corbyn’s star stubbornly refuses to fade in the Labour leadership race, another Labour Party grandee seems to come crawling out of the woodwork blaming the sinister forces of ‘entryism’ for dragging the party unelectably to the left.

Commentators of every political stripe are now spitting out the term ‘entryism’ like it is a dirty word, and we are expected to hear the word and share the elite’s outrage that a political party is in danger of actually representing the people enthusiastic enough to play a part in its governance. But in fact, all the fuss about Jeremy Corbyn’s increasingly plausible leadership candidacy really proves is the absolute terror felt by the political elites when people with vibrant, non-centrist political views seek to make their voices heard.

(The formal definition of ‘entryism’ is: “a political strategy in which an organisation or state encourages its members or supporters to join another, usually larger organisation in an attempt to expand influence and expand their ideas and program.”)

So worried are the people most responsible for driving British politics into its current centrist malaise that some of them are now openly calling for the Labour leadership contest to be scrapped or deferred, until the ‘menace’ of people exercising their democratic right to vote for the leadership they want can be properly suppressed.

From The Times today:

Harriet Harman has been urged to suspend the Labour leadership race after evidence emerged that hard left infiltration is fuelling a huge surge in party membership.

More than 140,000 new activists are projected to have joined by the deadline for registration to vote, a rise of more than two thirds since the election, with many signing up to back the hard left candidate Jeremy Corbyn.

The Communist party of Great Britain has called on supporters to join and back Corbyn as part of its revolutionary “strategy” while Green party activists have also been discussing how to vote for him.

Labour MPs say their local parties have been flooded with new members, most of them supporting Corbyn, the MP for Islington North, who polls have suggested is the frontrunner in the leadership race.

Let’s be serious. This isn’t about the Red threat from Britain’s oh-so-powerful Communist Party. And it’s not even about the few hundred bored Conservative Party activists who have parted with £3 in order to mess around with their Labour rivals. This is about Labour’s professional political class being absolutely terrified that someone from ‘Old Labour’ is threatening to bring their hegemony to an end; the gnawing fear that Jeremy Corbyn speaks to the disillusioned party base in a way that the slick, besuited, well-manicured and telegenic establishment rival candidates never can.

And yet surveying the scene, The Times’ Philip Webster concludes:

With apologies to Gershwin, it may be time in the eyes of many Labour MPs to call the whole thing off.

But the idea of the Parliamentary Labour Party sensing the threat of an authentic challenge to their dull, technocratic, centrist rule – and moving to stop the contest when it threatens to raise up a victor they don’t like – isn’t really a laughing matter, is it?

When the ruling elites of other, less democratic countries perform similar shenanigans in order to solidify their grip on power, bien-pensant commentators fly to their keyboards in furious outrage, and urge solidarity with the people and their democratic demands. And yet when the same thing happens in Britain, the same people view it as a threat to the natural order and seek to suppress the uprising using every trick in the book.

When the European Union showed its true colours by bullying Greece into accepting a non-viable economic rescue package in the face of overwhelming public opposition in that country’s referendum, many on the Left were quick to paint this as an appalling anti-democratic attack on a sovereign nation – with some crossing the Rubicon to become full-fledged eurosceptics. And yet many of those people who were loudly cheering for Greece are now incensed that a democratic process within the Labour Party may throw up a result that they do not like.

The Labour elite are crying ‘entryism’ as though the current influx of motivated, left-leaning activists is a bad thing, but the elite are themselves the beneficiaries of a mirror phenomenon that could be called ‘exitism’. Exitism is the process whereby a once diverse and intellectually vibrant political party becomes captured by a small, professional elite who drag the party to the political centre, preferring dull technocratic government over real, vibrant democracy.

With exitism, the political elites do not have to vanquish their more ideological foes through direct confrontation; once in positions of leadership they simply make the party so tediously boring, so far removed from its founding principles, that people with real ideas and vision simply become disenchanted and leave. Sound familiar?

Underlying much of the criticism of Jeremy Corbyn – and these concocted fears of entryism – is the belief that the assumed political views of millions of dull, disengaged, apathetic swing voters should somehow trump the known views of the committed thousands who actually care about their politics and view elections as something more than the lazy selection of barely differentiated policy options from a never-changing menu.

But why should our political parties fall over themselves to flatter and beguile the swing voter who can barely be bothered to look up from The Great British Baking On Ice Factor to cast their vote on polling day? Do they not realise that it is the desperate stampede to appear the same, to look non-threatening and non-ideological, which lulls people into not caring about elections in the first place, and that people would be more inclined to vote if elections actually had real consequences?

Some commentators have suggested that growing voter apathy is actually a good thing, that it means our society has become so stable and prosperous that we can afford for politics to become the sole preserve of the policy wonk, the pub bore and the technocrat. But this is nonsense – any short stroll outside of Britain’s most fashionable postcodes makes it perfectly plain that we do not yet live in any kind of Utopia.

With the new challenges facing our country and the world – from globalisation to technological progress – we have more need than ever for politics to be a place where competing visions for managing this progress can be debated and tested. But instead we have dull, technocratic policy debates and juvenile, manipulative point-scoring over which party will best manage our public services. When we should be choosing a world leader capable of seeing the big picture and strategically positioning Britain for growth, we are instead determined to elect little more than a Comptroller of Public Services.

Yes, of course Jeremy Corbyn’s unreconstructed socialist policies hark straight back to the 1970s and 80s, and would inflict massive damage on the United Kingdom were they ever enacted. Punitive top rates of income taxation, entrepreneurship-sapping regulations, investment-hostile corporation tax rates, unconditional welfare for everyone, a foreign policy of appeasement and unilateral nuclear disarmament – these policies, all embraced by Corbyn, would gravely retard our country and diminish us on the world stage.

But that does not mean that these ideas should not be heard, or that those who advocate them should be shut out of the political process by a bipartisan collusion of centrists. The enthusiasm for Jeremy Corbyn’s candidacy is real, and refreshing – the people who now mob him as he appears at campaign events are not Young Communists seeking to infiltrate the party to do the work of the Soviet Union, they are simply excited to see a left-wing alternative that does not look and sound so much like David Cameron’s Coke Zero Conservatives.

At present, Liz Kendall and Jeremy Corbyn are the only two candidates who show the desire and ability to lead their party, rather than simply follow it. And yet when Liz Kendall tries to force Labour to come to terms with public revulsion at Milibandism, she is ruthlessly attacked and called a closet Tory. And now, when Jeremy Corbyn tries to offer a genuine old-school socialist alternative, the party elite tries to whip up absurd fears of a communist takeover to see the the whole contest scrapped and restarted without him.

Like it or not, there remains a sizeable body of popular thought in Britain which wants to see higher taxes on the rich, more regulation on business, greater state largesse all round and a naive foreign policy based on the appeasement of each and every threat which comes Britain’s way. We already know that freezing these opinions out of the political debate does not work – even when defeated in national elections, eventually they will find a means of expression, as the SNP landslide in Scotland has aptly demonstrated.

There is also a smaller – but no less passionate – body of thought which would like Britain to move in far more libertarian, small government direction, recognising that the old edifices of the post-war consensus and the Welfare State have served their purpose and urgently need to be replaced. But these ideas, deeply cherished by this blog, will likewise never see daylight so long as a centrist Labour Party and a centrist Conservative Party make any such policy discussion seem dangerously extremist by comparison.

Ultimately, the people who stand to benefit most  from the excommunication of Jeremy Corbyn from the Labour leadership campaign – or the recent defection of Douglas Carswell and Mark Reckless from the Conservative Party, for that matter – are the calculating, triangulating forces of centrism, the permanent political class who covet power for power’s sake and are willing to pick up or discard foundational principles on a whim as they fight over the same sliver of centre ground.

All this hysterical talk about a communist takeover of the Labour Party is nothing more than the furious squealing of an indolent, cosseted political elite who feel entitled to power and are terrified that Jeremy Corbyn – with his inconvenient principles and awkwardly fixed beliefs – might see the party out of power for another decade, thus thwarting their own carefully planned career progression.

But here’s a newsflash for these entryism scaremongers: the Labour Party belongs just as much to the hopelessly naive eighteen year old socialist student as it does to the ambitious SpAd hoping to contest a safe seat in 2020.

And if the choice is between spending £3 to prise open a sliver of daylight between the Labour and Conservative Party positions, bringing real political debate back to Britain, or sitting back and perpetuating the uninspiring status quo, then all of us should be lining up to become honorary Labour Party members.

3 thoughts on “Stop The Anti Jeremy Corbyn Hysteria: ‘Entryism’ Is Not A Dirty Word”