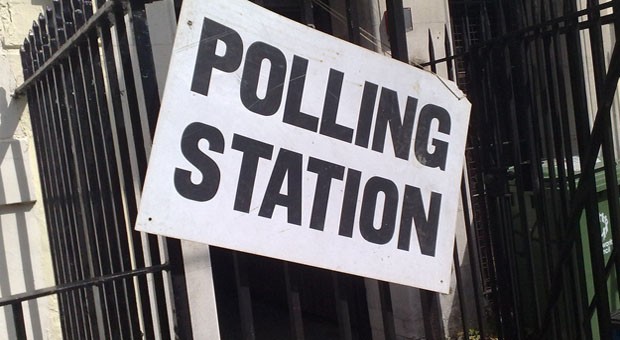 It speaks volumes about the dire state of our politics and our democracy that best thing yet written about the 2015 British general election campaign is not a stirring paean to any of the political parties – not even one of the populist insurgents – but an angry, snarling article which mocks the illusion of voter choice and actively discourages people from bothering to vote at all.

And no, it’s not another Russell Brand intervention – he of The Trews sold out spectacularly this week, urging his legions of fans to vote Labour and install Ed Miliband in 10 Downing Street because apparently “this bloke will listen to us”. As if.

The true standard bearer for the politically engaged but fiercely indifferent contemporary British voter is Spiked editor Brendan O’Neill, who lets rip against the stale centrism of British politics with a powerful piece in The Spectator entitled “I’m not voting on Thursday – but don’t you dare call me apathetic“.

Directly contradicting the endless conveyor belt of career politicians who have been telling us incessantly that this is the most important election for a generation (as was the last, and the one before that), O’Neill writes:

Well, I’m not voting on Thursday, and don’t you dare call me apathetic. It isn’t indolence of mind — ‘sluggishness, laziness, love of ease’ — that’s keeping me out of the voting booth. On the contrary, it is an agitation of mind, a love of difficulty, that’s making me withhold my vote.

I, like many others, want my politics hard, existential, frightening even, addressing the biggest questions facing humanity: freedom, progress, morality, war, the future. But all we’re being offered is a choice between managers, primarily of Britain’s economic decline. ‘Who will YOU trust to shave the public deficit?’

This blog fully shares O’Neills frustration that British politics has become depressingly, soul-sappingly small – so small that we now expect our national leaders, our elected representatives on the world stage, to concern themselves not with real affairs of state but with relative trivialities like local hospital closures and whether or not the trains run on time.

The leader of one of the most economically, culturally and militarily powerful countries on Earth should not and (if we want them to be successful) can not afford to concern themselves with the minutiae of public service delivery and efficiency savings. Such details are the proper work of local politicians, local government officials and the civil service, supported and augmented by the private sector.

And yet this is all we seem to expect of our politicians nowadays – we have given up any hope of real leadership and would now settle for semi-competent management of the state bureaucracy. We aren’t really electing a Prime Minister anymore, but a mere, lowly Comptroller of Public Services.

O’Neill is also correct when he mocks with bitter humour the political classes’ fruitless obsession with voter engagement, concentrating all of their energies on the medium rather than attempting to change the deeply unappealing messages:

Even the more lingo-conscious sections of the observing classes, who refer to the public as ‘the disengaged’ rather than ‘the apathetic’, tend to see our indolence as the problem. They’re forever dreaming up technical ways to engage with us, such as by putting voting booths in supermarkets, because of course we love to shop, us indolent, passionless fools. Or they employ celebs to try to prick our lazy consciences, even believing Dickensian eejit Russell Brand might act as a kind of guru-like conduit of their messages to the sleeping throng. Perhaps this long-haired warbler of phoney wisdom could stir the slumbering passions of the plebs — that’s the thinking.

They reduce what is fundamentally a political problem — a glaring, historic absence of substance — to a technical problem (‘maybe those idiots don’t know how to vote?’) or a communication problem (‘maybe if we spoke in mockney, they’d listen to us?’). With nothing of importance or depth to say, they obsess instead over how they say things.

But here is the core of O’Neill’s argument, and the simple depressing truth about our politics – so easy to ignore when we are being bombarded with campaign messages, urged to donate or volunteer and told that the outcome of this election will profoundly “change the country”:

For those of us who are seriously interested in big politics — not in simply finishing HS2 but in building flying cars; not in ‘balancing the books’ but in creating a futuristic world of plenty — the problem today is that we are technically enfranchised but politically disenfranchised. That is, we have the vote, but we have little to vote on. Our ballot has been robbed of its clout. That’s why many of us don’t vote — not because we’re unfeeling but because we feel politics is about more than this.

‘But people died for the right to vote!’, the apathy-haters cry. They died for a vote that meant something. As the most rabble-rousing suffragette Sylvia Pankhurst said, activists like her ‘did not want the Vote for academic reasons’; they wanted it in order to have ‘an equal chance to share in controlling the destinies of the nation’.

I must admit that this blog has been guilty of using the worn-out “but people died for our right to vote” line in the past, most recently at the time of the 2014 European and local elections. After careful consideration, I have to apologise and belatedly retract my call – save for a UKIP vote in Europe, there was absolutely no policy-based reason for anyone to have bothered to vote in that election.

But at least local elections are supposed to be dull and technocratic by their very nature. Local democracy is not supposed to be tremendously exciting, because it is at this level where the gritty, unglamorous work of deciding matters of local public service provision should rightly sit. Unfortunately in Britain, the power to determine these matters – which should properly rest with town and county councils – is instead concentrated at the centre, making every insignificant local decision the ultimate responsibility of the national government and the overriding personal concern of the Prime Minister.

It is this over-centralisation which is to blame for much of the dull, technocratic centrism which infects contemporary British politics and which so depresses Brendan O’Neill. When Westminster crowds out local government to the extent that your local councillor may just as well be a stuffed animal with a party rosette pinned to it, people naturally demand that national government caters to their every passing whim and takes an active control of the public services they use every day. But in demanding this level of “customer service” of our politicians we distract them and prevent all but the bravest from looking at – and acting on – the bigger picture.

O’Neill laments that “the vote is merely academic, a slip of paper that determines who will inhabit No. 10 but not the shape or growth or future of the nation”, but this need not be the case. A rebalancing of power from the centre to the home nations (and then again to the county and city levels) would allow our national political conversation to refocus on serious, ideological issues once again – and would have the added bonus of allowing different regions to try different approaches, bringing about a real competition of ideas.

This is particularly important because at present, monolithic British policymaking is particularly hamstrung by a lack of real-world counterfactual examples. For example, those on the left criticise the coalition government’s austerity measures and claim that reduced government spending harmed the recovery and caused unnecessary human suffering, but we can never really know whether a lack of austerity would have led to greater growth or precipitated an even worse economic crisis.

When all the major decisions are set nationally, there are no readily available counterfactual examples to inform policymaking. But more devolution of power to the home nations, regions and town councils would allow for more variety in government, and more ultimate vindication for one political philosophy for another – which in turn would inform and enliven the national political conversation.

But even if these changes were to be enacted today – and there is little to suggest that any progress will be made in the next parliament – it would be too little too late for Brendan O’Neill, who is absolutely right to castigate the lack of substance in this general election campaign. Britain’s main political parties are going to battle with the weapons they have to hand, which unfortunately consists of a skull-crushing lack of ambition for Britain, lots of vague promises to administer public services more efficiently and endless, over-hyped scaremongering about what the other side would do if they made it into government.

Thanks in part to Britain’s electoral system, there are already too many unfortunate reasons for not voting on 7 May – like being a UKIP supporter in one of the big cities, or a Conservative anywhere in Scotland. But even if you live in one of the handful of ultra-marginal constituencies where your vote really does carry weight, Brendan O’Neill’s questions should still gnaw at your mind: what’s the difference, and what’s the point?

This blog is not yet ready to take the leap and advocate not voting – I will be voting on 7 May, and believe that however broken and uninspiring our current politics may have become, much of the change this blog desperately wants will come first and foremost through and with the existing system.

But others take a different view and if, like Brendan O’Neill, some of these deeply politically engaged but profoundly indifferent voters choose not to sully themselves by making a choice between fifteen shades of awful, then their decision should be respected, maybe even admired.

Either way, they should never be accused of being apathetic. 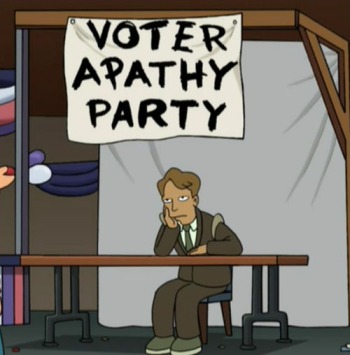