The Labour Party did not cause the economic crash or the recession, this is undeniable. Still, it is becoming a great diversion technique for those who are attempting to abdicate the previous government of all responsibility to focus entirely on this simple fact, and to exaggerate the extent to which people actually believe that they directly caused the crash.

Often those who deny that Labour were at fault at all for their economic policies then, in turn, completely oversimplify the actual causes by saying “it was the bankers”.  Clearly the global crisis was multi-layered and had may root causes including irresponsible and amoral behaviour from the financiers themselves, the central bankers and regulators who allowed them to behave in such a way and poor government policy and supervision of the whole debacle. It may make it easier to understand to simply blame one entity, but that does not make it true, or reasonable.

Still, Ed Miliband continues to deny that the previous government over spent and makes no apologies for its economic policy. This is deeply concerning because he and Ed Balls worked in the treasury and now want to run the country. The recent Question Time audience were not impressed by Miliband’s refusal to accept that Labour overspent, it may transpire that the wider electorate are equally unimpressed. I used to think it was spin, pure politics, but now I think he genuinely believes that the debt and deficit crisis we are now suffering has absolutely no connection to his own actions, or those of his chancellor Gordon Brown.

The point is this: although the Labour Party did not cause the crisis, did they responsibly manage the economy so that it was robust enough to deal with the end of the boom? Did the Labour government, who the public had no choice but to trust, spend tax payers money responsibly and exercise foresight and prudency in its guidance of the United Kingdom? The answer to these questions is a clear no. Naysayers may cry out that it is all so easy to say this with the benefit of hindsight, but I find the idea that the government should behave as if an economic boom will never end completely idiotic. We cannot let our rulers off the hook like that, no matter which party they represent.

From 1997 until 2001 the economy was managed prudently and the books were balanced. This however was not due to good policy from Labour but because they were operating according to the spending plans of Ken Clarke. The Conservative Chancellor reduced the budget deficit from £50.8 billion in 1993 to £15.5 billion in 1997. Gordon Brown then stuck to these policies which led to the elimination of the budget deficit by 1998 and a budget surplus until 2001.

On July 14th 1998 the Labour Chancellor, with his adviser Ed Balls cheering him on, announced his plan to double public spending in 10 years. This was his ideological mission, his great political project, his part in the New Labour revolution that would sweep across Britain and change her irrevocably. In the year 2000 Brown set in motion his attempt to transform Britain into a continental style economy by massively expanding the government, bloating the public sector and creating a huge population of state dependent citizens. He didn’t hold back, increasing the size of the state from 36.6% in the year 2000 to 50.2% in 2010 (half of which came before the economic crisis), a faster increase than any other country in the world. 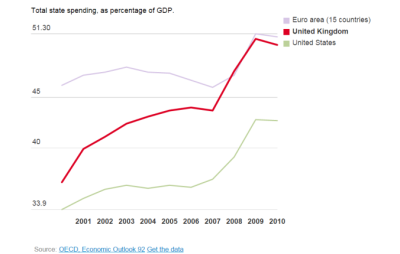 As much as he tried, Brown couldn’t squeeze as much tax revenue out of people and business as was necessary to fund the great expansion. So his spending spree was funded by debt. From about 2002 tax revenues fell short of spending. Although these were the “boom” years, the Labour government consistently made optimistic and unrealistic forecasts for tax revenue and fell short every year. From 2002 they ran a budget deficit between 2.5 and 3.5% of GDP, thus our government debt was rising when most other major economies were wisely paying off theirs.

Brown was almost unique in borrowing vast amounts during the boom against all common sense, this isn’t even Keynsian economics which would advise to pay off debt and reduce spending in the boom years. As a result of this irresponsibility the UK was unprepared for the crisis and had fewer options and little room to manoeuvre.

Leaked documents drafted by civil servants have since shown that the Labour Cabinet was asked: “we’ve spent all this money, but what have we got for it?”. The document warned that the efficiency of the public sector needed to improve drastically and stated that “ineffective spending” must be “closed down”.

There was clearly wide spread concern over the profligacy of the Chancellor. An analysis of spending plans written in 2006 for the 2007 Comprehensive Spending Review suggested that any increase in taxpayer expenditure should only be in line with inflation. It offers detailed plans for cutting spending by billions of pounds. Gordon Brown ignored the advice and increased spending by twice as much as the recommendation. When he became Prime Minister he increased spending by £90 billion.

When the crisis struck and Lehman Brothers went bust Britain’s debt had already increased 43% under Brown to fund the expansion of government. Labour was running a boom time deficit of 3% in 2005/06. The decision to overspend was quite deliberate and was continued with vigour even in the middle of the recession when they stubbornly implemented a huge spending splurge even while GDP was going backwards.

In 2009/10 the government was running a deficit of £156 billion, £126 billion of which was structural; that is to say, it was not the result of the recession but was due to spending. It wasn’t a temporary spend that went away after recession, it remained a vast annual over spend that had to be dealt with by the Coalition.

Countries that had exercised more restraint and had legislated to prevent the government increasing debt during an economic boom- e.g. Australia and Canada – fared far better than Britain when the crash came. It is therefore not credible to abdicate the Labour Party of all responsibility for the dire state of the British economy since the economic crisis.

Robert Chote, chairman of the Office for Budget Responsibility and frequent critic of Gordon Brown, and his colleague Jon Riley, have published as highly critical analysis of the UK’s financial situation entitled Crisis and consolidation in the public finances, from which some of my information has been extracted. Let there be no doubt, the undoubted myth that Labour directly caused the financial crisis is indeed a myth, but it is also a straw man. The inescapable reality is that the public finances were managed irresponsibly for years before the crisis and this meant that the subsequent austerity measures were far more difficult.

By the time we return to a budget surplus (whether by 2019 or 2020) and government spending is reined in to around 38% of GDP ; much of the actual composition of government spending will consist of welfare liabilities and interest rate payments rather than capital and departmental spending, a truly regrettable situation. Gordon Brown’s welfare addicted society, the cause of much of the overspending, will remain, while public services will be greatly diminished and several areas of government obliterated. 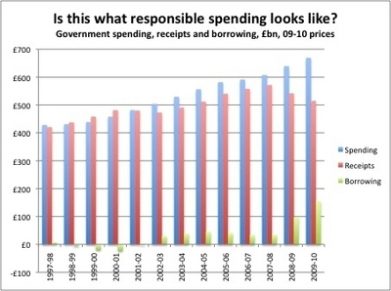 Under the Coalition government public sector debt has increased massively. Yet it is false to solely blame the current administration for rising debt. Rising public sector debt was inevitable and, some might say, desirable considering the poor economic performance, shrinking tax base and expansionary fiscal policy of the Labour government. It is pointless comparing the debt of 1997-2010 with the period 2010-2015 because it is a comparison of entirely different economic situations that required very different responses.

The debt figures have been used as a stick to beat the Coalition with by the same people calling for an end to “austerity”, but the only way to avoid adding to the debt would have been a far harsher policy of steep spending reductions. Arguably a hard line, short, sharp shock approach to cutting away the deficit in 5 years would have been too much for the UK to stomach both economically and socially. Some may argue that it would have been better for Britain in the long-term, but I am certain that the critics of “austerity” would have found such measures completely unpalatable.

When Britain had to be bailed out by the IMF in 1976 the Labour Chancellor reduced spending by 3.9% in a year, drastic times call for drastic measures you might say. George Osborne is intending on cutting spending by 3.9% over the course of 8 years. These cruel, harsh cuts are mythical. Government spending has still been vast, hitting £722 billion in 2014, compared to £673 billion in the last year of the Labour government. “Austerity” in the UK is a relative term.

Labour supporters are in denial about the over spending of the previous government, but you expect loyalists to be blinkered. It is the continued refusal of Ed Miliband and Ed Balls to face up to reality that is concerning and unforgivable. The economic profligacy of the Labour government led to a total collapse of United Kingdom’s fiscal situation. It did not cause the economic crisis but if left the country extremely fragile in the face of it.

There was a total lack of sensible forward planning, prudence, and responsibility on the behalf of the government that they were part of. Worst of all, the profligate spending and state expansion was all in the name of ideology and driven by pure hubris.

Gordon Brown’s former advisers were a part of this massive folly, one the greatest government blunders since the war. They refuse to apologise for it, or even to recognise it. Shame on them, for we are still suffering the consequences.

Originally published on The Sceptic Isle.

Ben Kelly tweets @TheScepticIsle and is on Facebook here.