Having made the immensely difficult decision to abandon the Conservative Party (which itself has largely abandoned its own conservatism in the successful hunt for centrist votes) and lend my vote to UKIP in the general election, I have been waiting expectantly for Ukipper buyer’s remorse syndrome to kick in with a vengeance.

Surely by now, in the cold light of day – and following a period of rather amateurish internal warfare over the party leadership – I should be consumed with confusion and shame at my actions? Well, two weeks on and I’m still waiting.

In some ways, this is only to be expected – UKIP actually declined in terms of Westminster representation, and to suffer buyer’s remorse one has to actually have gained something. And since a majority Conservative government was the least worst option of all the possible outcomes involving the major parties, again there is little cause for regret – we will finally have our EU referendum and a few more token efforts will be made to restrain the growth of the state.

But this isn’t why I have no regrets about my voting decision. I stand behind my choice because nearly every objection to UKIP’s policies – both in politics and the popular culture – is based on a two-dimensional cartoon villain caricature of what it is to be a small government eurosceptic, and because so very many of the people leading the anti-UKIP mockery are virtue-signalling simpletons who couldn’t construct a coherent political thought if one came packaged with IKEA-style self-assembly instructions.

Take this effort by Russell Howard, released just before the election, shown in the video above.

Howard begins by finding a video clip of a particularly ignorant young lady, a great product of the British education system, who opines:

I can’t get a job. If I paint myself black or talk in a foreign language I might get a job.

Cue Howard’s signature routine of facial contortions and “isn’t that crazy?” expressions. And yes, of course it’s crazy, not to mention stupid and offensive.

But is this really representative of mainstream UKIP thought, or the attitudes of the party’s committed supporters? There’s absolutely no evidence to suggest that this is so – or at least, what little evidence there is of UKIP’s supposed racism also damns nearly half of the entire country.

And the worst is yet to come. Howard then goes on to say:

“Mind you, not everyone is affected by the fearmongering talk of immigration. Did you see the wonderful answer that this kid gave?”

Cut to a classroom and a group of schoolboys being interviewed about their political views on Sky News:

REPORTER: You’re fine with having a mate from Poland, Bulgaria…?

SCHOOL BOY: Yeah. It’s no problem with us.

REPORTER: What do you say to a guy in Westminster, House of Commons, who says it is a problem?

SCHOOL BOY: I say they need to buck up.

Cut back to studio audience laughter, and an ecstatic Russell Howard, who exclaims:

“I salute you, you little legend!”

What complete and utter tosh. Obviously the Sky News reporter is at grievous fault for suggesting that there are some “guys in Westminster” – presumably talking about UKIP’s contingent of two MPs at the time, both very honourable men – who think that it is wrong to befriend people from other countries, or eastern Europeans in particular. Not only is this an incredibly leading question, it’s also a patently false statement.

Rabid EU enthusiasts and other saboteurs of the nation state may like to blur the distinction between opposition to unlimited immigration and hatred of individual immigrants as their primary modus operandi, but a national news broadcaster should know better than to toe the same unthinking line. 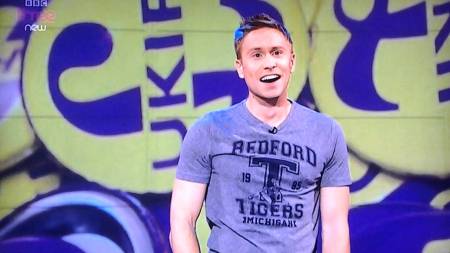 But more than this, there is something deeply worrying – and almost immoral – seeing a child being gently steered toward a prescribed, misguided political view by an authoritative adult in this way, all captured on live television. By stripping away half of the facts and presenting the child with a bogus straw man argument, the child naturally chooses the only sane option. But this is then portrayed back to us (via Russell Howard) as evidence that the “enlightened” child is so much wiser and more tolerant than the Neanderthal adults who support UKIP.

Time and time again we see this distortion of UKIP (or generally right wing) thought. Usually the pro-Europeans and unlimited immigration fanatics do not stoop to involving a child in their propaganda – but regardless of who is involved, the false arguments, partial facts and contortions of logic are always the same.

If there really was a political party with seats in Westminster that openly spoke out against fraternising with people of different races or backgrounds, then this would be absolutely, viscerally abhorrent. It would be to the great shame of Britain, and the voters who elected such people to high office. But of course there is no such political party in Westminster.

There is, however, one political party in Westminster that dares to speak out (however inartfully it may sometimes be) against the general pro-European consensus among the British political establishment. There is one party that recognises that the risk and disruption-minimising instincts of big business are not always aligned with the interests of the British people and their need for accountable democracy, and so speaks out in favour of strengthening the nation state rather than undermining it through remote and undemocratic pan-national institutions.

And there is one party which has made the unpopular case that while managed immigration brings many benefits to Britain, any benefits from unmanaged immigration are not usually felt by the low-skilled workers who face stiffer competition in the job market and greater strain on the public services on which they disproportionately rely.

You can disagree with everything that UKIP stands for and do so with honour. You can support the eventual ending of the nation state and the move toward international government structures because you genuinely believe this to be a good thing. You can support unlimited, unchecked immigration while believing that concerns about community cohesion, strains on infrastructure and the effect on the job market are overblown. All of this can be done in good faith and with good spirits.

On the other hand, you can be like Russell Howard, someone who finds it much easier to see the world in black and white while using opposing political views as fodder for his second-rate comedy act.

But it’s not really about Russell Howard. The real problem is that the level of opposition to UKIP and eurosceptic ideas in Westminster and the media is of the same low calibre. Questioning the unevenly distributed benefits of mass immigration is dismissed as “fearmongering” by too many politicians and pundits, people who find it easier to bury their heads in the sand rather than face the possibility that something which works so well for them and their own social circles may be having quite a different impact on other, less privileged Britons.

Today sees yet another exercise in reality denial by the Conservative Party, who are announcing their latest plans to curb immigration – now stated as an “ambition” to reduce net migration below 100,000 rather than the cast iron guarantee of 2010. Now, as then, everyone knows deep down that the plans are unworkable, even as they report on them.

Buoyed by their outright election victory, the Tories are also eager to bring forward the promised EU referendum to 2016 in the hope of a quick renegotiation and a quick win, much as they did with the AV referendum in 2011. But of course one year is hardly enough time to achieve agreement on the kind of deep rooted reform required to win over any but the most superficial of eurosceptics.

Only one party recognises this fact and remains sceptical of the motivations behind the Tories’ accelerated manoeuvring. And behind all of this lies the key fact that, backbench rebels aside, both of Britain’s two main political parties are desperate for us to remain in the European Union, no matter the cost.

As Brendan O’Neill argued so magnificently just before the general election, we need proper political choice back on the table in Britain, an end to the centrist dystopia of the post-Thatcher years. And that means a Labour Party that once again stands up for people who work (rather than the moralising, middle class clericy who have hijacked the party) and a Conservative Party that really believes in smaller government, greater freedom and moving beyond the tired dogmas of the post-war consensus.

Such ideas may not yet enjoy majority support in Britain, but I believe their time will come again. And I will certainly not be cowed into recanting my views by mockery from second-rate comics such as Russell Howard, nor by opportunistic politicians who only ever engage with the rhetoric, not the substance, of the debate.

7 thoughts on “Voting UKIP – No Buyer’s Remorse Yet”