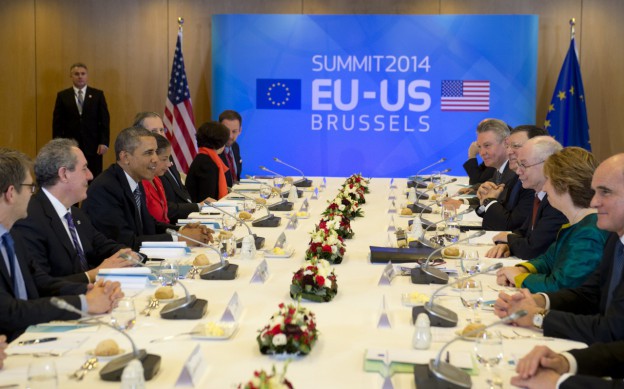 The harshest critics of President Obama like to complain that the 44th president of the United States does not believe in American exceptionalism.

But today Barack Obama proved these fears to be unfounded – he does indeed believe that America is different and better than all the other countries of the world. And he did so by using an intervention at the G7 summit in Germany to pointedly suggest that a diplomatic settlement which the United States would never accept for itself (membership of a supernational body with sovereignty over the US government) is perfectly good enough for Britain, America’s closest ally.

Mr Obama’s comments came as he met Prime Minister David Cameron for talks in the margins of the G7 summit of world leaders in Schloss Elmau, Germany.

They are the strongest indication yet that Washington wants a Yes vote in the referendum which Mr Cameron has promised by the end of 2017 on whether Britain should stay in the EU.

Greeting Mr Cameron at the start of the bilateral talks, Mr Obama said the US-UK relationship remains strong, telling reporters: “We have no closer partner around the world on a whole host of issues.”

It should be noted that by making these pro-European interventions, President Obama is only repeating the longstanding American diplomatic position, which is that Britain should remain part of the European Union, come hell or high water.

Unfortunately, both hell and high water are now nearly upon us thanks to the suffocating economic and political embrace of the Old World, and it is high time we stopped giving any weight or consideration to American entreaties for us to do what is most convenient and beneficial for their own foreign policy over and above what is best for Britain. The United States would certainly like for Britain to remain in the European Union. But don’t take this as a sign of some overriding concern for the future of the UK’s economy or the health of our democracy – far from it.

The real reason for American concern over a possible Brexit is the potential instability that a British withdrawal could provoke among their other European trading partners, meaning that the State Department could no longer ignore Europe, knowing that the whole continent is in the safe and predictable hands of the EU technocrats.

From an American perspective, it is much easier when they have only one telephone call to make when negotiating foreign policy, or one bureaucrat to meet with when discussing trade matters. In this way, the EU effectively serves to corral the countries of Europe into an easily understood and easily managed formation, ripe for the other great powers of the world to manage and outwit at their leisure. But there is absolutely no reason why Britain should continue to enable this behaviour by remaining a member of this failed and unwanted political union.

The United States of America remains our closest ally, and this should always remain the case. But we cannot afford to be sentimental – the United States will always act muscularly in its own economic and diplomatic self interest, an important trait of well-functioning democracies that the EU’s member states appear to have forgotten.

If Barack Obama thinks that the European Union is such a marvellous thing, he is very welcome to go before the American people and tell them that he wants America to join a political union made up of many divergent countries, where the United States Constitution is no longer supreme, Congress is no longer the sole originator of legislation, the judicial branch is subordinate to international courts and the executive branch (and office of the President) is just one voice among tens of others clamouring to be heard at international summits.

President Obama should then go on to explain why he believes that it would be beneficial for America to join such a political union – one made up primarily of social democratic or socialist governments with political stances far to the left of most Americans – and why America should be forced to adopt many of these truly left wing policies at the expense of their unique entrepreneurialism and economic power.

Tim Montgomerie picks up on this line of argument in his excellent Times column (+) arguing for Brexit:

Few other countries in the world would choose to do what we have done. Talk to an average American and ask if they would agree to open their borders so that every Mexican or Brazilian had a right to live and work in Kansas or Florida. Poll the people of Japan to check if they would be happy for the government of South Korea to decide who fished in their territorial waters. Go to Canberra and inquire if they would be content for judges from Indonesia, the Philippines and New Zealand to decide whether suspected terrorists could be deported from Australia. I’d then advise you to stand back a few paces. Too many decibels are never good for ear drums.

Of course President Obama will do no such thing – it would be instant political suicide for him to  suggest that America voluntarily cripple itself economically and limit its sovereignty in such a draconian way. Therefore, when the president of the United States speaks of his earnest desire for Britain to remain a committed member of just such a political union, we should listen politely and then totally ignore every word that he says.

If the undemocratic, unaccountable and unwanted European Union is not good enough for the United States – and America would sure as hell never join such an organisation – then it certainly isn’t good enough for Britain either. Britain is a great country, one of the few truly indispensable nations of the world, and like all top-tier nations our interests would be far better served if we stood as an independent country on the world stage, not shackled to a mid-century relic from the post-war world order.

Since Obama is apparently so keen to help the European Union usher in the death of the nation state – the basic building block upon which our world is organised – perhaps he would care to explain to Americans (and the rest of us) what should replace it, and how democracy will be maintained when international bodies and trading organisations, not countries, are sovereign.

Regardless, President Obama is free to say whatever he wants as Britain wrestles with the existential decision of whether to stay in the EU or make our own way in the world again. But we should not be so doe-eyed and blindly trusting as to assume that the American president has our best interests at heart when he urges us to remain part of a club which the United States would never join in a million years.

5 thoughts on “If Barack Obama Likes The EU So Much, America Can Take Britain’s Place”