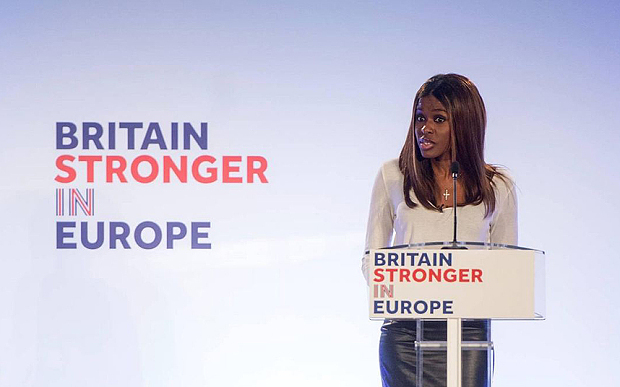 The faded TV presenter’s confused endorsement of Britain Stronger in Europe exposes the tawdry, deceitful tactics of the “In” campaign

For eurosceptics, the shambolic launch of Britain Stronger in Europe is the gift that keeps on giving.

And for those of us who spend our time writing about the EU referendum and the prospect of Brexit, it is nice when the europhiles do our work for us, which is exactly what June Sarpong managed to do in her (no doubt partly ghost-written) column in today’s Telegraph.

Two of the “In” campaign’s most basic tactics are quite simple:

It’s not rocket science and its success relies entirely on the British people being far more fearful and foolish than they are, but it is all the pro-Europeans have, so it is not surprising to see them running with it.

Unfortunately, put these basic weapons in the hands of June Sarpong and she handles them so ineptly that their clumsy and laboured use makes the tawdry strategy behind them pop uncomfortably into focus.

Thus we get this:

I believe that we are all stronger, safer, and better off inside Europe than we would be out on our own.

I know many people feel that Europe isn’t perfect. Well, neither do I. But on balance we get out of our membership far more than we put in.

I also know many people haven’t even started to think about how they will vote: to remain in Europe or leave it.

Europe, Europe, Europe. Not the European Union. Do you get it yet? If Britain votes to leave the EU, we will apparently be levering our islands away from the geographic continent of Europe toward lonely isolation in the mid-Atlantic. Sarpong’s use of “Europe” is so overwrought that it becomes obvious, and helps to render her argument ridiculous without eurosceptics having to lift a finger.

This referendum is about the future of Britain and who we are as a country. Should we be outward looking and part of something bigger than just ourselves? Or a country that shuts itself off and retreats into its shell?

The global power paradigm is seeing a serious shift, and in the next 50 years Europe could see its leadership role in the world reduced. So I do not believe this moment in history is the time for the UK to go it alone.

The question has to be: if not Europe, who would the UK partner with to effectively compete in this new economic landscape?

At some point, it would be nice if the pro-European side would actually engage with the eurosceptic argument rather than simply ignore it. We eurosceptics say that for Britain to remain in thrall to the mid-century anachronism that is the European Union, to fixate solely on trade with the world’s only stagnating region, is a short-sighted instinct based on fear of the world, its threats and opportunities. We say that there are manifold opportunities to trade and pursue our interests with the wider world, without having to do so through the suffocating filter of the EU. And we say that it is naive to persist in believing that the EU is all about trade and cooperation when there is a parliament, a government (the Commission) and common foreign and defence policies in the pipeline.

The very last thing that we eurosceptics are is scared of the world and desperate to shut ourselves off from globalisation. On the contrary, we chafe at the restrictions imposed by Brussels, the fact that Britain does not have a voice at any of the international institutions where all of the international regulation that counts gets made, and the fact that Britain’s future economic prospects are inexorably yoked to the slowest and most backward of the EU’s twenty-seven other member states.

The pro-European lobby can continue tossing around their lazy accusation that eurosceptics are Little Englanders scared of the world, but it won’t stand scrutiny over the long haul of the Brexit referendum. At some point they will have to engage with our point and argue that fearfully remaining in a largely-unreformed EU is better than pursuing bilateral trade and cooperation deals with other countries. At the present, it’s not just that prominent pro-Europeans are holding back on making this argument. They don’t even have an argument ready to go. Because they are wrong.

But she’s not done. June Sarpong also has time to do some lobbying for the US State Department:

President Obama and his administration have been pretty clear that the US values “a strong UK in a strong European Union”, so I don’t think we could assume our ‘special relationship’ would continue in the same way, if we left.

I have explained before in detail the many reasons why President Obama needs to butt out of a strictly internal decision for the United Kingdom. But suffice it to say that while Britain sacrificing our long-term prosperity in order to stop the EU drifting too far into social democratic oblivion may very well be in the best interests of the United States, we have a duty to act in our own national interest.

The Special Relationship with the United States is rooted in our cultures, fleshed out by commerce and tested in the fires of war. If it does not survive British secession from a failing political union then it was never there to begin with.

Finally, Sarpong ends her column with this clanger:

Since our launch in East London last week, I’ve been struggling to put my finger on exactly what made me agree to join this campaign.

Yes. Despite joining the board of Britain Stronger in Europe and appearing at their high profile launch event, one of their main celebrity spokespeople spent the past week scratching her head and wondering why she signed up for the gig in the first place.

People make mistakes. And pretty much everyone who goes on record from now until the result of the referendum is announced some time in 2016-2017 will misspeak at some point. I will doubtless say some things I regret between now and then. But I stand behind the things I believe in enough that I don’t start doubting myself the moment I speak. That’s not to say that all my beliefs are fixed and impermeable, but I also don’t take to the pages of the Telegraph to muse about whether I really believe in them at all.

June Sarpong has been a disaster for the “Out” campaign so far. May there be many, many more just like her.

5 thoughts on “For Eurosceptics, June Sarpong Is The Gift That Keeps On Giving”