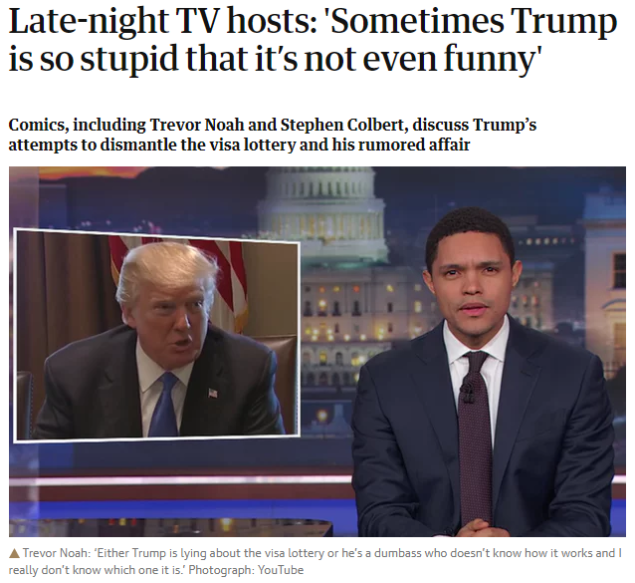 As late night TV hosts double down on their anti-conservative themes, opportunities for Left and Right to come together away from politics continue to dwindle, to everyone’s cost

Following Jimmy Kimmel’s recent pronouncement that nearly all talk show hosts are left-wing because only progressives have the required intellect to read jokes into a television camera, I wrote a bit of a meditation on why extending the politicising of everything to the realm of late night TV can only be a bad thing for society.

As amusing as I find the likes of Stephen Colbert and Bill Maher – and at their best, they are searingly funny – one cannot complain about division in society while simultaneously pitching late night talk shows to only half of the country. Even if it makes short-term business sense to drive up ratings by pandering to a particular partisan demographic, it comes at the cost of strengthening the bubble effect and ensuring that the left-wing comedians and their cheering audiences continue to be perplexed and outraged by the concerns, priorities and actions of whole other demographic groups they never bothered to understand.

Joseph Epstein picks up the same thread in the Wall Street Journal today, lamenting the way that late night comedy has jettisoned nonpartisan humour in favour of preachy, hectoring progressivism:

In a political time as divisive as ours, a public figure loses roughly half his following—and hence his charm—just as soon as he announces his politics. For an entertainer to do so is perhaps even more hazardous.

That the late-night talk-show hosts are ready to give up a large share of the audience to indulge their politics is something new in American comedy. Whatever Jack Benny, the Marx Brothers, Milton Berle, Joan Rivers or Johnny Carson might have thought about what was happening in Washington, they wisely kept it to themselves. When Charlie Chaplin was revealed as a Communist fellow-traveler in the late 1930s it hurt his reputation, though he never allowed his politics directly to influence his art. On the other side, when Bob Hope found himself, because of his support for the Vietnam War, aligned with Richard Nixon, many of his most steadfast fans deserted him. The lesson, one should have thought, is that comedy and politics don’t mix.

It is worth remembering just how recent a phenomenon this really is. Jay Leno, the former king of late night (whom I found tremendously unfunny) personally skewed to the right but refrained from turning The Tonight Show into After Hours at the Heritage Foundation in favour of a gentler, undiscriminating mockery. And as I wrote the other day, even Jon Stewart managed to excoriate the Bush administration for its manifold failings without coming across as dismissive or hostile towards those who may have voted for George W. Bush. The Daily Show always had a leftward tilt, but there was still some entertainment value for conservatives; it is hard to imagine a Trump voter watching Stephen Colbert, Jimmy Kimmel or Bill Maher with any enjoyment.

And yet this approach is clearly good business, because turning on the television in primetime is increasingly like watching Saul Alinsky’s Rules for Radicals made flesh, night after night. Meanwhile, advertisers exercise their prerogative to stop their ads from being shown during the shows of right-wing opinion journalists on cable news, but are only too happy to have their brands associated with comedians who speak exclusively to one half of the country. Again, that is their right, the free market in action, but that only brings me back to my original point – that society is in a pretty wretched state when half the country is fair game for comedians and written off by large corporations while the other half  is pandered to by both.

Epstein goes on to make the same point:

Enough people must share the views of these hosts to keep the careers of Maher, Colbert, Kimmel & Co. afloat, which is to say to keep their ratings high enough to be commercially viable. Yet these insufficiently funny comedians, with their crude political humor, do little more than add to the sad divisiveness that is rending the country. Something, surely, has been lost if one can no longer turn to comedy as a relief from the general woes of life and the greater farce that has for some years now been playing out in our everyday politics.

We have seen what can happen when key institutions of society tilt too far one way or the other, and the destructive knock-on effects which are sometimes unleashed as a consequence. The persistent soft-left bias of the mainstream media was instrumental in driving the success of conservative talk radio in the 1990s, and then right-wing online outlets such as the Drudge Report. The free market in action, yes, but also an encouragement for the political right to decamp into a self-contained ideological bubble of their own, a swamp where exaggerations and conspiracy theories festered, leading first to obstructionist Tea Party representatives and ultimately to Donald Trump himself.

And as conservatives departed the mainstream for their new niche market refuges, so the ideological balance of those who remained tilted ever further to the left, spurring the creation of an equal and opposite left-wing bubble in what was once the unbiased mainstream space, now replete with its own insatiable demands for bias confirming facts and narratives.

Obviously this pattern is far more troubling as it pertains to the media than the relatively trivial world of late night television, but still the latter it is yet more evidence of the same divisive force at work. Where people of all political persuasions could once happily watch Johnny Carson or Jay Leno, now the Left has captured virtually the entirety of  mainstream television programming, with younger web-savvy conservatives seeking equally politicised conservative-skewed comedy such as Steven Crowder‘s growing media empire (his show is also very good).

Individually there is nothing wrong with any of these shows; it is not as though Stephen Colbert represents an existential threat to the fabric of American society. The problem is that the cumulative effect of this divisiveness, this self-segregation generally initiated by the Left and eventually responded to by the Right, is that over time there are fewer and fewer meeting grounds where people of all political stripes can gather as Americans (or Brits, for we have the same problem here) first and foremost. Our national town square is shrinking, and at a time when we most need to reach within ourselves to find empathy for those with different political views, instead we retreat into mockery and incomprehension.

I wonder if those late night TV talk show hosts whose careers are presently flourishing under Donald Trump will ever come to realise that they, too, are catalysts in this destructive Trumpian reaction?

Lately, this blog has been focusing on the younger, millennial generation and our unfortunate propensity to think as scared consumers rather than engaged citizens, and so overwhelmingly support Britain remaining in the European Union (even if many of us are too lazy to carry our opinions as far as the ballot box).

In taking this stance, I have encountered some pushback from readers, who have (rightly) pointed to the fact that older generations can be equally greedy and self-interested, but (wrongly) drawn a false equivalence between the two.

While not all young Remainers hold their position because of perceived material self-interest, those who completely ignore the democratic question to focus exclusively on their own material (typically career and travel) prospects – which would almost certainly be completely unaffected in the event of Brexit – are fully deserving of the criticism levelled at them by this blog and others.

The Guardian breaks down the latest polling data:

Government strategists and pollsters privately admit that the central problem for the Remain side is that its support for staying in the EU is strongest among young people, the group least likely to vote. Opinium found that in the 18-34 age group, 53% said they backed staying in, against 29% who wanted to leave. But only just over half (52%) in this age group said they were certain to actually go out and vote.

Among voters in the 55-and-over category, support for leaving was far stronger, as was their certainty to vote, offering a huge advantage to the Leave side.

Some 54% of voters aged 55 and over said they wanted to leave against 30% who wanted the UK to remain in the EU. But in stark contrast to younger voters, 81% of this group were certain to vote.

Perhaps our generation is in need of a wake-up call. This particular tirade (quoted below) is addressed to American millennials flirting with the presidential candidacy of Bernie Sanders, but parts of it apply equally to younger British voters indignant that the Leave campaign’s quest to restore democracy is interfering with their perceived career options springing from the munificent European Union.

Adulthood isn’t what we thought it would be. No, the economy these past several years hasn’t exactly been stellar, either. Okay? Okay.

My fellow millennials, for sure we have our challenges. Many of you were raised in broken homes. Many of you were exposed to divorce. It’s possible a lot of you didn’t live with your father or may not have known him at all. Combine home life with the rise of political correctness in school, taking its dangerous form of “self-esteem above all,” and no wonder you think life is unfair but you should have it all.

Because guess what, my friends? You’re abject loyalty to socialism is going to tank our country. Your insistence on getting what you want and making other people pay for it, all under the guise of “fairness,” will lead to ruin. For everyone. Including you.

Switch out “socialism” and “government” and replace it with “the EU” and you have a perfect response to the EU’s millennial cheerleaders.

Yes, of course this is an age of anxiety. Just as the boomer generation seriously worried about imminent nuclear annihilation, so we worry about job security and career prospects. But we are hardly a uniquely benighted generation, though there are indeed many ways which our politics currently favours older voters – the government’s lack of a coherent housing policy being an obvious example.

But I’m sorry: growing up in economically uncertain times in an age where there is no guaranteed job for life does not absolve millennials – my generation – from thinking not only as self-interested consumers but also as engaged citizens who care about the country and democracy that they will bequeath to their own descendants.

The generation who spent their prime years fighting fascism – and who saw their contemporary Britain largely reduced to rubble and ruin in the process – could have abstained en masse from fighting the Nazi threat in order to buy a few more years of economic security and job stability through appeasement. But they were willing to go to war and risk what they had for principles which transcended material concerns.

By contrast, our generation is not called to risk or sacrifice nearly as much as our grandparents and great grandparents were to defend democracy and national self-determination – and in fact could have much to gain from British secession from the European Union, materially and otherwise. But by an overwhelming majority we are unwilling to take even that far smaller risk.

And history will long note this colossal failure of courage and character from Generation Me Me Me.