This blog has been (justifiably) quite hard on Ariane Sherine, the Spectator’s latest affirmative action hire, expressing exasperation with her wide-eyed surprise that Ukippers and pro-Brexit folks don’t immediately lynch every single Asian person they come across and suggesting (ahem) that she represents everything that is wrong with the closed shop of Westminster political journalism.

But credit where credit is due – her latest piece in The Spectator identifies a real and insidious issue, and Sherine even manages to come down on the right side of it.

That issue: the censorship and rewriting of beloved children’s literature to make the texts conform to with the current dogma that young people must not be exposed to old-fashioned turns of phrase, ideas or even names which jar with today’s coddling, infantilising and achingly PC culture.

Six years ago, the publishers Hachette took the well-meaning yet preposterous step of making ‘sensitive text revisions’ to Enid Blyton’s classic Famous Five books. So ‘tinker’ was changed to ‘traveller’, ‘mother and father’ to ‘mum and dad’ and ‘awful swotter’ to ‘bookworm’. The suggestion that tomboy George needed ‘a good spanking’ became ‘a good talking to’, while girly Anne’s assertion, ‘You see, I do like pretty frocks — and I love my dolls — and you can’t do that if you’re a boy’ had its final clause removed, rendering the sentence throwaway rather than poignant. Unsurprisingly, given that all the charm had been stripped out of them, the revised editions flopped, and last weekend it was reported that Hachette were reverting to the originals. The publishers conceded that the updates had proved ‘very unpopular’.

But Hachette isn’t the only culprit. Earli­­­er this year, I bought my five-year-old daughter one of the Blyton titles I had enjoyed most as a child, The Magic Faraway Tree. I read it aloud to her, expecting to feel warmly nostalgic, but I merely felt baffled and irritated to discover that the publishers, Egmont, had also made several unnecessary changes. The names Fanny and Dick had been changed to Frannie and Rick. At first, I thought this was a misguided effort to avoid schoolchildren giggling at unintentional innuendo, but then I found that the names Jo and Bessie had also been pointlessly updated to Joe and Beth.

Joe and Beth? It wasn’t enough for Hachette to butcher beloved Enid Blyton characters, they really had to turn them into preening, insufferable hipsters too? No, this is too much.

Decisions to amend old, politically incorrect texts are based on a myth: that children are malleable, delicate creatures. Let’s eradicate anything remotely contentious! But anyone with a child over five knows that to edit the past is to insult both their intelligence and their resilience. My little girl is astute, tough and robust, and gleefully recounts gruesome fairy tales she has heard from friends. A colleague’s young sons delight in reading Old Testament stories of massacres and murders in their 1960s version of the Bible. These parables won’t turn our children into serial killers, and nor will Blyton’s unreconstructed slant on the world adversely influence their characters. I spent ages five to 12 engrossed in Blyton’s novels, and am yet to be branded sexist, racist or classist.

She’s lucky; I myself have been accused of the holy trifecta (sexism, racism and classism) despite being a mixed race person from pretty humble socio-economic background, primarily because I fail to spout the “correct” progressive left wing opinions on social justice, affirmative action and redistribution – but I don’t hold my avid readership of The Five Find-Outers to blame.

But Sherine is absolutely right, children are resilient creatures. In fact, children are the the epitome of anti-fragility – that precious quality of actually becoming stronger and more durable the more they are challenged and stretched in their thinking. And yet we seem determined to beat this precious quality out of our young people today, and we do so with such zeal that by the time they leave school for university many young adults are quivering wrecks, convinced that any exposure to conflicting ideas or any feedback less than warmly affirming will somehow gravely injure them and even “invalidate” their carefully-constructed “identities”.

In fact, older books’ anachronisms can prompt useful conversations about changing attitudes towards race, sex, sexuality and class. The comedy writer Nathaniel Tapley recently encouraged his young son Thomas to read the 1967 children’s book Lion Adventure by Willard Price, remembering the boys’ adventure series as being rip-roaring fun. When his son asked: ‘Daddy, what does, “This is black man’s country’ mean?”’ they went on to discuss how differently people think about race these days, and whether or not people should live together.

[..] Children should not be patronised or mollycoddled — they should be free to read all about the amusingly quaint ideas, thoughts, words and names from the olden days, however sexist, unpalatable or wrong these may be considered now. They can learn from the past — but only if it remains uncensored.

This is a really important point. I was born in 1982, and some of the things I read in Enid Blyton books seemed strange or jarring to modern sensibilities even then. Did this in any way detract from my enjoyment of the books? No. Did it cause me to absorb the 1940s attitudes toward race and gender contained within? No. Did it prompt a conversation or two with my mother about why things were different, or why characters talked a certain way? Probably, yes. And from those discussions I learned and grew, as will young children today if they are given the chance to read the unadulterated, uncensored Enid Blyton.

This doesn’t just apply to children’s literature, of course. In 2011, a pinch-faced, hectoring Social Justice edition of Huckleberry Finn was released, in which the racist term “nigger” was replaced with the more emollient “slave”. This in turn was in response to numerous schools dropping the American classic from their curriculum because the PC zealots in charge preferred to pander to the imagined fragility of their students rather than read and teach through the awkwardness to understand the time and context in which the book was written.

But whether it is adult literature or beloved children’s classics, publishers have no business vandalising and defacing important artefacts from human civilisation just because they fail to live up to the tremulous, wobbly-lipped standards of the Permanently Offended.

Ariane Sherine is right to be outraged at the censorship of Enid Blyton. We should all be outraged. Because as with everything else connected with social justice, the progressive censors are not really signalling their low approval of these long-dead authors. No, what they are actually doing is signalling their disapproval of us. They are saying that we either are too pathetic and delicate to understand these social and literary anachronisms, or that we simply cannot be trusted to hear racist, sexist or homophobic dialogue in the context of great or beloved works of literature, lest the lumpen masses seek to recreate the 1950s (or the 1850s) in today’s world.

In other words, the progressive censors believe that you are either a perpetual victim or a would-be future racist, sexist or thought criminal. And if there is any ugly sentiment which should be purged from the world, the progressive metro-left’s sneering contempt for ordinary people would rank very high indeed on the list. 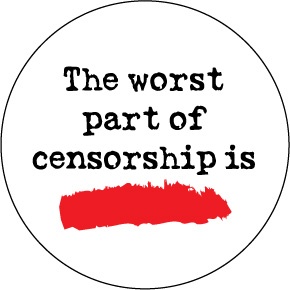