Labour’s loose cannon Shadow Chancellor is behaving like an economically illiterate, childish simpleton with no clue how to oppose effectively, let alone one day govern the country

The past month has not been pretty for those of us who hoped that Jeremy Corbyn’s election as leader of the Labour Party might help usher in the return of serious ideological debate to British politics.

Jeremy Corbyn has scored just one significant victory so far: his first outing at Prime Minister’s Questions, where the opposition leader’s measured tone and clever decision to raise questions submitted by the general public succeeded in changing the tone of the session – and for the better.

But that one bright spot aside, it has been utterly miserable – unforced error following self-inflicted wound, compounded by acts of astonishing political naivety. On the rare days when the newspaper front pages have not carried stories about Labour Party splits and internal warfare, the newly energised Hard Left supporters have stolen the show with their venomous spitting, their rape threats and their incessant chants of “Tory Scum!”

And now Labour’s Shadow Chancellor, John McDonnell, has succeeded in undoing the parliamentary party’s only truly coherent and sensible position, for reasons which seem to change by the hour. In his infinite wisdom, John McDonnell decided to reverse Labour’s policy of following the Fiscal Charter – the commitment set by George Osborne to run a budget surplus during normal economic times – having announced it only two weeks ago at Labour Party conference.

Thus, in the space of two weeks, Labour have gone from saying this:

“We accept that we are going to have to live within our means and we always will do – full stop. We are not deficit deniers. We will support the charter.”

“We will underline our position as an anti-austerity party by voting against the charter on Wednesday.”

Because nothing screams “we care about the poor” like running up the national debt (and Britain’s interest repayments) even further, even in good years with plenty of economic growth and swelling tax receipts.

Of course, this instantly dynamites whatever economic credibility Jeremy Corbyn’s party was hoping to build – even high spending socialist governments can’t go on adding to the national debt forever. But that’s not the real problem. The real problem is the reason which the Shadow Chancellor is currently giving for his abrupt U-turn.

To be fair, the Labour Party came up with a variety of reasons for their political ineptitude as they scrambled to manage the fallout from this latest self-inflicted injury. They started by claiming that McDonnell’s U-turn was necessary because the world’s economic prospects had tanked so much in the space of two weeks that it was now imperative that Labour commit to ever-higher levels of government spending, forever. But when that excuse inevitably didn’t wash, they came up with something even worse.

John McDonnell, the shadow chancellor, has explained that he changed his mind about voting for the government’s fiscal responsibility charter after meeting the tearful families of Redcar steelworkers who have lost their jobs.

[..] Speaking to broadcasters, McDonnell said: “I have changed my mind on the parliamentary tactics. Originally what I said to people was: ‘Look, that charter is a political stunt, it’s a political trap by George Osborne, it is virtually meaningless – he ignores it himself time and time again, he never meets his targets. So [I said], this is just a stunt and let’s ridicule it in the debate and vote for it because it’s a meaningless vote.

“I went to Redcar and I met the steelworkers and I had families in tears about what’s happening to them as a result of the government failing to act, failing to intervene. And I came back and I realised the consequences of the government’s failure to invest in infrastructure and skills, the cuts that are going to start coming now, I realised that people are actually going to suffer badly. And it brought it home to me, and I don’t want the Labour party associated with this policy.”

Yes. The Shadow Chancellor changed his mind about a key economic policy position because he met with some people who lost their jobs and noticed that they were upset.

I don’t know if John McDonnell thought that this would make him sound compassionate and full of empathy. I don’t know because I couldn’t get past the sheer, fatuous stupidity of his statement – the statement of a man who is actually the Shadow Chancellor. Of the United Kingdom.

It shouldn’t be necessary to rebut this, but suffice it to say that a responsible government should not – absolutely must not – base their macro level policy decisions on one man’s emotional reaction to meeting one narrowly defined group of people for a vanishingly short period of time. And yet this is exactly what John McDonnell openly, proudly admits that he has done.

Those two weeks where Labour were insisting that fiscal responsibility was the name of the game, and that if ever there was a time to operate a budget surplus and pay down the national debt, it would be when the economy is doing well? Well forget all that. Forget the fiscal charter. The Shadow Chancellor met with some shell-shocked families who just found out that their local steel plant is closing, their plight tugged at his compassionate heartstrings, and now he is in favour of big budget deficits all the time, in good times and bad. Budget deficit heri, budget deficit hodie, budget deficit semper. After meeting with one group of people.

Never mind Britain’s official opposition striving to conduct themselves so as to offer a credible alternative to the incumbent government. This decision-making process – reversing official party policy based on one meeting, and happily throwing the nation’s finances under the bus in order to make an empty gesture of solidarity to people who will not benefit anyway – would be worrying in an older child. It’s all emotion, moral posturing and empty virtue-signalling. No substance.

And when you go before the national media and announce that you have unilaterally reversed the most fundamental building block of Labour’s new economic policy as the party seeks to recover from a devastating election loss – and have done so based on one solitary meeting, because talking with some newly unemployed people made you feel a bit weepy – you deserve to be roundly ridiculed. Hell, you don’t even deserve the attention of the national media in the first place.

Woe betide the Labour Party if the nickname “Ronald McDonnell” – coined by a furious Dan Hodges – gains any traction:

John McDonnell is a fan of straight talking, honest politics. So he’ll appreciate the following observation. John McDonnell is a useless, incompetent, joke of a politician who should not be given responsibility for making the tea in his local constituency office, let alone hold the office of shadow chancellor of the United Kingdom.

And it is hard to disagree with Dan Hodges’ despairing assessment of McDonnell’s performance as Shadow Chancellor:

Many people feared John McDonnell might prove to be a dangerous adversary for Labour’s moderate elements. That he was the brains of the Corbyn operation. And he may well be the brains of that operation. But as we now know – and apologies for again resorting to straight talking, honest language – the man is a moron. How does a sentient human being stand up and say the words: “He has brought forward his grandiose fiscal charter not as serious policy making but as a political stunt. A trap for us to fall into”, and then proceed to hurl himself into the very trap he has just identified?

What’s more, does John McDonnell actually believe other sentient people will fall for his own specious argument that the global economic situation has changed so fundamentally in the space of a fortnight that it necessitates the complete reversal of Labour’s entire macro-economic strategy?

(Labour were still using their risible “the world economy fundamentally changed over the course of two weeks” excuse for McDonnell’s U-turn when Dan’s article went to press).

I wanted Jeremy Corbyn’s election as Labour leader to bring about a period of greater ideological choice, and more vigorous debate, in British politics. I still believe that was an eminently worthy and plausible aspiration. But it is rapidly becoming clear that the Corbyn era may deliver no such thing, for two reasons. Firstly, because almost everything the party does is being drowned out by the hate-filled, moralising, “Tory Scum” shouting activist base. And secondly, because on the few occasions when Labour do manage to command the spotlight, they inevitably fluff their lines and fall off the stage.

There has (in my view) always been a childlike simplicity to a large strand of left-wing thought. But until recently – up to the late Miliband years at least – the Labour Party still just about practised grown-up politics. But clearly that time is over. Under Jeremy Corbyn, the Labour Party seem determined to match the childlike naivety of some of their policies with a defiantly infantile approach to conducting politics itself.

Technically, it is still early days. Jeremy Corbyn may yet steady the ship with a second successful shot at Prime Minister’s Questions on Wednesday. But with self-inflicted gunshot wounds like this, hopes for Labour’s immediate future – and the wide-ranging political debate Britain sorely needs – are fading fast. 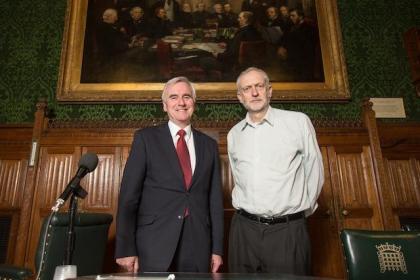 2 thoughts on “Labour’s Economic Policy: The Slow-Motion Car Crash You Can’t Not Watch”