The time has come to institute an annual British Thanksgiving holiday

Take a trip to your friendly local Asda superstore in the next day or so and you will be treated to back-to-back in-store announcements about their upcoming Black Friday sale. “Get ready for Black Friday!” chirps the voiceover, as a cheerful, disembodied man tempts you with sweet promises about this magical event of a retail experience. Yes, Black Friday is coming to Britain.

This is as strong a contender for Tasteless Corporate Act of the Year (Large Retailer category) as we are likely to witness this side of Christmas. Asda, owned by Wal-Mart, has successfully imported the grubby, commercially lucrative, post-coital rump of a cherished American national holiday – Thanksgiving – while neatly skipping over all the pesky fundamentals that give it meaning in the first place: you know, those interminably dull things such as love, family, gratitude and patriotism, tiresome distractions that will never generate a good Return On Investment.

Earlier this year, I took part in a TV debate on London Live, arguing that we should absolutely not make the festivals of Eid and Diwali UK public holidays, for fear of muddying the cloudy waters between religion and state yet further:

I was outnumbered, but I made the case as strongly as I could that what Britain desperately needs is a public holiday that can bring us all together as one people – not another cynical, politically correct nod to multiculturalism.

The possibilities for such a unifying British public holiday are endless – after all, what other country has as rich a history on which to draw when trying to choose a new national holiday? I suggested a few potential examples at the time of the debate, but my list is by no means exhaustive. Britain has achieved so many military, scientific, cultural and social victories that continue set us apart as a truly exceptional, indispensable nation, the only difficulty would be narrowing the crowded field to a single expression of who we are and what we have accomplished.

But this year, perhaps more than ever, we need a British Thanksgiving holiday. Despite Britain’s economic recovery, many of us continue to live in the long, cold shadow of the great recession, with squeezed, stagnant or non-existent wages spread too thinly to pay for the basics and comforts of life. As our mainstream political parties scrap over the elusive centre ground and ideologically merge with one another, the British people themselves are becoming increasingly polarised and less able to empathise with or respect those with differing political views. There is a steady trickle of young, disaffected British Muslims who feel so little allegiance to their mother country that they are stealing away to Syria to pose with guns, play soldier and fight for ISIS. And it was less than three months ago that our United Kingdom nearly tore itself apart for good, as Scotland came unnervingly close to voting to secede from the union.

Whatever the improving economic indicators say, all is not well in today’s Britain. Whether you are indignant about ongoing austerity or mad as hell about uncontrolled immigration and its effect on the labour market, chances are that you believe Britain is on the wrong path, and are probably also sceptical that things will significantly improve in the near future. Now, of course giving Britain’s hard workers another statutory day off every year won’t make all of these problems go away. But if we picked the right day, selected the right cause or event to commemorate our shared British civic heritage, it might just shore up the foundations a little bit and help us to ride out the storm together.

Americans continue to faithfully observe their national Thanksgiving holiday in good times and bad, showing the world that it doesn’t necessarily require a fat wallet to get together with loved ones and be grateful for what we have. But perhaps we British need an extra reminder of this fact – we tend to obsess a lot more than our American cousins about what we should be getting from the government, be it benefits or public services, and are consequently more likely to feel continually aggrieved and bitter at the inevitable shortfall. Maybe it would do us all good if we had imposed on us a day where we were strongly encouraged to think about our blessings, and the difference that we – not government – can make in the lives of our fellow citizens.

For the sceptics out there, there is ample precedent for starting a new holiday – Canada has also long observed a day of thanksgiving, though its present position in the calendar was not fixed until 1957. American expressions of thanksgiving were also sporadic and uncoordinated until President Abraham Lincoln fixed the date as the final Thursday in November, while the Civil War still raged. These timings proved wise – contemporary Thanksgiving in North America acts as a bulwark against the encroachment of Christmas, and stores only get into the swing of Christmas once the Black Friday sales are over, a state of affairs which would be very welcome here.

Wouldn’t a British Thanksgiving be the perfect antidote to the incessant commercialisation and forward creep of Christmas, the decorations raised in late September, supermarket mince pies that expire in November, discordant Christmas songs blasting out from every shopfront and the inevitable, vapid re-release of “Feed The World”?

After a long, hard recession, a bruising recovery and a year in which the idea of what it means to be British has become increasingly muddled and uncertain, let’s humble ourselves and dare to take a lesson from our former colony. Let us find inspiration in our storied history, our unsurpassably rich culture and also from within our own hearts. Let us find that elusive common thread of Britishness that should unite us all, transcending race and religion and politics, and cling to that thread in these difficult times.

And even though gratitude does not always come easily and the words may sometimes stick in our throats, let us remember to give thanks for one another, and for our United Kingdom, the guarantor and protector of all that we have. 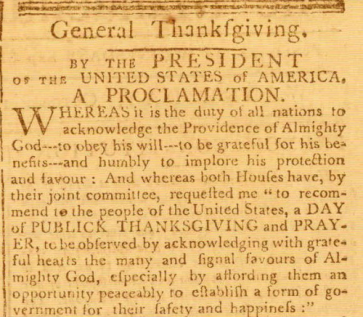 3 thoughts on “After Another Hard Year, We Need A British Thanksgiving Holiday”