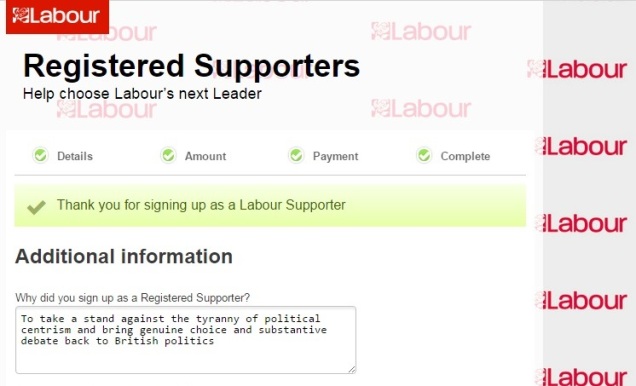 First published at Conservatives for Liberty

Today, I took the plunge. I got out my debit card, opened my laptop, held my nose as I navigated to the Labour Party website – and then paid £3 to become an official Labour supporter, solely in order to advance the leadership candidacy of the MP for Islington North, Jeremy Corbyn.

No, I haven’t taken leave of my senses, and no, I haven’t had a miraculous conversion and become a Born Again Socialist – far from it. My earnest desire remains the same: to see British politics move in a far more libertarian, pro-individual freedom direction.

But I have come to the reluctant conclusion that the Conservative Party currently has no intention of governing in the pursuit of smaller government and a strong nation state, and that therefore the best way of advancing the cause I believe in is to act externally to force the Conservative Party to sharply change direction.

I stumped up my £3 not out of any desire to “consign Labour to electoral oblivion“, like the Telegraph’s Toby Young, or to cause low-level mischief of any kind at all. I vehemently disagree with most Labour Party policy, but the vast majority of members are good people and I bear them and their party no particular ill will. I have always wanted to see conservatism win, not see socialism lose.

I became a short-term Labour supporter today because I am putting my money where my mouth is, and seeking to reward success, steadfastness and political courage. And when it comes to steadfastness at least, Jeremy Corbyn has more of this quality in his little finger than the Conservative Party leadership possess in their entire bodies.

Does this mean I have suddenly realised the awesome benefits of Big Government and state socialism? Of course not. It just means that in an age of political centrism, where being of no fixed belief or ideology has come to be recognised as a perverse badge of honour, Jeremy Corbyn actually holds true to his beliefs, seeking to convince and lead rather than flatter and follow.

I don’t happen to like the product that Jeremy Corbyn is selling – I find a large, interventionist state deadly to individual liberty, not to mention morally corrosive – but I do very much like the fact that Corbyn does not try to be all things to all people, and does not equivocate and apologise for his beliefs in the way that David Cameron and George Osborne do. And it is my hope that by facilitating the rise of a Labour Party leader who actually believes in something, it may spark a similar renaissance of ideas within the Conservative Party.

And be under no illusion, British conservatism is undergoing a massive crisis of confidence in these heady, post election victory days. For every step forward under the Cameron premiership – such as education and welfare reform – there have been at least two steps back. Cameron and Osborne fought the 2015 general election campaign as guardians of fiscal responsibility when they are nothing of the kind. They talk about freedom but clamp down on civil liberties and free speech. They rightly emphasise the importance of a strong economy, but only so that it can fund Britain’s insatiable public services.

David Cameron managed to win the most uninspiring general election campaign in living memory only because people took one look at the idiot Miliband brother leading the Opposition, and rightly decided that the devil they knew was far preferable to the devil who can’t insert a bacon sandwich into his mouth without coming a cropper.

Is this good enough for British conservatism? Are we content to be Britain’s government of last resort, the party given default permission to keep a steady hand on the tiller of government when the others are too crazy to be trusted? Well apparently the Conservative Party leadership is perfectly content for this to be so. Winning by default, on an ever-shrinking share of the national vote, is apparently fine in the eyes of the Prime Minister and his anointed successor.

But I say no. I, for one, am tired of being continually let down by a Conservative Party which ignores its libertarian wing at best, and treats them with outright hostility at worst. I, for one, would like to be inspired in the way that Jeremy Corbyn – hardly the most charismatic person in British politics – manages to draw and inspire crowds to his campaign rallies.

How am I supposed to motivate myself to care, to pound the pavements campaigning for my local Conservative Party candidate (as I did in 2010) when that candidate and their party leader insist on apologising for the beliefs we supposedly hold dear? What am I supposed to do when, after spending years arguing that minimum wage hikes increase unemployment and make the low paid worse off, the Chancellor of the Exchequer decides to steal Labour’s idea of a national living wage?

So how will my temporarily supporting a rival political party advance the cause of small government conservatism?

Well, my starting point comes from the Hippocratic Oath, primum non nocere – first, do no harm. And at present, we must accept that supporting the Conservative Party is doing more harm than good to the causes of individual liberty and a strong nation state.

For every day that the Conservative Party is in power, conservatives are taking flak for being heartless austerity-peddling monsters on an ideological crusade to shrink the state. This abuse would be one thing if the Tories were actually making real efforts to shrink the state, but they are not – from leaving pensions and senior citizen benefits untouched to keeping VAT at 20% and top income tax at 45%, the idea that the Conservatives are on an ideological crusade of any sort is ludicrous. At present, we are taking the political damage for being ideological zealots without the upshot of enacting real conservative reform.

Some argue that if Jeremy Corbyn were to become Labour leader, the Tories would stake out the centre ground yet further, and British politics as a whole would be dragged to the left. But this is happening anyway – we already know that David Cameron has absolutely no intention of standing up for conservative principles on any matter of substance. Therefore, what reason is there not to seek Corbyn’s advancement in the hope that the presence of an authentic Labour leader who stands up for his beliefs might shame the Conservatives into choosing a similarly principled leader of their own, to replace David Cameron when he waltzes out of office?

It is very hard to anticipate what the next few years will bring in the world of British politics. The rise of UKIP, the SNP’s hegemony in Scotland, the EU referendum, the euro crisis, the migrant crisis – all of these have the potential to shape our politics far more than the machinations of any one personality or faction. All we can really do is put principles before personalities, and seek to reward any effort to bring real political choice back to the debate.

Because know this: when centrism reigns and the cautious politicians of the centre are in charge, it is small government conservatives and libertarians who lose out the most. It is our views – questioning the size of the welfare state, the worship of the NHS, Britain’s membership of the European Union – which are labelled ‘dangerous’ and ‘extremist’.

By supporting Jeremy Corbyn for leader of the Labour Party, I want to widen the field of acceptable political debate in Britain, so that our political conversation might actually be relevant to more of the people living on these islands, and more representative of the full range of their views and opinions. We deserve to have a robust political debate that questions the accepted orthodoxies of our time, and we should have the confidence that our small government conservative beliefs can win the argument.

Like Jeremy Corbyn, I am loyal to my own beliefs first and foremost, before any tribal loyalty to any one political party. And we believers in small government need to realise that the Conservative government of David Cameron and George Osborne is not our friend, that supporting the status quo means that our deeply cherished views will only continue to be bargained away and pushed aside in the depressing scramble for the political centre ground.

And if a £3 donation can help put an end to the constant disappointment served up by this Conservative In Name Only government, I consider it a very small price to pay.

This article was first published at the Conservatives for Liberty blog.

10 thoughts on “Is Jeremy Corbyn The Cure For British Conservatism’s Centrist Virus?”