Jeremy Corbyn’s red-blooded socialist domestic policies are generally flawed and counterproductive, but we can forgive him for that because he represents a legitimate strand of political thought that for too long has been marginalised and shut out of the political conversation in favour of the quisling, centre-left socialism of the likes of Ed Miliband.

What is much harder to forgive, however, are some of Jeremy Corbyn’s stances on foreign policy, where he has frequently espoused views and shared platforms with people of highly questionable character and motive. Whether it’s concerning Northern Ireland, Israel/Palestine or the Iraq war, too often Jeremy Corbyn’s public positions have drifted across the line separating conscientious objection from something much worse.

But now that Jeremy Corbyn is the leader of Her Majesty’s Opposition and burdened with one of the formal offices of state, what chance is there that reason, patriotism and propriety might assert themselves to moderate his well-known public stances?

Too often, the regressive left present themselves as fellow travellers with Islamist extremism and don’t stand up for universal human rights, instead favouring a dogmatic, populist form of identity politics more traditionally associated with the political or theocratic far-right.

I hope Corbyn does not fall into this intellectual laziness. He may disagree with Cameron’s economics and Blair’s foreign policy, but he would do well to learn from their deeper understanding of radicalisation.

I too will be reaching out to the new Labour leader, as I think it is vitally important for the opposition to hold the government to account on progressive counter-extremism, campaign for a clear balance between counter-terrorism and human rights, and ensure our national security without compromising our civil liberties.

Quilliam are usually to be commended for their tough realism in dissecting the issues of extremism and radicalisation, but this statement of faith by Jonathan Russell seems to err on the side of wishful thinking. Jeremy Corbyn has thus far represented a popular strain of left-wing activism which has been too willing to look the other way and forgive serious moral transgressions committed in the name of their favoured causes – a united Ireland, Palestinian statehood, resisting the occupation of Iraq.

This ends-justify-the-means approach is reprehensible enough when coming from an ordinary activist on the street, but coming from the Leader of the Opposition it would be quite unforgivable.

Unfortunately, for all that Jeremy Corbyn’s foreign policy ideas come wrapped in moralising language, there is a remarkable lack of nuance or depth to them. And while Corbyn’s shadow cabinet may dampen some of his worst excesses, it is frankly unreasonable to expect that Corbyn will significantly alter his world view now, at this stage in his life and career.

If we believe those who tell us that foreign policy grievances, rather than the Islamist ideology, is the most significant driving factor for radicalisation then there is now an exciting opportunity to respond, as we have a Labour Party led by a man vocal in his shared opposition to this foreign policy.

And if we believe that stopping violence is the priority, then having Her Majesty’s Opposition being led by a man who has personally adopted these causes and is committed to doing so through democratic institutions, then this is good for counter-extremism.

Of course, if radicalisation is actually more complex than a petulant reaction to foreign policy, and is in fact made more likely by the normalisation of an Islamist worldview that pits Western civilisation with Muslims all across the globe; the prevalence of an ideology that politically exploits Islam to further the interests of several privileged leaders; and widespread identity crisis among young British Muslims due to a lack of integration, then perhaps we won’t see any trends reverse with Corbyn’s ascension to Labour leader.

Of course, the latter is true. Radicalisation is a complex issue, one which cannot be explained away as a reaction to some awful, imperialist British foreign policy. There is indeed a crisis of identity and integration among many young British Muslims – screaming out from the Twitter feeds of those who have since slipped away to join ISIS – which will stubbornly persist, even if Britain were to disband the Armed Forces and become a pacifist country overnight.

And unfortunately, I have seen absolutely no evidence that Jeremy Corbyn gets this. I see no appreciation of the fact that there is serious work to be done around integration, work which can be facilitated by government but ultimately must be done by Muslim communities themselves. Instead of this realism, I see the childishly simplistic view that all the problems of the world are the West’s fault, and that we can appease those who wish to kill us or change the very essence of our country, if only we mend our ways.

Worse still, Corbyn has a disturbing track record of siding not with the moderate voices but rather the most violent and aggressive groups involved in numerous foreign policy areas. And this pattern has repeated itself from Northern Ireland to Iraq, as Alex Massie points out in The Spectator:

Jeremy Corbyn spent much of the 1980s speaking at Troops Out rallies. Given the choice between standing with Irish nationalists in the SDLP or Irish republicans in Sinn Fein and the IRA, Jeremy Corbyn chose the latter path. Perhaps someone will now ask him why. Perhaps they’ll ask him why he’s been happy to ‘honour’ IRA members shot by the British Army but disinclined to shed too many tears for those murdered by the IRA.

Then again, why should Ireland be any different from anywhere else? Corbyn is chairman of the so-called Stop the War coalition (which should really be named Lose the War), an organisation that supported the Iraqi ‘resistance’ in the years after Saddam Hussein was removed from power. If that meant cheering the deaths of British soldiers then so be it. The resistance should use ‘any means necessary’ .

It really isn’t much of an exaggeration to say that with any diplomatic or armed conflict involving Britain, regardless of historical context or circumstance, you could be quite sure to find Jeremy Corbyn cheering loudly against the interests of his own country.

What’s worse, this behaviour is usually wrapped in pious language about the need to “reach out” to those with opposing views and hostile intentions – though as Douglas Murray notes, this willingness to sit down with the enemy only ever seems to extend to one side of the conflict:

Can anyone find any examples of Jeremy Corbyn doing something similar with ‘the other side’ of any of these peace processes or inter-faith meetings? For instance does anyone anywhere have any record of Jeremy Corbyn standing for a minute’s silence for some loyalist thugs killed while on ‘active service’? Or, more plausibly, are there any records of Jeremy Corbyn attending memorial events for the many members of the Royal Ulster Constabulary killed by while doing their duty as policemen? Or are there any records of him remembering members of the British armed forces and security services killed while performing their duties? It is only if we cannot find evidence of Jeremy attending such events that people might read reasons into why we only have records of him attending memorials for the IRA.

I have refrained from writing about Jeremy Corbyn’s foreign policy positions and campaigning activities thus far, primarly due to a cold and brutal calculus that since he will never be Prime Minister his dodgy friends and concerning views are in no danger of being advanced, and that advancing the cause of increased ideological choice in the British domestic policy sphere unfortunately required supporting the Labour leadership candidate whose foreign policy positions are most antithetical to my own.

I still believe this was the right decision. To have high-handedly dismissed Corbyn because he seems more sympathetic to dead IRA terrorists than killed and maimed British soldiers, appalling though it is, would have essentially meant dooming British domestic politics to its previous, centrist course. And Jeremy Corbyn represents the best opportunity in years to reverse the soul-sapping centrism whose tired policies also take a toll – albeit less dramatically – measured in human lives and wasted potential.

But now that Jeremy Corbyn is leader of the Labour Party, those of us on the political Right who supported his candidacy – either out of principle or simple mischief making – have a particular duty to expose and resist the ideologically blinkered, anti-British strain of left-wingery that he sadly represents. We who wanted Jeremy Corbyn to reinvigorate the domestic political debate must be at the vanguard of ensuring that his foreign policy ideas do not gain traction.

For all that Jeremy Corbyn has done to breathe life into a stale political scene, his foreign policy positions are indefensible and often dangerous. Where there should be simplicity – like abhorring the murder of British soldiers by terrorists – Corbyn sees great moral complexity. And where there is genuine complexity – like tackling extremism and radicalisation in modern Britain – Corbyn sees simple solutions which demand nothing of those most likely to forsake their British freedoms and take up arms against us.

Can Jeremy Corbyn reform his controversial and often dangerous foreign policy positions? Almost certainly not. Which is why we must make sure that they are never enacted. 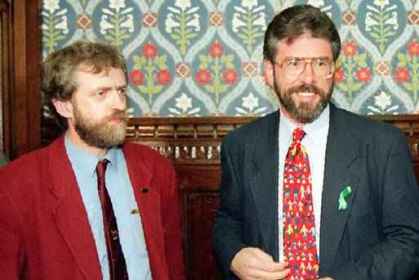 2 thoughts on “Can Jeremy Corbyn Redeem Himself On Tackling Extremism?”