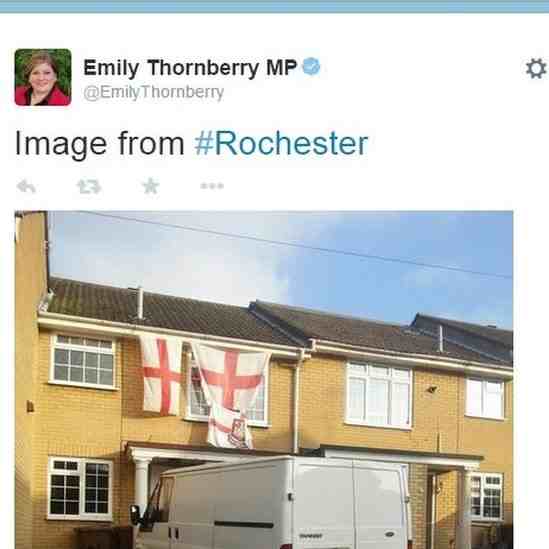 Three words and a picture.

That’s all it took to bring Labour MP Emily Thornberry‘s front bench career as Shadow Attorney General to an end, after being tried and found guilty in the High Court of Social Media of the crime of… taking a picture of a house, and posting it on Twitter whilst out campaigning in Rochester and Strood on the day of the by-election.

Emily Thornberry has resigned from the shadow Cabinet for sending a Tweet that appeared to mock a Rochester voter who was flying several St George’s Cross from their window and had a white van parked outside. Thornberry’s resignation follows Miliband aides briefing that the leader was the angriest they’d ever seen him after being told about the tweet. All this shows just how sensitive Labour is to the charge that it is now a party run by a metropolitan elite who have little connection with the party’s traditional working class base.

Let’s step back. The tweet “appeared to mock” the Rochester and Strood resident? Only someone with the psychic ability to read Emily Thornberry’s mind could know whether she intended to mock him or not. A picture of a house and vehicle cannot by themselves constitute mockery, and the terse caption “Image from Rochester” is equally inscrutable. Anyone other than Emily Thornberry claiming to possess full knowledge of the spirit in which the picture was taken and posted is vastly overestimating their journalistic, political or clairvoyance skills.

It should also be noted in mitigation that Thornberry has a habit of taking mundane pictures while out on the campaign trail, including this one in 2012, very similar to the post which so suddenly brought Ed Miliband’s wrath crashing down upon her:

Note the prominent display of England flags, and the fact that Thornberry enthused about what a “great house” it was. What changed in the space of two years that two such similar pictures can be interpreted so differently?

You don’t have to like Emily Thornberry to be concerned at the way she was tried and convicted of thought crime on social media. This blog has no great regard for Thornberry at all – her appearances on the BBC’s Daily Politics show can be a tour de force of smug condescension, and she has a unique gift for being ingratiating and insulting at the same time. But those are not reasons in themselves to destroy or set back someone’s political career. As with the rest of today’s Labour politicians, Emily Thornberry should be judged by the paucity of her ideas, not excommunicated from public life because she inadvertently tapped into a strong current of resentment against the Labour Party.

As for us, we have to decide if we really want to live in a country of Sudden Death Politics, where straying one iota from the approved script spells the political death knell for a politician. Our current leaders certainly seem to think that we do – they fall over themselves to highlight the verbal gaffes  and missteps of the other side, and hold them up as evidence of their heinous guilt. But we are also at fault for being so easily taken in – we cannot simultaneously complain that all politicians are blandly identical, and also allow ourselves to be whipped into a frenzied outrage by the opposing parties’ cynical spin machines on the rare occasions when they go off-message.

The downfall of Emily Thornberry is only the most recent example of this depressing trend. At this year’s Conservative Party conference Lord Freud was recorded by a Labour mole talking about ways to get more disabled people into work, and found his remarks being taken wildly out of context and made to sound as though he believe that disabled people were inherently “worth” less money. And only a matter of days ago, alarmists in the media seized on a policy misunderstanding by Mark Reckless to shriek that UKIP wants to deport all foreigners and is a racist party. The resulting sensationalist stories further diverted us from having serious discussions about serious issues – helping disabled people into meaningful work, and mitigating the negative aspects of large-scale immigration.

So what can we actually learn from this sorry saga? That Emily Thornberry is a terrible snob who looks down on white van man, his tastes and his concerns? That may be so, but with just one ambiguous tweet to go on, the High Court of Social Media has not presented enough evidence to make the case. That the modern Labour Party as a whole looks down on white van man, and those striving to get ahead without heavy-handed government assistance? Yes, but Labour’s working class problem is hardly news; there can hardly be anyone left in Britain who remains unconvinced of this sorry state of affairs.

Far more revealing than any possible disdain for the working classes that Emily Thornberry may have shown is the hysterical reaction of her leader, Ed Miliband. Does Britain really want as its next prime minister someone who flies off the handle at the first sign of a potentially damaging tweet? Or someone who is willing to throw a loyal colleague and supporter under the bus in a desperate bid to avoid his own negative press? Ed Miliband has proven himself willing to stoop to any depth in order to salvage his failing leadership, so we cannot say we weren’t warned if he flounders just as badly in Number 10 Downing Street.

Yes, the only real takeaway from Labour’s self-immolation in Rochester is another addition to the litany of reasons why Ed Miliband does not deserve to become Prime Minister in May. The reason that Thornberry’s tweet caused so much panic in Labour high command is because it hinted at an obvious truth. Whether or not the former Shadow Attorney General herself is guilty of looking down at the working classes became almost immaterial, because her artless social media post could so easily be interpreted as representing that common point of view, the cold hard reality of today’s modern Labour Party. As this blog recently noted:

[The Labour leadership] all rose to power in a political system that is heavily centralised, where real ideological difference has been supplanted by muddled centrism, where messaging trumps ideas, where local politics and the opinions of people far from Westminster exist only to be scorned or exploited, and where where the political intake is now so unrepresentative of the general population that senior politicians are genuinely baffled by the fact that whole swathes of the country hold quite different views on immigration, globalisation, protectionism and patriotism.

Under Ed Miliband, the Labour Party has become utterly disconnected from its base, captured instead by a London-centric elite who haven’t done a day’s work in the private sector in their lives, and who are completely unable to empathise with the concerns and aspirations of the working classes or the upwardly mobile.

Emily Thornberry was guilty of no more than inadvertently reflecting the unpleasant image of the soulless, rootless modern Labour Party, and for that unforgivable sin she was cleaved from the herd by her spineless colleagues. There was no chance to explain herself or why she took the picture; summary justice was executed simply because the optics were awkward, and because Ed Miliband wanted to change the narrative.

Welcome to the sorry era of Sudden Death Politics.