Three words and a picture.

That’s all it took to bring Labour MP Emily Thornberry‘s front bench career as Shadow Attorney General to an end, after being tried and found guilty in the High Court of Social Media of the crime of… taking a picture of a house, and posting it on Twitter whilst out campaigning in Rochester and Strood on the day of the by-election.

Emily Thornberry has resigned from the shadow Cabinet for sending a Tweet that appeared to mock a Rochester voter who was flying several St George’s Cross from their window and had a white van parked outside. Thornberry’s resignation follows Miliband aides briefing that the leader was the angriest they’d ever seen him after being told about the tweet. All this shows just how sensitive Labour is to the charge that it is now a party run by a metropolitan elite who have little connection with the party’s traditional working class base.

Let’s step back. The tweet “appeared to mock” the Rochester and Strood resident? Only someone with the psychic ability to read Emily Thornberry’s mind could know whether she intended to mock him or not. A picture of a house and vehicle cannot by themselves constitute mockery, and the terse caption “Image from Rochester” is equally inscrutable. Anyone other than Emily Thornberry claiming to possess full knowledge of the spirit in which the picture was taken and posted is vastly overestimating their journalistic, political or clairvoyance skills.

END_OF_DOCUMENT_TOKEN_TO_BE_REPLACED

“To win new recruits, motivate their activists and sustain the interest of politicians and the media, UKIP need to overcome the wasted vote syndrome and appear as a credible choice at general elections” – Robert Ford and Matthew Goodwin, Revolt on the Right: Explaining Support for the Radical Right in Britain

UKIP’s victory in the Clacton by-election, giving the party their first MP, was bad for the political establishment.

The ComRes poll giving UKIP’s Mark Reckless a 13-point lead ahead of the Rochester by-election was awful.

But these local by-elections, history-making as they are, can only do so much damage – they give the main political parties, particularly the Tories, a black eye, and not much more. Even if UKIP go on to win the by-election in Rochester and Strood as now seems likely, Mark Reckless and Douglas Carswell will still only form a caucus of two at Westminster, hardly enough to start flexing their parliamentary muscles or influencing legislation.

However, a poll just released by Opinium and The Observer reveals something that could shake the establishment to its foundations: 31% of voters would now support Nigel Farage’s party if they believed UKIP had a credible chance of winning in their local constituency. Nearly a third of the electorate are ready to wash their hands of big three political parties entirely, and vote for a new, untested alternative. Not just in the local or European elections, where UKIP are already establishing a track record of success, but in the United Kingdom’s general election next year.

END_OF_DOCUMENT_TOKEN_TO_BE_REPLACED 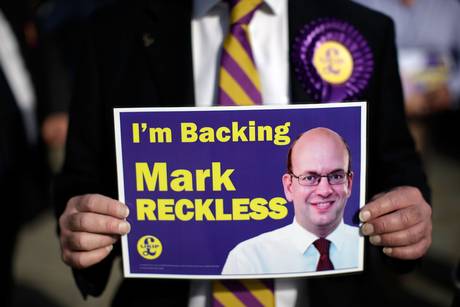 Of course UKIP were going to do well in Clacton, the establishment consoled themselves after Douglas Carswell eviscerated the Tories in his thumping by-election victory.

After all, they said, Carswell’s seaside constituency is chock full of exactly the type of unlettered, economically left-behind losers who would be hoodwinked by Nigel Farage’s politics of grievance and fear. But just wait until Rochester and Strood, when the less personable Mark Reckless has to face his more enlightened constituents at the ballot box after jumping ship to UKIP. The Tories’ formidable campaigning operation will kick into gear, the UKIP advance will be halted and normal political order will be restored.

So went conventional wisdom, and the general thrust of most mainstream analysis in the aftermath of the Clacton result. But no longer. A poll by ComRes, released last night, gave UKIP a commanding 13 point lead in the Rochester and Strood constituency, with UKIP on 43%, Conservatives on 30%, Labour on 21% with the Greens and Liberal Democrats fighting for scraps with 3% each.

It’s now officially time to panic. And each faction of the British political establishment is quietly losing the plot in their own uniquely predictable way.