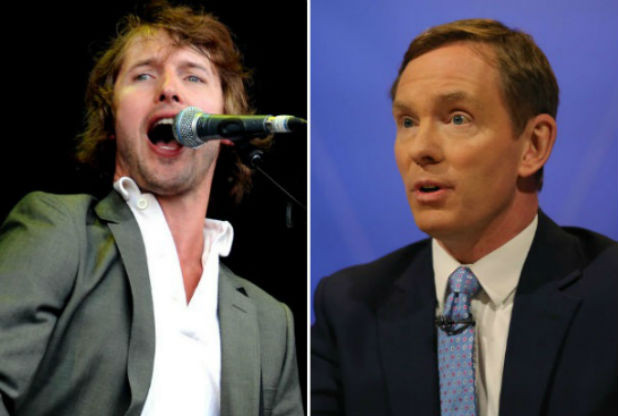 We may as well just admit it: the Labour Party has a serious class problem.

Just as the memory of Ed Miliband’s hasty sacking of his ally Emily Thornberry for the crime of tweeting a picture of a white van was starting to fade from memory, the new Shadow Culture Secretary, Chris Bryant, found himself on the wrong end of a tongue-lashing from singer James Blunt after appearing to suggest that some of Britain’s most successful performing artists had succeeded at the expense of their working class peers.

Both the Guardian and the Telegraph sum up the story well enough, complete with blow-by-blow accounts of the duelling letters exchanged between Bryant and Blunt. And the Spectator is quite right to point out the irony of a Labour shadow minister decrying the lack of ladders to success for working class artists, when it was the Labour legacy of closing grammar schools that so contributed to the problem of lack of social mobility.

On the plus side, parts of James Blunt’s angry letter resemble the anti-Labour comeback that every Tory wishes that he or she could make, if only they could think a little quicker on their feet:

And then you come along, looking for votes, telling working class people that posh people like me don’t deserve it, and that we must redress the balance. But it is your populist, envy-based, vote-hunting ideas which make our country crap, far more than me and my shit songs, and my plummy accent.

I got signed in America, where they don’t give a stuff about, or even understand what you mean by me and “my ilk”, you prejudiced wazzock, and I worked my arse off. What you teach is the politics of jealousy. Rather than celebrating success and figuring out how we can all exploit it further as the Americans do, you instead talk about how we can hobble that success and “level the playing field”. Perhaps what you’ve failed to realise is that the only head-start my school gave me in the music business, where the VAST majority of people are NOT from boarding school, is to tell me that I should aim high. Perhaps it protected me from your kind of narrow-minded, self-defeating, lead-us-to-a-dead-end, remove-the-‘G’-from-‘GB’ thinking, which is to look at others’ success and say, “it’s not fair.”

But it is what Chris Bryant MP said when he wasn’t undermining the success of Eddie Redmayne and James Blunt that deserves the most attention, for it reveals something rotten at the core of today’s Labour Party.

From the Telegraph report:

In his first interview since taking the opposition culture, media and sport brief, Mr Bryant also called on cultural institutions to do more to increase inclusivity.

“Is the BBC, ITV, Channel 4, doing that kind of gritty drama, which reflects [the country] more? We can’t just have Downton programming ad infinitum and think that just because we’ve got some people in the servants’ hall, somehow or other we’ve done our duty by gritty drama,” said Mr Bryant.

This school of thought, increasingly common in today’s soulless Labour Party, is full of opinions about what is best for the working class, but very short on first-hand experience. Is Chris Bryant suggesting that working class actors are only capable of playing gritty roles, and characters who engage in crime, domestic abuse and tumultuous relationships? Or does he believe that the scandalous world of Eastenders or Coronation Street is typical of the working class experience?

If the Tory Culture Secretary, Sajid Javid, had uttered such nonsense the Guardian would be in an uproar, and commentators such as Owen Jones would be taking to their keyboards in fits of self righteous fury. But since it was one of “Team Red” who made the offending comments, we will likely hear nothing. Indeed, the Guardian is doing its level best to come to Chris Bryant’s aid.

Why? Because Chris Bryant’s comments provide  a depressingly accurate glimpse of the modern Labour Party’s attitude toward the working class, the people their party was founded to represent. Most of Ed Miliband’s shadow cabinet have never set foot on a council estate unless compelled to be there while hunting for votes, have never held a real job outside politics, and probably believe that the antics they hear about on EastEnders (they don’t watch themselves, of course) could just as easily be a reality show based on the lives of their voters.

How could they be? A plurality of voters are very worried about immigration, but Labour insist that everything is fine and refuse to admit any failings from their last thirteen years in government. The British people are sceptical of the European Union, TTIP and any attempts at enforced international corporatism, and yet Ed Miliband embraces the EU and would give away even more sovereignty to Brussels, if only he could avoid the political fallout. An economic recovery characterised by zero-hour contracts and minimum wage McJobs lays bare the cost of exposing an undereducated British workforce to the ravages of competition, but Labour staunchly oppose any move that promises to encourage aspiration and high achievement at the expense of universal mediocrity.

And yet on some subconscious level, Ed Miliband’s Labour Party still understand that they are supposed to be on the side of the common man, or at least look the part. They can’t forget that they chose to play for Team Red in the game of British politics, and that it is therefore expected of them that they will talk about things like class and equality of opportunity. But the words no longer sound sincere, coming almost exclusively from the mouths of privately educated shadow ministers whose only other job involved working as Special Advisers to the previous generation of New Labour politicians.

The former Shadow Attorney General Emily Thornberry was not at fault when she tweeted that harmless picture of a white van parked in front of an England flag-festooned house. But Ed Miliband felt compelled to sack her because the mere fact of her tweet drew attention to his own grievous legacy: a modern Labour Party entirely owned and operated by the prosperous political class, and beholden to a metropolitan bourgeois supporter base who hold very different values and aspirations than the party’s traditional northern, working class roots.

Chris Bryant’s comments are much the same – his intentions were harmless enough (save the usual hostility toward success that we expect from the left), and yet they reveal the yawning and widening chasm between the modern Labour Party and the people it still pretends to represent.

Working class people are not automatically “gritty”. Nor are working class actors capable only of playing gritty roles. A legitimate debate about encouraging wider access and representation in the performing arts has been overshadowed by a typically ignorant intervention from yet another overprivileged, underexperienced Labour MP.

Ed Miliband’s Shadow Culture Secretary might do well to frame his thoughts more carefully in future, and to make sure that his colleagues learn from his mistake, if Labour really is serious about earning the working class vote in 2015.