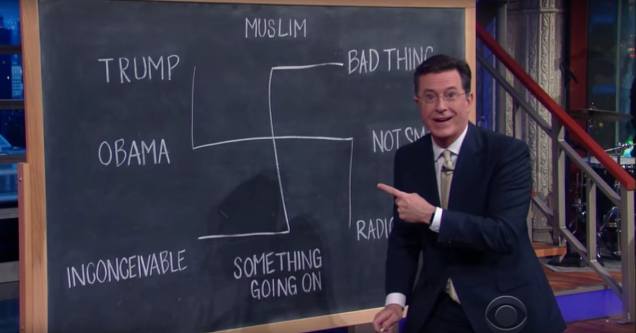 When it becomes good business for left-wing late night comedy hosts to actively alienate and belittle half the country, it is clear that Donald Trump is not the only force stoking hatred and division in America

While in New York City last December, my wife and I were fortunate to get tickets to see The Late Show with Stephen Colbert being recorded at the Ed Sullivan Theatre.

It was a good show and ended up being a really fun experience, but as somebody who cannot reliably tick the “Yes, I agree” box next to every progressive cause under the sun, it was only fun because I knew what I was letting myself in for and readied myself in advance for an hour’s worth of dripping condescension, mockery and misrepresentation of conservatives and conservatism.

And increasingly that’s how it is for conservatives – and even some moderates – who want to consume the fruits of mainstream culture, be it network television, Hollywood movies, stand-up comedy or even classical music. Sure, you can watch – nobody barred me from entering the studio or administered an ideological test before I was allowed to sit and watch Stephen Colbert spit-roast Donald Trump in his monologue for the hundredth time. But in order to derive uninterrupted enjoyment from proceedings, those on the right increasingly have to perform a certain degree of mental disassociation from their political views before taking part. One has to fake laughter and perfect the wryly amused smile so as not to look out of place while everyone else clutches their sides and laughs at the Stupid Backward Conservatives.

During the warm-up act before Stephen Colbert came out, the warm-up comedian scoured the audience looking for interesting or odd people, and then made them stand up and engage him in conversation for the delectation of the audience. Pretty standard for a warm-up act, but one person in particular seemed to pique the warm-up comedian’s interest – a slightly patrician-looking, grey-haired and well-dressed man in his late fifties or early sixties. “A Republican in the audience!”, the comedian exclaimed.

The comedian got the man to stand up, confirmed that he was indeed a conservative and then went to town on him in a way which was superficially good-natured but as it dragged on (far longer than his other interactions) quickly became quite awkward both for the gentleman involved and a number of other audience members. This isn’t to resort to snowflakery – go to a comedy show and one should expect to get picked on by the person on stage, after all – but it was notable and entirely predictable that none of the conspicuously progressive stereotypes sitting in the audience received similar treatment. And of course this was but a foreshadowing of what would happen when Colbert himself took the stage (we in the audience were under strict instructions not to “spoil the fun” by booing at any point, though this rule was liberally disregarded when any mention was made of a conservative figure or policy).

Left-wing satire can be brilliant. I always felt that during his long tenure at The Daily Show, Jon Stewart did a fantastic job skewering the many foibles and failings of the George W. Bush administration without coming across as aggressively bitter or hostile to everyday conservative voters. He may not have been speaking to them for much of the time, but neither was Jon Stewart actively belittling those people who twice voted for Bush. Other late night hosts such as Bill Maher often make more pointed barbs directed at ordinary conservatives, but in Maher’s case his jokes are much funnier and are balanced with a frequent willingness to call out the excesses, failings and hypocrisies of his own side (such as the free pass given by much of the American Left to retrograde attitudes toward women in parts of the Islamic world).

Stephen Colbert, while often very funny, is less nuanced. As a non Trump-supporting conservative I personally fall down the awkward gap between agreeing with nearly all of Colbert’s criticisms of President Trump’s personal conduct and suitability for office while also wishing that not every single monologue had to be come a teachable moment about the supposed deficiencies of conservatism, the self-evident correctness of progressive positions and the supposedly inherent wisdom of even the dimmest people who happen to cheer for the progressive cause.

And this brings us to fellow late night talk show host Jimmy Kimmel, who took the opportunity (in front of an extremely friendly crowd of fellow progressives) to use a guest appearance on left-wing podcast Pod Save America to declare that progressive domination of late-night television was entirely right and proper, Darwinian natural selection at work within showbusiness.

“It just so happens that almost every talk show host is a liberal and that’s because it requires a level of intelligence” – @jimmykimmel @PodSaveAmerica live pic.twitter.com/yNKbpzVNUp

From Ben Shapiro at The Daily Wire:

Following President Trump’s State of the Union address last week, CBS late night host Stephen Colbert had on the former Obama staffers of “Pod Save America” to bash Trump. Those same gentlemen welcomed ABC late night host Jimmy Kimmel to the stage for an event on Saturday night, where Kimmel proceeded to explain that all late night hosts are on the Left thanks to their vast intellect.

What a ridiculous and unnecessarily smug thing for Kimmel to say. One cannot rend one’s garments about hatred and division in America and then declare everyone on the winning side of a highly contentious election to be intellectually inferior. These are not the shocked and panicked moments immediately after election night in 2016 – by this point the American Left has had a long period of time to dwell on their missteps and shortcomings in that electoral cycle, but many Democrats and others on the left choose instead to marinade in their own anger, as though shouting at the other half of the country will win them around.

I have also been to a live recording of Pod Save America. It is actually a podcast to which I subscribe and listen frequently, and so when the hosts came on tour to London in January I went with a group of friends to Cadogan Hall to hear them do their thing. At its best, Pod Save America is entertaining and informative, albeit from an avowedly left-wing stance, and there is a real value to hearing how some of the most prominent alumni from the Obama administration view today’s politics. Being a left-wing podcast, nobody expects them to do anything other than preach to the choir in every episode, which is no worse than what many right-wing talk radio hosts do. But surely we should expect a little more from late-night network television?

Nothing good can come from the bitterness and rancour which currently seeps from the late-night talk shows. Network television comedy should bring people together, or at least not needlessly alienate them from one another. It may be good business for late night TV hosts to cater almost exclusively to staunchly Democratic voters – NBC’s Jimmy Fallon, who deliberately stays less political, is certainly suffering in the ratings for failing to bash conservatives on a nightly basis – but it is bad for our society as a whole.

A cohesive society requires that we maintain a public square where everyone is welcome, where people are not encouraged to self-segregate as progressives or conservatives, Christians or Muslims, whites or racial minorities. Where everybody can be American (or British) first and subordinate their various other identities and affiliations, albeit temporarily, to the one which we all hold in common. But time and again we see what should be common territory – places like  late night television or NFL football games – being tussled over by partisans until one side is forced to cede the field. When everything is political, everything becomes divisive and toxic.

In his latest show, Ben Shapiro makes a similar point with reference to last weekend’s Superbowl LII in Minnesota:

And that’s not true in politics, you know, in politics there’s a lot of our conflict that’s not, that’s real, that’s about issues that matter and I care deeply about. But it’s good for Americans to recognise once in awhile – and I think that’s what the Superbowl is for – it’s good for us to recognise every once in awhile that there are these moments where we have more in common than we are separated by. So it’s amazing that in an evening that’s really about conflict between two teams is really more about the love for fans for one another. It’s really more about a love of country. It’s really more about what we are unified in favour of, and that’s why it was so entwined with the flag, with the military, and it’s why it alienated so many fans when the players started kneeling.

This is a time when we need to urgently be creating more shared, civic spaces where people of differing political views, backgrounds and identities can come together as fellow citizens first and foremost, not as victims, oppressors or activists. America actually fares better than Britain in this regard, since displays of patriotism and national pride are not yet considered quite so embarrassing or gauche as they are in Britain (though some on the American Left would doubtless love to change that fact), but neither country can afford to be complacent.

And here, late night television serves as a good barometer of just how polarised society has become. There are many excellent and respected comedians at the top of their field who do not feel it necessary to turn their acts into another campaigning wing of the Democratic Party. But many conservatives having already largely abandoned late night television, it does not make sense for ratings (and therefore for business) to do anything other than give the remaining progressive audiences exactly what they want – just ask Jimmy Fallon, who lags in the ratings precisely because he refuses to turn his show into a platform for progressive revivalism.

We see exactly the same situation in Britain, where new satirical news show The Mash Report (itself billed as hybrid of the Daily Show and British current affairs shows like Have I Got News For You) make endless fun of Brexit voters and conservatives as though being left-wing and pro-EU is the “natural” position, from which any departure should rightly trigger outrage and mockery. From a business and professional standpoint there may be every reason to continue along the current trajectory (including high ratings, monetary rewards and approval from fellow bubble-dwellers in the industry), but that doesn’t mean that the status quo is good for societal cohesion. It isn’t. There was a time (before Brexit) when people on the Left used to understand that not everything of value could be quantified, but apparently no more.

The best satirical comedy tends to punch upward, not down (though of course in a free society it should be free to punch wherever it likes). It should be possible to punch up at Donald Trump while reserving a few blows for other highly deserving fixtures of American political life, including the cadaverous and inept figures who make up the Democratic Party leadership. It should be possible to punch upward at ludicrous Tory Brexiteers like Boris Johnson while also using humour to point out the starry-eyed naivety of those on the Left who see the European Union as the fount of all good things.

But most importantly, it should be possible to punch up at the political class while avoiding punching down at entire groups of voters, let alone nearly half the country. Because when it becomes good business sense to deliberately alienate half the country to wring laughter and advertiser dollars from the other half, something has gone terribly wrong. 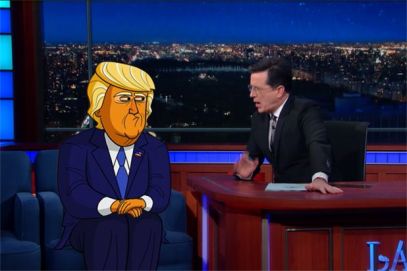