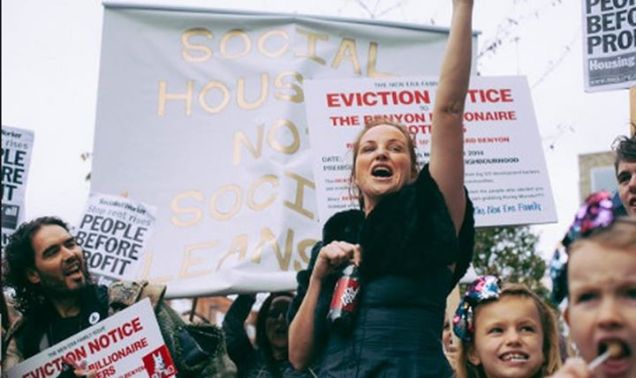 This article was originally published on the In My Shoes blog, and subsequently at Guerilla Policy.

It took Hitler’s Luftwaffe to provoke the last great exodus of people from London. First went the children, evacuated en masse to the care of strangers in the countryside, and then after the war whole families were relocated from the rubble of the Blitz to the post-modern New Towns of Britain’s brave new world.

Fast-forward seventy years, and a new displacement is underway. But in 2014, people are being driven from their homes and communities not by bombs from the air but by the process of gentrification and the callous indifference of London’s housing market.

Today’s high-profile case is that of the New Era housing estate in Hoxton, which houses over 90 families at below-market rate rents. Earlier this year, the estate was bought by American property management company Westbrook Partners, who announced their intention to serve notice to the tenants, refurbish the flats and let them at market prices.

The Guardian contrasts the philanthropic spirit that conceived the New Era estate with the vulture capitalism that now threatens to tear it down:

[The estate was] built by a charitable trust in the 1930s in order to offer working-class residents affordable private rented accommodation. Even when the blocks were sold this spring, residents say they were assured that the old tenets would apply. Within weeks, new owners told them that rents would rise to market values: spiralling from £600 a month for a two-bed flat to something closer to £2,400. That was meant to happen by summer 2016. After [Conservative MP Richard] Benyon’s firm pulled out of the deal last week, residents were told that Westbrook would accelerate the process.