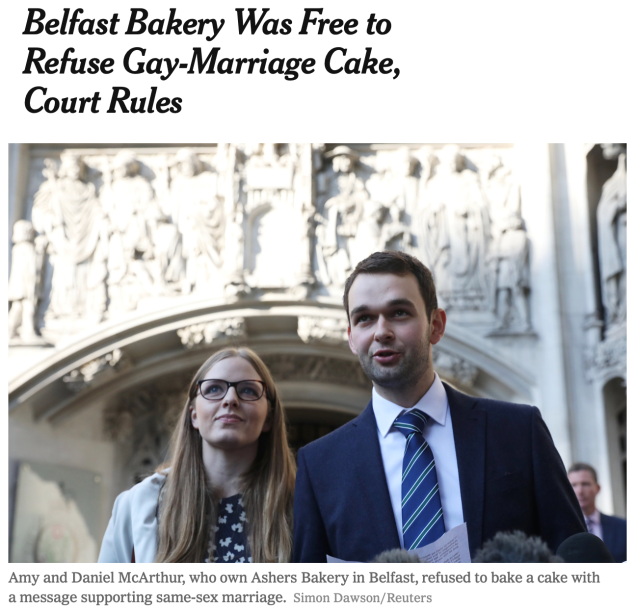 Today saw a victory against compelled speech and authoritarian government, but fewer and fewer voices on the Left are in the mood to celebrate

Today the Supreme Court of the United Kingdom handed down a decision in Lee v Ashers Baking Company Ltd, the UK’s equivalent of the Masterpiece Cakeshop case in the United States (which the UK court actually cited in its ruling).

Both cases came about when plaintiffs claimed discrimination based on sexual orientation after trying to place an order for wedding cakes bearing messages supportive of gay marriage at bakeries owned and operated by traditional conservative Christians, who then refused the orders on the grounds that to produce the cakes bearing the specific messages would violate their deeply held religious beliefs.

The UK’s highest court ruled that Ashers bakery’s refusal to make a cake with a slogan supporting same-sex marriage was not discriminatory.

The five justices on the Supreme Court were unanimous in their judgement.

[…] The customer, gay rights activist Gareth Lee, sued the company for discrimination on the grounds of sexual orientation and political beliefs.

But the bakery has always insisted its objection was to the message on the cake, not the customer.

I have long taken the view put forward many years ago by Andrew Sullivan, that gay marriage should be accepted on the grounds that broadening an institution which promotes stability, permanence, mutual responsibility and (consequently) social capital can only be a good thing, especially at a time when social atomization and selfish, destructive cultural hedonism are doing so much to weaken vital bonds at the community and national level.

I would never advocate (nor tolerate) religious institutions being forced to conduct gay marriage ceremonies against their will, but rolling out the basic template of marriage and making it more widely accessible – especially to one of the only demographics which currently shows any enthusiasm for the institution! – seems perfectly sensible to me.

But even more abhorrent than the idea that the government might compel religious organizations to conduct ceremonies which violated their codes and moral systems is the  prospect of government compelling the speech of ordinary people, making anybody who wishes to participate in the public square affirm certain social dogmas on pain of civil or criminal liability. We have already seen Canada start to go down this road with Canadian Bill C-16, a statutory amendment which adds gender identity and gender expression to classes of individuals protected under Canadian human rights law, and moves perilously close to criminalizing the “misgendering” of people. Thus it is not inconceivable that someone could be held criminally liable in Canada were they to refuse to conform their speech to proclaim that trans women are women and trans men are men.

Compelled speech is the very last thing a healthy liberal democracy should be striving to enact. Thus it is great to see at least one human rights and civil liberties group – one which has not yet fully prostrated itself before the Cult of Social Justice and Identity Politics – celebrate the Ashers Baking Company decision.

From the Peter Tatchell Foundation:

“This verdict is a victory for freedom of expression. As well as meaning that Ashers cannot be legally forced to aid the promotion of same-sex marriage, it also means that gay bakers cannot be compelled by law to decorate cakes with anti-gay marriage slogans,” said human rights campaigner Peter Tatchell, Director of the Peter Tatchell Foundation.

“Businesses can now lawfully refuse a customer’s request to emblazon a political message if they have a conscientious objection to it. This includes the right to refuse messages that are sexist, xenophobic or anti-gay, which is a good thing.

“Although I profoundly disagree with Ashers opposition to marriage equality, in a free society neither they nor anyone else should be forced to facilitate a political idea that they oppose.

“The ruling does not permit anyone to discriminate against LGBT people. Such discrimination rightly remains unlawful.

“Ashers did not discriminate against the customer, Gareth Lee, because he was gay. They objected to the message he wanted on the cake: Support gay marriage.’

It is sad that statements like this now have to be cheered and encouraged rather than taken for granted by civil liberties defenders and free speech advocates, but such are the authoritarian times in which we live – trapped in a pincer movement between what Maajid Nawaz calls the “Control Left” on one side, and reactionary, protectionist nationalists on the other.

Proving that he is one of the few prominent voices on the British Left who remains capable of thinking through the consequences of implementing illiberal leftist identity politics dogma heedless of the ramifications, Tatchell continues:

If the original judgement against Ashers had been upheld it would have meant that a Muslim printer could be obliged to publish cartoons of Mohammed and a Jewish printer could be forced to publish a book that propagates Holocaust denial. It could have also encouraged far right extremists to demand that bakers and other service providers facilitate the promotion of anti-immigrant and anti-Muslim opinions.

Of course it wouldn’t be; we know that the administrators of this illiberal code – including establishment figures as powerful as the former head of the Crown Prosecution Service – would implement any such statutes or case law highly selectively, punishing only the disfavored “white, Christian male” group while refraining from holding other groups to the same draconian standard. But Tatchell is quite right that the argument for compelled speech, taken not even so far as to its logical conclusion but merely a few steps down the road, would swiftly end up censoring and controlling us all.

The real concern is that old-school campaigners like Peter Tatchell are a dying breed. In fact, they are being hunted to extinction by a new generation of social justice warrior activists whose petty accomplishments are nothing compared to someone like Tatchell (who, like him or not, has labored for years and put his body in harms way more than once in advance of his ideals) but who deludedly think they morally outrank him because they are willing to go further in their rhetorical, legal and constitutional attacks on dissenters.

This is a time when conservatives – indeed, anyone not of an ultra-progressive persuasion – need to pick their battles very carefully. Social conservatives may disagree vehemently with the social views of someone like Peter Tatchell, but in this authoritarian age it is not he who seeks to impose his views on others. Indeed, given the opportunity, some social conservatives would be more likely to impose their own views on progressive dissenters than Tatchell would do to them – which should give serious pause for reflection.

At this time the threat to fundamental rights and civil liberties, when the identity politics Left is hell-bent on compelling the speech of private citizens, forcing them to say words or endorse ideas in which they do not believe, old political divisions must be put aside in order to withstand the creeping incursions of authoritarianism into society. There will be time enough to relitigate social issues once we have jointly confronted and dispensed with the band of zealots who would actually put us in prison for thinking the wrong things.

In these fractious times, the sane(r) Left urgently needs shoring up. Because if things continue on their current trajectory, Peter Tatchell’s ideological opponents on the right will miss him when he is gone. 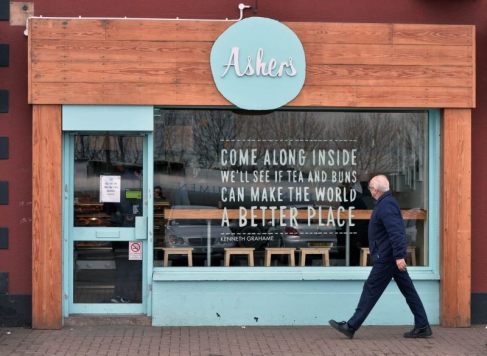 Agree with this article? Violently disagree? Leave a comment.