It’s easy if you try

Imagine a Britain without the NHS.

A Britain where the state did not directly employ or contract nearly every doctor and nurse in the entire country.

A Britain where the government did not decide which cutting edge treatments would be offered to the public, and which ones were simply too expensive.

A Britain where citizens were not reliant on the state for the physical delivery of nearly all their healthcare needs.

A Britain where healthcare was unconstrained by politically influenced national targets.

A Britain where angry, jealous talk of “postcode lotteries” did not act as a brake on excellence or a requirement for dull, uniform mediocrity.

A Britain where every hospital superbug or missed A&E waiting target did not automatically become the prime minister’s overriding personal concern, freeing them up to actually be a world leader.

A Britain where we are able to have a rational, level-headed discussion about healthcare, and what kind of system would achieve the best outcomes for the most people at an acceptable cost.

A Britain where we understood that healthcare need not be a choice between the NHS and the infamous US system.

A Britain where we were able to take inspiration from the best aspects of different healthcare systems around the world in reforming our own.

A Britain where criticism of the NHS was not treated like blasphemy, with the offenders shamed on social media and their political careers curtailed.

A Britain where we gave nearly as much respect, honour and resources to our armed forces and veterans as we do to the NHS.

A Britain where we did not reflexively worship a giant, mid-century bureaucracy as our secular national religion.

A Britain which thought enough of itself to realise that there is far more that marks us out as a powerful, great and indispensable nation than our anachronistic 1940s healthcare system.

A Britain where saying “the NHS served us ably for many decades after the war, but now it is time to look again at how we provide healthcare to our fellow citizens” was not a shocking, unacceptable statement.

Imagine a Britain where the link between politics and healthcare was broken and the NHS monopoly split up, meaning that things like the coming national strike of junior doctors could never happen.

Just imagine what could happen – all that we could accomplish – if only we were able to have a calm, rational conversation about healthcare in modern Britain. 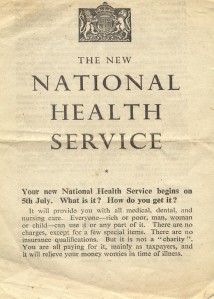 Our deadly obsession with the NHS

A Haidtian take on ‘NHS worship’

Britain’s cult-like worshop of the NHS must end

To save the NHS, let’s stop worshipping it like a god

8 thoughts on “Imagine Britain Without The NHS”