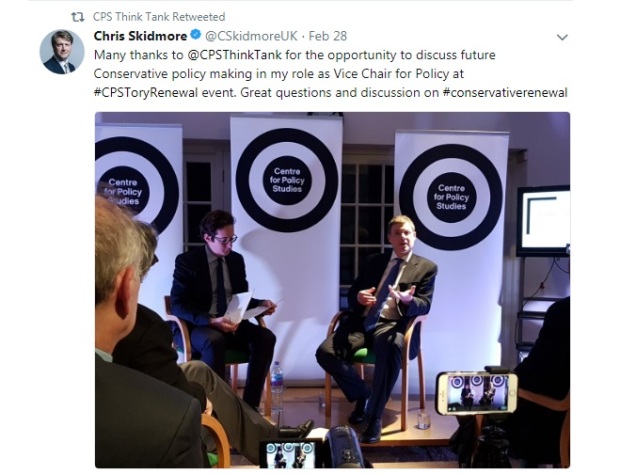 Faint signs of optimism for the future of British conservatism, and an opportunity to pitch Stepping Stones 2022

The other day, after hitting “publish” on another one of my increasingly repetitive blog posts pressing the case for positive renewal within the British conservative movement, a friend had this to say about me:

Billions of years from now, when the last proton decays and the wailing of AC Grayling can no longer be heard, the final sound in the Universe will be Sam saying he can still save the Tories.

A fair point, amusingly made. Quite possibly through sheer ignorance of political machinations combined with my lonely position on the outer, outer, outer periphery of Westminster life, I am imbued with a natural optimism which tells me that however far the Conservative Party may stray from the path of visionary, principled government, there is always a way back.

An annoying voice in the back of my head keeps insisting that just as with the “twitch upon the thread” in Brideshead Revisited, the Conservative Party can wander to the edge of the world under the non-leadership of Theresa May and yet still eventually be brought back to the faith – though I’m not delusional, and also accept the possibility that eventual outcome may be rather less optimistic:

The world is made up of Francesco Schettinos and E. J. Smiths. I seem to be doomed to the latter's fate. https://t.co/eCUJBkcgwm

Others in my circle have understandably given up hope and effectively adopted a “let it burn” stance with regard to the entire British political system, but to me this seems like an indulgence. I am about as idealistic as they come, but still I acknowledge that politicians must to a large extent operate within the ballpark of existing public opinion, even when that public opinion is the reason for our current strategic impasse on nearly every important decision.

I have attended a number of events on the subject of conservative renewal over the past couple of years, and read and written countless words on the subject, but nearly every event thus far has left me rather underwhelmed. Either the basic optics were all wrong (like inviting Home Secretary Amber Rudd of all people to talk about encouraging visionary new policies) or the words were right but lacked any sense of plausibility.

And perhaps it is precisely because the most recent event I attended – Wednesday evening’s Centre for Policy Studies conversation with Chris Skidmore MP on the topic of Conservative renewal in government – did not promise the moon on a stick or suggest easy answers that I ended up coming away feeling more buoyed and encouraged by what I witnessed than has been the case in over six years.

Part of the reason was undoubtedly due to having attended the event with Chloe Schendel-Wilson, an optimistic young voice within British conservatism, something of a rising star and about as welcomely different from the stereotypical Young Conservative activist as one can imagine. Prior to the CPS event we had the opportunity to talk about what it might actually take to bring about meaningful conservative outreach to younger voters who have no time for Corbynism but currently see nothing positive in the Conservative Party, which has given me much food for thought.

But Chris Skidmore himself, in his role as vice chairman for policy, also talked a lot of sense, beginning with his acknowledgement that “there is a battle for the soul of the country, not only the size and shape of the state but also the future of markets”. Skidmore spoke about a return to “an age of extremes”, but to my mind there is presently just one extreme in British politics – that offered by Jeremy Corbyn and a Labour Party captured more than ever by the toxic Cult of Social Justice and Identity Politics. In the face of this danger, the Tories by contrast are not merely not extreme but positively wishy-washy, scampering to the Left on everything from market regulation, big government paternalism and disregard for the national defence. Would that the Tories actually offered a meaningful counterweight to Corbynism rather than the thirteen shades of beige painted by Theresa May.

Not everything that was discussed was on point. Much time was given by Chris Skidmore to talking about the need to create and promote “vertical narratives”, the kind of jargon I thought I had escaped when I left management consulting, which apparently involve telling marvellous and compelling tales about how children born in 2010 have flourished growing up under Conservative rule. I and several audience members thought that this was a bit of a stretch, that making the story about What Government Has/Can Do For Us will only draw us into an unwinnable war of promises with Labour, but perhaps there is something we’re missing.

Other points were much more welcome to hear, particularly when Chris Skidmore chastised the party for having failed to make any mention of the deficit in the 2017 manifesto, a striking feat of amnesia given the previous emphasis by David Cameron and George Osborne  (in rhetoric if not in deed). But best of all was Skidmore’s mention of the need for a timetable – a clear set of goals and ambitions for what the Conservative Party wants to achieve in government in 1, 5 and 10 years, something more tangible than clinging to power and surviving the daily news cycle.

Throughout the evening a lot of the right things were said – from the need for a strategic direction flowing down to granular policy goals on the one hand, to the need for “signpost moments” on the other – legislative or public relations events such as Iain Duncan Smith’s speech at the Easterhouse housing estate in Glasgow. This blog has always maintained that an “all of the above” solution to the current Tory malaise is required, that there is no single policy or personnel change which alone can staunch the bleeding (though of course signpost moments are pointless until there is a clear direction for them to point towards).

But as always, the proof is in the pudding – deeds, not words. And despite more of the right things being said at this CPS event than at previous gatherings on the future of conservatism, the same niggling doubts remained. My misgivings about the Centre for Policy Studies’ New Generation project is that it is so MP-centric.

The CPS’s greatest victories, particularly looking back to the 1980s, occurred because the think tank sought ideas from outside the Westminster political bubble and fed them into Downing Street rather than relying on those within the bubble and inevitably wedded to certain ways of doing things to then come up with disruptively innovative new policies. Yet at one point Chris Skidmore said, with specific reference to the 2015 and 2017 intakes of Tory MPs “we’re here now, we have something to say”. Fantastic. Are the rest of us allowed to make some suggestions at any point, or is this to be an entirely Westminster-centric talking shop? And if the latter, why would we expect the results to be any less dismal than the last few years of Tory policymaking?

And so when it came time for Q&As, I seized the floor to repeat my pitch for a new Stepping Stones report to identify and analyse the challenges and opportunities facing Britain as we approach the 2020s, understand how those issues are interlinked, chart a path for national recovery and then generate a coherent suite of mutually-supporting, politically feasible policies to deliver on that strategy. I emphasised the point that attempting to individually tackle the various “crises” afflicting Britain without understanding how they are linked together and solving them together rather than in silos.

I further emphasised that generating policy to tackle symptoms rather than root causes is time and effort thrown away, that Britain has entered an unstable new period of political discontinuity not seen since the late 1970s when the prevailing political consensus and its associated policy solutions no longer work nor command majority public support, and warned that the future belongs to the political party which acknowledges this fact and comes to the electorate with an entirely different pitch.

As should be evident to anyone with a brain and a pulse, Labour is currently streets ahead of the Tories in this regard, with the ascendancy of Jeremy Corbyn itself evidence that the Labour Party has rejected the previous centrist consensus in favour of something different (much as a bulk of the parliamentary party may grumble about it). Fortunately their new offering is not particularly compelling, and indeed is actively repulsive to many swing voters – but at least the faction currently leading the Labour Party is trying something new. At present, the Conservative Party under Theresa May can be easily portrayed as grey, worn-out guardians of a despised status quo – not a good foundation for future electoral success.

Will anything positive come out of all these meetings? Who knows. More and more, the right things are being said, and glaring failures and weaknesses finally acknowledged. But the epiphany is happening far too slowly, and as was pointed out during the event, any future strategic planning will be for nought if the Tories cannot rack up some positive accomplishments between now and the next general election. A few people approached me after the Q&A was over and expressed support for what I had said, which I take as an encouraging sign, but ultimately I don’t see any real Conservative renaissance taking place unless the party and its orbiting system of think tanks and advocacy groups cast off their insularity and start welcoming input from outside.

Seeking and accepting help from outside takes humility – the kind of humility often only borne out of prolonged, crushing failure. That’s what it took for the Tories to reconsider their slavish devotion to the failing post-war consensus policies of the 1970s, and that’s probably what it will take today.

The only question is how bad will things have to get before the conservative minds holed up in Parliament and Tufton Street recognise that they don’t have all the answers?