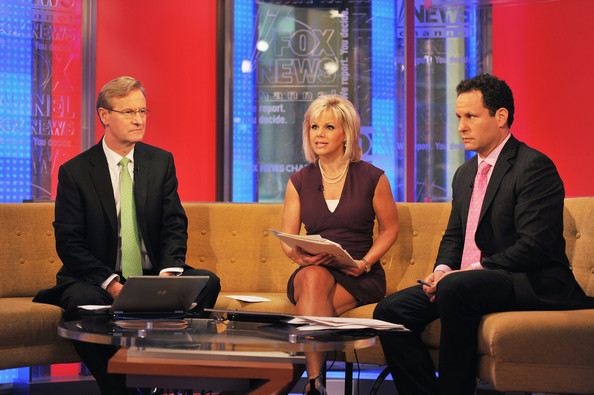 I generally try to avoid writing about the shenanigans that take place on Fox News’ morning show, “Fox & Friends”. The cast is assembled from a pool of failed, lightweight, B-team journalists who either know nothing about the complexities of the world (think Steve Doocy), or ones who are highly educated but disingenuously dumb themselves down to appeal to the Fox News viewer (think Gretchen “I looked up the word Czar in the dictionary” Carlson).

But on this occasion they make it to the pages of my blog because one of them – Brian Kilmeade, on the right in the above picture – was taken back to school by Senator John McCain, who was a guest on yesterday’s show. Politico reports:

Sen. John McCain criticized Fox & Friends’s Brian Kilmeade on Tuesday after the co-host said he had “a problem with helping out” members of the Syrian opposition who were shouting “Allahu Akbar” as rockets rained down in a government-held district of Homs.

During an interview with Sen. McCain, Kilmeade played the clip of the Syrian opposition fighters in order to suggest that McCain’s plan to deliver weapons to opposition groups could ultimately backfire, putting rockets in the hands of terrorists.

“Allahu Akbar” means “God is great”, of course. It is akin to a Christian shouting “Thank God!”, as McCain patiently explains to the dimwit Kilmeade. Just because a phrase is hijacked by radical fundamentalists and turned into a war cry as they fly aeroplanes into buildings or press the plungers on their suicide vests, does not mean that it loses its original meaning:

“I have a problem helping out those people screaming that after a hit,” Kilmeade said.

Sen. McCain fired back, “Would you have a problem with an American person saying ‘Thank God! Thank God!’?”

“That’s what they’re saying. Come on!” Sen. McCain said. “Of course they’re Muslims, but they’re moderates. I guarantee you that they are moderates. I know them and I’ve been with them. For someone to say ‘Allahu Akbar’ is about as offensive as someone saying ‘Thank God.'”

As difficult as it can sometimes be to agree with John McCain – given his erratic oscillations between being the bitter, ornery old man failed presidential candidate and the measured voice of reason and geopolitical knowledge (if not foreign policy wisdom) – one must admit that he is quite right in this particular case.

And if Brian Kilmeade needs any further reminder that hearing the phrase “Allahu Akbar” does not necessarily mean that a Big Scary Muslim is about to kill him, he would do well to watch the video, shared previously on this blog, in which a grieving Syrian father is reunited with the little son that he believed to have been killed in a strike by pro-Assad forces:

The words that the family and the overwhelmed father cry out in joy as they embrace the boy?