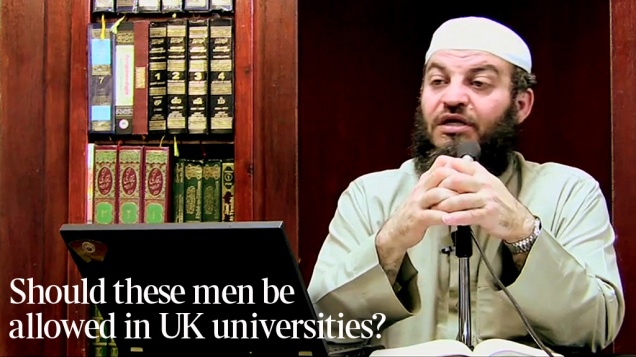 Prohibiting extremist preachers from speaking on university campuses will not stop the radicalisation of impressionable young minds – and the ongoing coalition row between the Conservatives and Liberal Democrats shows the Tories at their authoritarian worst.

“Should these men be allowed in UK universities?” frets The Times of London, in a report which begins:

Radical and intolerant Islamist leaders preached to crowds of students at almost 200 official events in the past year, according to a study of external speakers at universities including Cambridge, Birmingham and University College London.

Segregated seating for male and female students is understood to have been implemented for at least a quarter of those public meetings held by the Islamic societies at 21 universities.

The issue of university campus extremism has been brought into sharp relief since it emerged that Mohammed Emwazi, or “Jihadi John”, may have been radicalised while studying at Westminster University in London. This revelation has led to renewed scrutiny of various Muslim student organisations, their invited speakers and their practices (such as segregated seating in some instances). And this scrutiny is often welcome.

But the government goes too far when it seeks to make universities responsible for enforcing the censorship of ideas deemed “extremist”, as the BBC reports:

Universities should be removed from a list of institutions required by planned terror laws to crack down on extremism, MPs have said.

The Joint Committee on Human Rights said plans to require universities to stop people being drawn into terrorism would stifle academic freedom.

The committee also said the government plans were full of legal uncertainties.

UK universities said there needed to be a suitable balance between freedom of expression and preventing terrorism.

The context of this whole story is the increasingly blurred definition of the word “extremism”, which is now also being conflated with the milder term intolerance (see the Times article). It is bad enough that under the government’s proposals an idea could be deemed “extremist” and purged from university campuses when there is no direct incitement to violence, for none of us have the right to live in a country where our values and deepest held sensibilities go unchallenged.

But if the government now wishes to include “intolerant” speakers on their list of provocateurs approved for censorship, then we are in real trouble. The Cambridge and Oxford Union Societies in particular may suddenly find themselves with very empty schedules for the remainder of the academic year. But worse than this, the government would be doing the work of activist Students Unions and pampered millennials for them. There is already a disturbing effort underway in many universities to purge speakers and ideas that fall outside the narrow boundaries of approved thinking, primarily on social issues, and the last thing that believers in free speech and free enquiry needs is for the government to side with the tinpot censors.

Besides, universities are nothing if not places for the pursuit of knowledge and the robust discussion of ideas. So what better crucible could there be in which to expose, challenge and defeat the primitive, medieval anti-enlightenment dogmas of extremist Islam (and extremist fundamentalism of any form) than Britain’s great institutions of higher education?

Let the crazy preachers come, with their bellies full of hate and their desperate yearning for death. Those who would be swayed by Islamist extremist arguments will seek them out one way or another, in the age of YouTube. But at least in a university bad ideas can be challenged, speakers can be heckled and offensive statements can be protested. There may be no such counterbalancing opinion expressed at the Mosque, or the illicit online conversations between the extremist recruiters and their impressionable targets.

And if the extremist speakers abuse their right to free speech and openly incite violence, so much the better – they will have put themselves in clear breach of the law, at which point action can be taken against them. But so long as they restrict themselves to promoting their backward ideology, let them babble away to whoever will listen. And then respond with the one thing that acts as kryptonite to fundamentalist dogma – the power of reason.

Those who seek to ban speech which is contrary to British or western values have too little faith in those values they seek to protect – the inherent goodness of democracy, equality, pluralism and tolerance speak for themselves, and if any young Muslim students remain unconvinced of this then banning extremist speakers will not go anywhere near fixing the underlying problem.

Ultimately, speakers with “extreme” views are at their most dangerous only when they can legitimately claim that they are being hounded and persecuted by those in authority. Sit back and give them a free platform to spew their garbage while giving others the right to rebuttal, on the other hand, and they turn almost instantly from martyrs to idiots.

Fortunately for Britain, the Liberal Democrats were on hand to block this latest attempt at campus censorship – though the Telegraph leaves no ambiguity over which side they are on:

The Deputy Prime Minister personally vetoed the plan during private talks with David Cameron, after one of the worst Cabinet rows in the Coalition’s five-year rule.

Mr Clegg said he could not support moves to require university bosses to vet visiting speakers and prevent impressionable students from falling under the spell of extremists – because Liberal Democrats feared the move would erode “free speech”.

No doubt the likes of Theresa May will now seek to make political capital from the thwarting of their plans by painting Nick Clegg’s party as “aiding the terrorists”. But maybe the other wing of the Conservative party will yet see sense, and rediscover their faith in the enduring power of British values.

It seems that this government is willing to do almost anything and pursue any line of enquiry rather than stop and have a sensible discussion about the causes of Islamist extremism and the radicalisation of increasing numbers of young Muslims. And blog has long argued that politicians are negligent in their duties when they fail to face these problems.

Banning hate preachers from British universities will not constitute even a small step toward reducing the threat of terrorism. Those who say otherwise are grievously underestimating both the nature and scale of the problem we face.