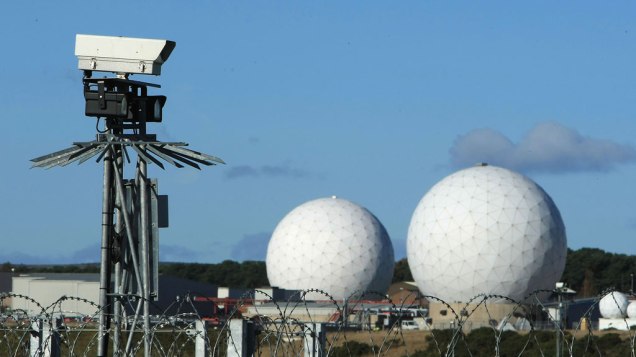 When determining how society should deal with people who have committed the most heinous crimes, one does not turn to the victims or their surviving family members for advice. And if one were to be so rash as to base Britain’s penal system on the vengeful feelings of grieving parents, spouses and children, there would be gruesome public executions every day in every town up and down the length of Britain, from Land’s End to John O’Groats.

So while we may feel every sorrow in the world for those who have been the victim of dastardly terrorist attacks, why do we give such credence to terror victims when it comes to formulating our approach to national security and civil liberties? While human compassion dictates that we offer our utmost sympathy to those who have suffered, allowing ourselves to be manipulated into making sweeping and draconian decisions based on heart-wrenching personal testimony is no way to run a country – whether we are talking about the NHS or government snooping laws.

Those in the media who report on these subjects for a living should know this best of all. And yet large swathes of the British press have spent today tacitly attacking the campaigning groups who defend our civil liberties, simply because they refuse to display the grovelling, servile fearfulness that begs government to take as many of our freedoms as they want in return for the illusion of greater safety.

The Times print edition, in an article bearing the sub-headline “outcry over campaigners’ attack on state snooping”, reports:

Leading civil liberty groups declared that a terrorist attack in Britain was a price worth paying to protect mass personal data from being intercepted, it has been revealed.

Victims of atrocities accused the privacy campaigners of protecting terrorists after the comments were exposed in a major report on the snooping activities of Britain’s spy agencies.

MPs and peers who compiled the report also criticised the groups, which include Liberty, Big Brother Watch, Justice and Rights Watch UK.

But what exactly was it that upset the unnamed “victims of atrocities”? While giving testimony to the Intelligence and Security Committee last year, civil liberties defenders had the nerve to suggest that in extremis, draconian government action taken to prevent terror attacks could cause more harm to the people than the crime which they were imposed to prevent.

In an ‘evidence session’ last October Hazel Blears, a leading member of the ISC quizzed Isabella Sankey, the director of policy for Liberty.

Ms Blears said that she and other committee members had seen classified documents which  demonstrated that such interception had exposed terrorist threats and plots.

However asked whether she would change her mind if there were evidence that showed bulk data collection had helped to prevent terrorist plots. Ms Sankey was quoted as saying: “No.”

She said such mass surveillance techniques were wrong in principle and added: ‘Some things might happen that could have been prevented if you took all of the most oppressive, restrictive and privacy-infringing measures. That is the price you pay to live in a free society.’

One can disagree with civil liberties campaigners and do so honourably. But many of those who would happily restrict our civil liberties are not honourable. So convinced are they of the righteousness of their cause that they will happily accuse privacy campaigners of “aiding terrorists”, often using very emotive and manipulative language.

In responding to these accusations, it is worth recalling the words of journalist and anti-surveillance campaigner Glenn Greenwald:

You could have the most perfect government policy, the perfect calibration of privacy and security, or freedom and security, and still have terrorist attacks. You can not have a society in which absolute safety is the goal, it isn’t achievable and trying to achieve it will create so many worse harms than the failure to have it in the first place.

We allow that all the time. If we see a fatal car accident we don’t start immediately demanding that our government lower the speed limit or change it’s policies; we accept that in exchange for the benefits of having automobiles we’re going to have the risk of death, and sometimes people are going to die, it’s intrinsic to the process, it’s unavoidable and it can’t be solved. We don’t demand that the speed limit be reduced to three miles per hour in order to avoid fatalities. We should be thinking the same way about terrorism.

And so it is with terrorism and freedom. We will never create the perfectly safe society, especially not while the government stubbornly refuses to tackle the contributory factors that lead to Islamist extremism. Instinctively moving to clamp down on our precious civil liberties and grant new powers to the security services is a foolish and fruitless exercise, especially when the intelligence services fail to make use of the reams of data already available to them, as with the Charlie Hebdo attacks in France.

But more than this, it reveals a skewed attitude toward risk. While it is the inalienable right of, say, a nervous flyer to avoid air travel and bear the personal inconvenience of travelling by slower and more dangerous methods because they incorrectly perceive the dangers of flying, it is not the right of government to act in the same immature way when it comes to something so important as national security.

Fortunately, despite the best efforts of the surveillance fanatics, a growing number of people are coming to question the need for and efficacy of mass surveillance. In fact, as demonstrated by a various recent polls in the United States (admittedly a country with a much greater recent tradition of celebrating individual freedoms), an increasing number of Americans are coming to the mature realisation that something not quite tangible but vitally important nonetheless is lost in any tradeoff between citizen privacy and safety under perpetual surveillance: 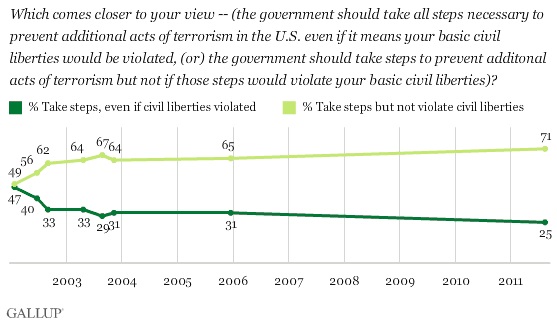 Terrorism is the most heinous form of crime that can be committed against a free society, and those who perpetrate acts of terror against soldiers, law enforcement officers and innocent civilians should always be brought to swift justice.

And yet terrorism is also a price worth paying for liberty. Freedom isn’t free. And the moralising peddlers of faux-outrage who now parade their second-rate consciences by publicly attacking civil liberties groups and trying to shame us into agreeing with them should be ashamed of themselves.

3 thoughts on “Yes, Terrorism Is A Price Worth Paying For Liberty”