Overwrought emotional displays which detract from the music are not new to live performance, but are they becoming more pervasive and insufferable?

In an interesting segment from last night’s Ben Shapiro Show, Shapiro focuses on one stand-out act of celebrity leftist virtue signalling at the recent Grammy Awards in order to riff on performer over-emoting in more general terms.

The specific performance that raised Ben’s ire featured U2’s Bono – an Irishman, it’s worth remembering, not a US citizen – singing in front of the Statue of Liberty, and praising the “shitholes of the world” as the source of America’s greatness, intended as a rebuttal to President Trump’s use of the vulgar phrase in a meeting with members of Congress about immigration.

While looking wistfully at the sky and prancing around in front of the Statue of Liberty, Bono portentously intones into a megaphone:

Blessed are the shithole countries, for they gave us the American Dream.

And to this nonsense, Shapiro responds:

This is something that I also find incredibly annoying and distracting. Of course this kind of preening and prancing has long been connected with music, and performers caring more about how they look and portray their socio-political opinions than how they sound on record is hardly a new phenomenon.

Nineteenth century Romantic pianist and composer Franz Liszt cultivated such a following that it coined a term – “Lizstomania” – where women would fight even over his coffee dregs and discarded cigars. And Lizst himself egged on this behaviour, being one of the first concert pianists to rotate the piano so that he would face the side of the stage at a right-angle to the audience, the better that they could appreciate his dashing profile.

Neither are all of the musicians I admire entirely innocent of this behaviour. Conductor-composer Leonard Bernstein also cut a dashing figure and was famous for the “Lenny leap” where he would sometimes clear a full foot from the podium. Glenn Gould, long my favourite pianist, is almost as well-known for his eccentricities – such as humming as he played, sitting on a battered folding chair when giving concerts and dressing for winter even in the height of summer – as he is for his revelatory interpretations of Bach, Beethoven or Brahms. But in the latter’s defence, many of his defining idiosyncrasies were clearly innate rather than studied, and in fact Glenn Gould had so little time for being a celebrity that he stopped giving concerts altogether at a young age to focus his energies on the recording studio.

British violinist Nigel Kennedy could likewise hardly be described as a staid, boring performer, yet his eccentricities somehow draw one into the performance rather than distracting or repelling the audience or listener. Watch Kennedy break normal concert protocol by addressing this BBC Proms audience immediately before launching into Elgar’s violin concerto and you’ll see what I mean:

But to me there is a definite order of magnitude between the baseline level of emoting that we see in classical music today and the more restrained (on average) approach of even thirty years ago. I confess that as technically brilliant as the likes of superstar pianists Lang Lang or Daniil Trifonov may be, I struggle to watch them because of the on-stage theatrics (in my opinion Yuja Wang does a far better job of being engaging and contemporary without appearing like a cholera patient on a storm-tossed sailboat).

I don’t care if you’re hamming up the rubato while playing some Chopin, there’s no need to lash your head around or make anguished faces as though someone is lurking under the piano pulling out your toenails as you play. But then maybe that’s just because I like my classical musicians the same way I like my journalists and TV news anchors – scruffy and unkempt, too dedicated to their craft to waste time worrying about being a walking shampoo commercial.

Now some of these behaviours and tics – maybe even a majority – can be put down to the understandable exuberance and vanity of youth. But I think a significant minority are inspired by a recognition that being brilliant is not enough unless one also looks and acts the part. And the look and act that audiences increasingly demand and reward is high on emoting, high on dazzling feats of technical brilliance (what Glenn Gould once derisively referred to as “piano-playing” in a self-critique of his earlier work) and lower on the kind of subtlety and introspection which is often needed to bring out the best in even some of the more bombastic repertoire.

And so might it be the case that the real problem with efforts to expand the market for classical music are not the things that usually get traditionalists so worked up – wearing jeans to the opera, mandatory white tie for orchestral musicians, informal lunchtime concerts and so on – but rather the fact that more and more classical performers are adapting to the Age of YouTube by attempting to groan and grimace their way to profundity just like every street busker who sings Lady Gaga’s “Poker Face” at a quarter speed, or Ke$ha’s overwrought performance at this year’s Grammys?

The point of classical music is, unsurprisingly, to convey ideas through the medium of music itself. Of course individual musicians will want to put their own stamp and interpretation on works, either in service of what they believe to be the composer’s original intent or to shed new light on what can sometimes be over-familiar works in the repertoire. But if you frequently find yourself pounding the piano keyboard like you’re playing Whack-A-Mole or sawing away at the violin while grimacing like your appendix just ruptured, you’re probably doing it wrong. The emotion should go through the music and not be lost in the gaudy, inefficient heat exchange of on-stage pantomime.

Performer eccentricities, when unintentional and/or in service of the music, are fine, and sometimes even a blessing. But Ben Shapiro is right; when they detract from the music itself then that can become a problem – in classical music as much as pop music with all the schmaltzy, simplistic political preening of Bono’s preachy Grammy performance. 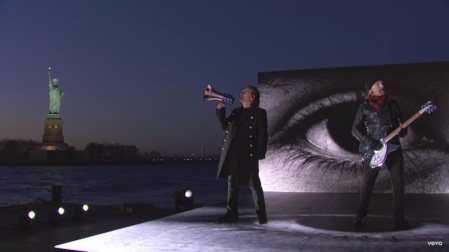