British journalists have reported and commented extensively on the Harvey Weinstein scandal, yet seem curiously unwilling to lift the lid on the seediness and sexual harassment which routinely takes place within their own industry

In the aftermath of the Harvey Weinstein scandal (were you as stunned as I was?!) we have seen a range of responses from genuinely shocking and awful first-hand accounts of serious harassment and abuse to the now-obligatory collective guilt lectures delivered condescendingly to All Men.

But I am particularly interested in the response of journalists and commentators in Britain who took the time to report on a sexual harassment scandal unfolding in Hollywood while remaining curiously silent about a similar culture at work in their own industry.

I make no pretence of being a Westminster insider, but in my life on the far, far outer periphery I have attended a number of political functions, meetings, party conferences, boozy book launches and parties where very high profile journalists and moderately high profile politicians were present, and I have seen behaviour with my own eyes which would shame some of those who lent their voices to the chorus of condemnation of Harvey Weinstein and other serial alleged harassers. I have also heard disturbing personal accounts of inappropriate and unwanted advances by married men in the media, though having been relayed to me in confidence, these are not my stories to tell.

The seediness of Westminster politics is reasonably well known, but while political journalists are generally now willing to report on politicians when they come a cropper, most are understandably much less eager to lift the lid on their own sub-clique. Yet ultimately, journalism is no different from many other professions where people work, travel, eat, rest and play with the same group of colleagues in a high-pressure environment. Throw in the fact that politics and political journalism falls squarely into the “showbusiness for ugly people” category and is dominated by big beasts who grew up in a very different Fleet Street era and young people desperate to get a break, and a pulsating atmosphere of illicit romances, scandals and unwanted advances is all but guaranteed.

I have been to events where wine-sodden journalists said eyebrow-raisingly inappropriate things which made others feel uncomfortable, or in some cases made fumbling physical advances which had to be repeatedly warded off by the unfortunate recipient. Most of these incidents amounted to little more than general slovenliness and lechery, the kind of thing which reflect badly on a person but should not necessarily end a career or put somebody in court. But other times the behaviour I witnessed and heard about fell distinctly into the dodgy end of the grey zone.

And yet so far the only people from the political media world to have faced any kind of scrutiny in Britain are the writers Rupert Myers and Sam Kriss – both of whose cases were summarily tried in the fiery crucible of the Twitter and Facebook Star Chamber with no due process. As happened for so long in Hollywood pre-Weinstein, a couple of relatively minor fish in British political journalism are being made scapegoats so that the Big Fish can swim on unsated, undaunted and unchecked.

Much is being written about the bravery (or lack thereof) exhibited by certain individuals in Hollywood in their dealings with Harvey Weinstein and other powerful men accused of sexual harassment. And many of us probably feel rightful admiration for the brave few who first came forward at considerable personal risk, and shake our heads at the powerful A-listers who didn’t once think to risk anything to warn or protect others.

But I am curious about the household name journalists who behave nearly as badly at SW1 events or party conference hotel ballrooms yet go unreported and unpunished year after year. And I am particularly interested in their media peers, who know exactly what is going on and whether or not it fits a pattern of behaviour, and find all the time in the world to excoriate Harvey Weinstein while saying nothing about the atrocious behaviour that occurs right under their noses.

Tom Bradby, former ITV News political editor and current anchor of News at Ten wrote quite a stirring call-to-arms about an unpleasant “lads culture” at his old rugby club and various stag parties he later attended. Yet after all his years at the top of British political journalism he couldn’t think of any relevant anecdotes about his own peers and colleagues of sufficient concern to make it into the article? Perhaps not; Bradby may very well have purposefully avoided many of the booze-fuelled, bacchanalian evening events which make up the Westminster social calendar, and saw nothing. But I suspect that many others of equal seniority and profile to Bradby know exactly what goes on but give their own industry a Get Out Of Jail Free card.

As anyone who works in politics and answers truthfully will attest, Westminster can be a very seedy place. I understand that the ascension of Jeremy Corbyn in 2015 saw some dispossessed Labour centrists indulge in behaviour which would have been considered scandalous at King Belshazzar’s feast. It seems likely that Theresa May’s bungled campaign and the trauma of election night this summer saw some similar desperation-fuelled behavioural lapses on the Right.

The two mini scandals du jour – Labour’s Clive Lewis getting a bit verbally carried away at a Momentum event in Brighton or Jared O’Mara having posted unsavoury comments on the internet fifteen years ago as a young man  – barely scratch the surface of what goes on. Indeed, these cases are almost decoys, relatively minor transgressions being seized upon so that the accused can be made scapegoats for the graver sins of a much larger group. One almost wonders whether the enthusiasm with which the UK political blogosphere, print and television media picked up these stories was a way of over-compensating for the profound silence about what takes place within their own camp.

But this seediness and sexual harassment within British politics and journalism will not be eradicated by offering up some scrawny, barely-known writer from Vice or a slightly bigger deal from GQ Magazine as a sacrifice to the Twitter gods. It will take a big fish to land a big fish – a heavyweight figure from a major publication or broadcaster must put their credibility on the line. The world of politics and journalism, like Hollywood, is a very hard industry to crack and those struggling to gain admittance from the outside risk everything by speaking out, even as they are the ones predominantly being preyed upon by grotesque, self-satisfied insiders.

One day – perhaps quite soon, given the rapidity with which Harvey Weinstein fell from grace – one of the big beasts of UK political journalism will be revealed for what they are. Somebody who everybody in the Westminster political/media world has been paying obsequious homage to for years will receive first one allegation of improper conduct, then another, and then a steady drip-drip of accusations until the sudden resignation, admission of “errors of judgment” and flight to celebrity rehab inevitably follow.

And when that happens, we will all be sitting here wondering how it was that so many people whose sole job it is to unearth and report stories of public interest – so many respected, well remunerated household names – somehow neglected to mention what was going on in their own back yard.

And what little scrap of credibility the Westminster media retains will be gone for good. 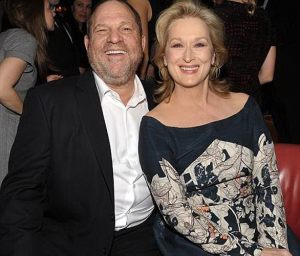 4 thoughts on “Harvey Weinstein Hypocrisy And The Westminster Cesspit”