Great political speeches are only possible when there are great ideas to be expressed, and great leaders to express them

After watching the semi-famous video of former Labour minister Peter Shore arguing passionately against Britain’s membership of the EEC during a 1970s Oxford Union debate, Mark Wallace of Conservative Home has realised that the quality of contemporary British political oratory is perhaps not what it once was.

What’s striking is to try to list the modern speeches by Parliamentarians which have achieved the same quality. I’ve wracked my brains and, frankly, I can’t think of any. To be quite honest, while there are many excellent MPs in today’s House of Commons, I can’t think of a single one who speaks so well. Probably the most famous good speech of recent years was delivered by Hilary Benn, in the Syria debate – but watch it back, and you’ll see that while it was effective, it was done with notes and is still seen as exceptional rather than normal.

Depressingly, most of our Parliamentarians do not seem to prize public speaking. Indeed it’s a fairly regular occurrence to see some of them apparently struggling to convincingly read out loud from a bit of paper. Many are perfectly serviceable speakers, but compare modern performances to those from 40 or 50 years ago and it seems that today’s greats are not as great, the average is somewhat worse than it was, and the worst are now really quite dire.

Indeed. In actual fact, Hilary Benn’s speech on Syria wasn’t particularly good at all – it is memorable mostly because of the dramatic circumstances of its delivery during a period of unrest over Jeremy Corbyn’s leadership of the Labour Party, not the rhetorical exhortations of a man with all the charisma of a Quentin Blake illustration.

People also frequently praise the speeches of leftist politicians such as Mhairi Black (whose maiden speech in the House of Commons went drearily viral all over social media), but these speeches are also not particularly well-constructed or persuasive – they are simply very emotive, which makes them seem good in an age when feelings trump reason and reality TV has diminished our collective capacity to think.

Somewhere along the way, we ceased to value oratorical skill in our politicians. Perhaps it was the decline of the public meeting and the rise of soundbite-dominated TV campaigning that did it. Or maybe the decision not to teach school pupils how to debate left millions unduly intimidated by the idea of even trying to speak in front of an audience. There’s also a suspicion in some quarters that public speaking is somehow inherently elitist – a fallacy, given the many great orators who once arose, largely self-taught, from the union movement in particular, but a self-fulfilling belief, in that if you tell the majority of kids that only the rich and posh do speeches then you run the risk that they will believe you.

This is a clear loss to the character and effectiveness of our politics. How often do we hear people lament that politics is boring, that its main characters are bland, or that they don’t understand what it’s all about? It cannot have helped to have reduced the art and feeling in how we communicate about politics, and abandoned a means to compellingly communicate often complex concepts to mass audiences.

But good political rhetoric does not exist in a vacuum. Contra Mark Wallace and Peggy Noonan, the internet and social media are not a guaranteed friend of good political speechwriting, heralding a coming renaissance in speechifying. While it is true that some political YouTubers are able to gather massive numbers of followers with their witty or acerbic rants, I can’t think of any high profile social media activists who communicate in a genuinely persuasive way.

Case in point: if one looks at the likes of Owen Jones on the hard left or Paul Joseph Watson on the conspiratorial/alt-right (nobody outside the extremes has much of a following), these people are good only at preaching to the converted in order to generate clicks and likes. They will hardly ever cause somebody to reconsider their own deeply held convictions unless a process of personal political transition is already underway. This also applies to the likes of The Young Turks, Steven Crowder, Ben Shapiro and other voices in American politics, some of whom are good, but who tend not to do bipartisan outreach.

No, the art of British political speechwriting can only be revived if there is a simultaneous renaissance in British political thinking. And there are precious few signs of such a revival taking place any time soon. Right now both main parties are pretty much intellectually dead. The Labour centrists, utterly exhausted and discredited after the Blair/Brown years, are finished – and in their place is a holdover from the 1970s in the form of Jeremy Corbyn. Meanwhile, the soft and non-threatening quasi-conservatism of Cameron/Osborne gave way to the statist paternalism of Theresa May, another throwback to the 1970s which can hardly be considered progress.

Nowhere was this dearth of visionary thinking mirrored by equally uninspired rhetoric reflected more clearly than in the EU referendum campaign. This was a highly consequential, even existential political decision for the people of Britain, and yet rather than bold speeches and compelling narratives on either side we were offered little more than glib soundbites and canned catchphrases.

As I wrote at the time:

When the history of Britain’s 2016 EU referendum comes to be written, what will we remember? Of all the particularly dramatic moments in the campaign to date, none of them have been speeches. Sure, sometimes the fact of a speech has been newsworthy, such as when an unexpected establishment figure has been wheeled out to say that Brexit will usher in the apocalypse, but the content – the oratory itself – has rarely raised hairs or stiffened spines.

In fact, proving Eleanor Roosevelt’s famous assertion that great minds discuss ideas, average minds discuss events and small minds discuss people, the media has determinedly reported almost exclusively on the latter two. Of course that is always the temptation for journalists, but our politicians have hardly given the media much to work with on the ideas front, even if they were minded to cover them.

This is a depressing state of affairs. This most important debate should be bringing out the best in our politicians and our media. We should be witnessing a straight-up fight between advocates of the democratic, independent nation state and those who ardently believe in the euro-federalist dream, adjudicated by a press corps  beholden to neither side and always willing to challenge baseless assertions rather than merely provide a “fair and balanced” platform for two partisan idiots to yell at each other for an equal amount of time.

We will not see a revival in political speechmaking in this country until British politicians actually start having ideas and advocating policies worthy of grander rhetoric. So long as there remains in place a technocratic, managerialist consensus between centre-left and centre-right (which very much remains the case and has only been partially broken by Brexit), there will be no bold new ideas in British politics, and in turn there will be no speeches worth listening to.

When even the prime minister of our country sees her role as more of a glorified Comptroller of Public Services than a world leader representing a great and consequential nation, why would we expect her speeches to be any more memorable than the platform announcements at Waterloo station? And if the prime minister’s words are so utterly uninspiring and inconsequential then why bother listening to the words of those who are not even at her level, but merely vying to replace her in that diminished role?

Our current political debates are often petty and parochial, and so are the words we use to fight them. And those issues which might potentially generate bold ideas matched by bold words tend to be furiously ignored by political leaders – look at their refusal to properly confront the Islamist threat, or the staggeringly superficial debate about Brexit.

Great political rhetoric only occurs when there are great issues at stake and great minds willing and able to tackle them. Think of Franklin Delano Roosevelt’s “The only thing we have to fear is fear itself“, delivered as the American economy buckled under the Great Depression. John F. Kennedy’s “We choose to go to the moon” speech at Rice University, setting the United States the ambitious goal of landing a man on the moon and returning him safely to earth. Winston Churchill’s “We shall fight on the beaches“, given after Britain’s deliverance at Dunkirk. Ronald Reagan’s “Tear down this wall“, made at the Brandenburg Gate in Berlin (and ironically helping to usher in the post-Cold War world which for all its wonders also sucked much of the vitality from Western politics, together with our raison d’être).

And maybe part of the reason that there are no great contemporary British political speeches reflects our diminished status in the world, no longer a superpower or the pre-eminent actor in world affairs. Lofty words are easier to reach for when one reasonably expects that they might reshape the world. Perhaps this is why American political oratory has undergone a similar decline in the post-Reagan era, now that Pax Americana is drawing to an end and the uncertain new multipolar world emerges.

But one thing is certain: without conviction politics, there can be no speeches of great conviction. At best, a centrist or technocratic politician might be able to mimic the grandeur and cadences of famous speeches – as President Obama did so effectively, talking loftily of hope and change while a very different reality played out on the ground – but they will never truly achieve that perfect synergy of subject, argument and tone that is the hallmark of a great speech.

Why are there no great contemporary British political speeches? Well, try picturing one in your head, given the kind of issues we typically argue about and the politicians who represent us.

Imagine schoolchildren memorising the words to that famous speech opposing HS2 or supporting the renationalisation of Southern Rail.

Picture a crowd of thousands of people brought to its feet in genuine excitement by a pledge to reduce NHS waiting times by 15 percent in the next parliament, hire a few hundred more nurses or increase the minimum wage to an astronomic £8 an hour by the year 2020.

And there’s your answer. 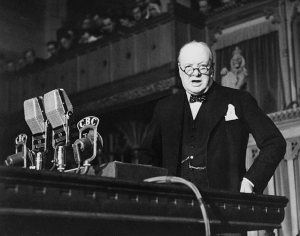 8 thoughts on “Like, Why Can’t British Politicians Talk Fancy No More?”