I wanted to write one last great exhortation encouraging people to vote Leave today – a grand summary bringing together all of the compelling reason to reject the miserabilist, pessimistic, soul-sickeningly unambitious case put forward by the Remain campaign and embrace instead the possibility of real democratic renewal which can only come about with a Leave vote.

But someone has already made the closing argument much better than I ever could. And they did so before I was even born, in 1975 at the time of our last referendum on whether to remain part of the European Economic Community.

If you read this blog, you already know my thoughts on the EU referendum. And if you follow the work of The Leave Alliance you know the type of Brexiteer that I am.I will not restate all of these arguments now. I will leave you instead with the words of the late Peter Shore MP, a man whose politics could hardly be more different to my own, but whose understanding of and commitment to British democracy is second to none.

Speaking at a 1975 EU referendum debate at the Oxford Union, Peter Shore MP concluded his remarks with this devastating critique of Britain’s accession negotiation – all of which can be applied to David Cameron’s failed renegotiation – followed by a stirring rejection of the EU’s antidemocratic, supranational form of government in general:

I say to you this is not a treaty which in any way is a fair and equal treaty. It was not negotiated, it was accepted. Not one word, not a comma, let alone a clause, let alone a paragraph of the Rome Treaty – not one comma has been altered in order to meet the perfectly legitimate and serious differences that exist between Britain and the Common Market.

And now the experience itself – three and a half years ago, when they were urging us to go in. Oh, what a campaign it was. “You’ve got to get in to get on” was the slogan of that day. Five or six pounds a week better off for Britain, if we could only get in to the common market. All the goodies were read out – Donald Stokes of Leyland buying one-page advertisements saying all we need is a great domestic market of 250 million, and we will sweep Europe!

[..] When you add to that the burdens I mentioned a moment ago, and we are under great threat, we are in peril at the present time, and the country must know it.

Fear because you won’t have any food. Fear of unemployment. Fear that we’ve somehow been so reduced as a country that we can no longer, as it were, totter about in the world independent as a nation. And a constant attrition of our morale, a constant attempt to tell us that what we have – and what we have is not only our own achievement but what generations of Englishmen have helped us to achieve – is not worth a damn, the kind of laughter that greeted the early references that I made that what was involved was the transfer of the whole of our democratic system to others. Not a damn.

Well I tell you what we now have to face in Britain, what the whole argument is about now that the fraud and the promise has been exposed. What it’s about is basically the morale and the self-confidence of our people. We can shape our future. We are 55 million people. If you look around the world today – I listened to Gough Whitlam and his 14 million Australians, and he trades heavily with Japan, I’m very fond of the Australians – but do you think he’s going to enter into a relationship with Japan where he gives Japan the right to make the laws in Australia? Do you think Canada, 22 million of them, and to the south a great and friendly nation, yes they are, but do you think Canada is going to allow its laws to be written by the 200 million people in some union in America? No, no, of course not. The whole thing is an absurdity.

All of this beautiful prose – a relic from a bygone age when political speeches didn’t make one want to jump out of the window to escape the boredom – was delivered while a stony-faced Edward Heath looked on, chastened.

God willing, today we will have the opportunity to chasten our current prime minister David Cameron – a man who has conducted himself in many ways like a lame Ted Heath tribute act – by ignoring his pro-EU campaign of lies, distortions and intimidation.

I can say no better than Peter Shore. But please – if you have not already done so, go to your polling station and vote for democracy, vote for Britain, vote to leave the European Union. 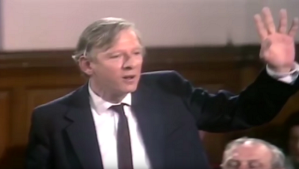