The vote for Brexit and Donald Trump’s presidential election victory seems to have wrongly convinced an entire army of snarling, leftist authoritarians that they are actually the virtuous defenders of liberalism

Is anybody else getting mighty sick of the constant parade of left-wing, Big Government-supporting authoritarians suddenly rushing to cloak themselves in the veil of “liberalism” as they struggle to process what they see as successive defeats in the EU referendum and the US presidential election?

I can’t think of a word that has been more overused by pundits since everybody got together a couple of years ago and decided that the related N-word (neoliberalism) was this season’s hottest fashion statement, and started accusing everybody whose views they dislike of being an Evil Neoliberal, as though it were some devastatingly intellectual insult.

Here’s the FT, weeping into their cornflakes about the supposed death-throes of liberalism:

Mr Trump’s victory, coming after the Brexit referendum vote in Britain, looks like another grievous blow to the liberal international order. Mr Trump must decide, by his actions and words, whether he intends to contribute to the great unravelling, at incalculable cost to the west.

Democracy is changing, and not for the better, but those who believe in liberal values, tolerance and protecting the environment can learn from this setback and fight back.

The Independent, of course, promotes liberal tolerance through its courteous and magnanimous treatment of those who dare to dissent from its positions on social issues, climate change and global governance.

In her concession speech, Clinton said her goal had been ‘breaking down all the barriers that hold any American back from achieving their dreams‘. This is the dream of liberalism, which seeks freedom from any social or economic constraint. Elites like Clinton feel confident that they can navigate a deregulated society in which class, gender, and race are all fluid. They support deregulated markets as well, confident that free trade and open borders will serve their own interests in the near term and the whole country’s in the longer term.

Freedom from any social constraint? Only if one happens to agree with the elite.

And the Spectator again, covering itself in even more glory:

The challenge to liberalism is still seen as an argument to be won rather than an irreversible sea-change. But, if anything, the scale of the problem has been understated. The core tenets of liberalism are freedom and equality, ideas that are under siege.

Oh, and let’s not forget the prime minister herself, Theresa May, speaking at the Lord Mayor’s banquet on Monday evening:

Change is in the air. And when people demand change, it is the job of politicians to respond.

But it’s also the job of all those in positions of influence and power – politicians, business leaders and others – to understand the drivers of that demand too.

And I think that if we take a step back and look at the world around us, one of the most important drivers becomes clear – the forces of liberalism and globalisation which have held sway in Britain, America and across the Western world for years have left too many people behind.

Let’s be clear: those forces have had – and continue to have – an overwhelmingly positive impact on our world.

It really has come to something quite strange when Theresa May – a flinty eyed authoritarian who gives me pause any time I check a book out of the library, lest her government use my borrowing history as a pretext for throwing me in jail next week – seeks to wrap herself in the mantle of small-L liberalism.

But now everyone seems to be at it, suddenly claiming that they are terribly “liberal” while the people they dislike are not. Politicians and pundits who only months ago could be found calling for people to be banned from entering the country due to their political beliefs are now rending their garments at the election of a man who suggested that people should be banned because of their religious ones. And in so doing, they declare themselves to be the defenders of liberalism, while utterly oblivious to the irony of it all.

People who wanted to usher in national ID cards, strengthen the surveillance state, extend pre-charge detention, ban UKIP voters from fostering or adopting children, throw people in jail for their Facebook and Twitter posts, arrest people for singing the wrong songs at a football match, ban advertisements for being offensive, hike taxes even higher on cigarettes or alcohol or ban them altogether, levy regressive taxes on soft drinks, erect safe spaces on university campuses, slap trigger warnings on academic syllabuses, shame or punish people for the Halloween costumes that they choose to wear, get people fired from their jobs for holding or expressing the wrong opinion, strangle religious freedom and force people to violate their faiths by positively affirming the actions and lifestyle choices of others – these people are suddenly all over the airwaves, lamenting that it is actually those Evil Brexiteers and Donald Trump supporters who have supposedly brought our previously-idyllic liberal age crashing down in flames.

Well sorry, but this pious, self-aggrandising argument is complete baloney. I can’t speak for Donald Trump supporters, not being one myself, but I am very adamant that my vote for Brexit was a liberal vote for strong, globally-engaged nation state democracy. I and millions of others voted to leave the European Union because it sought to impose a degree of supranational government upon us which far outweighs the limited extent to which most Britons consider themselves European and consent to such governance. I did so because I judged that my inalienable rights to life, liberty and the pursuit of happiness are to this day best defended by a strong nation state with a reinvigorated national democracy, and not a remote supranational union with some of the superficial trappings – but none of the spirit – of democratic accountability. Voting for Brexit was perhaps the most profoundly liberal thing I have done on my thirty-three years on this good Earth.

And yet now I am supposed to sit back while every two-bit authoritarian with a newspaper column publishes tedious identikit dirges alleging that I, a staunch libertarian conservative, am supposedly at the vanguard of a dystopian new illiberal movement sweeping across the world and shrouding humanity in darkness and uncertainty? Hell no.

If liberalism is so great – and by and large, it is – then it would be nice if some of liberalism’s new fair-weather friends tried to remember the ideology’s core principles once they have finished weeping about Trump and Brexit and turned their attention back to more mundane political events. Perhaps they might care to remember the term they so glibly appropriated next time they call for something they disagree with to be banned, or for somebody who offends them to be punished by the criminal justice system. What do you think are the chances that this will happen?

After a week of this incessant, tedious refrain about the “death of liberalism” from the commentariat, I have just about had enough of my liberalism being culturally appropriated by the snarlingly authoritarian Regressive Left. It is only in the reflection of Donald Trump or Nigel Farage’s wildest rhetoric that their own paternalistic, control-freakish, coercive instincts can be even semi-plausibly pitched as being remotely liberal, and those of us with long memories and functioning brains know these pearl-clutchers for what they really are – persistent, deadly enemies to true liberalism.

Postscript: In this excellent piece, Pete North slaps down the idea that the West is somehow turning its back on liberalism, drawing a crucial distinction between genuine small-L liberalism which is as popular as ever and its decadent, identity politics and victimhood culture-infused cousin which has indeed been rejected by the electorate.

In a liberal society we appreciate that we all have our distinctions and limitations and we recognise that nobody should endure discrimination or punishment for those facets which cannot be changed. Gender, sexual preference, skin colour. But it goes further than that. We try to open doors for people os that people can break out of predetermined roles and destinies. That to me is social progress, where nobody is limited by class and physical attributes.

But when liberals begin to attack the very foundation of our morality and our values and seek to replace them with an ultra-permissive, anything goes morality we lose any kind of cohesion and moral authority. Moral relativism takes hold to such an extent that we can no longer defend those things we value.

What the left have done is to identify all social norms as inherently evil – which has given rise to the cult of the self which in turn has spawned the now toxic brand of feminism we see on the internet and the perverse social justice movement which processes everything through the prism of identity. It centres around a certain narcissism whereby individual rights become entitlements on the basis of one’s sense of victimhood. From this is born the right not to be offended or triggered – and with that goes the death of free speech. Opposition is inherently oppression it seems.

And this is why the culture war of the last decade goes so heavily with what is happening on a more visible level in politics. In what is now seen as a backlash against political correctness, there is something more seismic happening.

But then this tyranny of what is laughingly known as progressivism is on borrowed time. It always was a moral and intellectual perversion and it was always a minority view. How it came to be one of the most powerful ideas of a century is for the historians but now it seems the majority have finally lost patience and stood up to the left. In this we are not turning our backs on liberalism. We are merely putting an end to the gradual erosion of those, dare I say it, traditional values on which our modern and open society is built. I think this is what makes Theresa May, herself a church and shires Conservative, the right lady at the right time.

The sad part of this is that there will inevitably be a tiny minority who think we are going back to the old days where rampant and open homophobia is acceptable and we will no doubt see an unfortunate spike in racist incidents. But it is a typical left wing lie to say that mainstream society has suddenly become intolerant and racist. That trick might have worked for the last twenty years but the election of Trump tells you that the majority no longer care what you call them. The more offensive to the left the better.

And it is so telling that across the USA we now see the left spitting venom. We now see the true face of the “tolerant” left in all its bile. We can see that it was never about advancing a better society for all. It was about the minority wielding power over the majority – to impose a twisted morality on society without its consent – from the United Nations to the local primary school.

I repeat: genuine, small-L liberalism has not been rejected by the people, and is only under marginally more serious threat from ignorant authoritarians like Donald Trump than it has been over the past decades from highly learned progressives who sought to impose their “progressive” worldview on an uncertain population while actively criminalising dissent.

Those weeping most loudly today about the supposed death of liberalism have often themselves done as much as anyone to damage liberalism themselves through their decidedly illiberal and intolerant past behaviour. 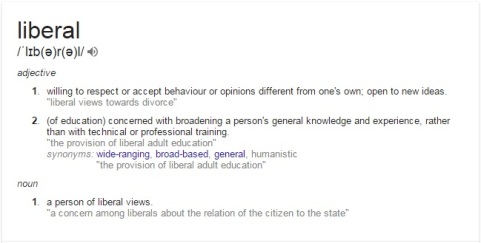