The warped philosophy of social justice decrees that good parents are part of the problem, not the solution

For more evidence of the sickness at the heart of our universities, I present the professor from Warwick University – my alma mater – who thinks that parents who read to their children are gifting them with unfair privilege over other kids whose parents are too busy watching Britain’s Celebrity Animals Bake-Off On Ice to lavish their own children with similar attention.

From the ABC summary of the segment on Australian radio:

[Professor Adam] Swift in particular has been conflicted for some time over the curious situation that arises when a parent wants to do the best for her child but in the process makes the playing field for others even more lopsided.

‘I had done some work on social mobility and the evidence is overwhelmingly that the reason why children born to different families have very different chances in life is because of what happens in those families.’

Once he got thinking, Swift could see that the issue stretches well beyond the fact that some families can afford private schooling, nannies, tutors, and houses in good suburbs. Functional family interactions—from going to the cricket to reading bedtime stories—form a largely unseen but palpable fault line between families. The consequence is a gap in social mobility and equality that can last for generations.

Already this sounds ominous. And though Swift gets his mention of “equality of opportunity” in nice and early, the draconian means by which he wants to achieve this equality are quite something to behold:

The test they devised was based on what they term ‘familial relationship goods’; those unique and identifiable things that arise within the family unit and contribute to the flourishing of family members.

For Swift, there’s one particular choice that fails the test.

‘Private schooling cannot be justified by appeal to these familial relationship goods,’ he says. ‘It’s just not the case that in order for a family to realise these intimate, loving, authoritative, affectionate, love-based relationships you need to be able to send your child to an elite private school.’

Note what Swift has done here. First of all, he posits a dystopian world where “we” have any right to “allow” parents to do certain things or raise their children in certain ways, the corollary to which is that these mystical external authority figures also have the power to prohibit parents from engaging in certain everyday activities.

But worse, he has made an arbitrary judgement with relationship to these “familial relationship goods”. You might think that it is up to individual parents and families to decide what is good for their young ones, or what is most needed to ensure that they thrive and become well-rounded, successful people. But you would be wrong. Because Adam Swift has a definitive list of all the things needed to create a well-behaved, social justice loving adult, and private schooling ain’t on the list.

And that’s when it gets really crazy:

This devilish twist of evidence surely leads to a further conclusion—that perhaps in the interests of levelling the playing field, bedtime stories should also be restricted. In Swift’s mind this is where the evaluation of familial relationship goods goes up a notch.

‘You have to allow parents to engage in bedtime stories activities, in fact we encourage them because those are the kinds of interactions between parents and children that do indeed foster and produce these [desired] familial relationship goods.’

How gracious of Swift, allowing parents to continue to read to their children at bedtime, even though the unfair privilege they bestow by doing so eats away at his enlightened, equality-loving soul.

‘We could prevent elite private schooling without any real hit to healthy family relationships, whereas if we say that you can’t read bedtime stories to your kids because it’s not fair that some kids get them and others don’t, then that would be too big a hit at the core of family life.’

So should parents snuggling up for one last story before lights out be even a little concerned about the advantage they might be conferring?

‘I don’t think parents reading their children bedtime stories should constantly have in their minds the way that they are unfairly disadvantaging other people’s children, but I think they should have that thought occasionally,’ quips Swift.

So by all means continue to read to your children, if you must. But you should feel very guilty while you do so, and chastise yourself once little Timmy has fallen asleep, while meditating on the various ways he will grow up to oppress those unfortunate children whose parents did not read to them.

Which, of course, is the one thing missing from Adam Swift’s “analysis” – any thought or mention of the parents who do not read to their children. As with everything else in the victimhood-soaked world of social justice, where everything must be viewed through a lens of privilege and oppression, only those who work hard and do the right thing are subject to criticism. Those who do the wrong thing, by contrast, are continually excused and stripped of any agency for their own actions – a condescending behaviour which actually does more to dehumanise them than any “harm” they incur from the privileged.

In the entire segment, Swift has no words of reproach for those parents who do not read to their children at bedtime. He neither suggests that this might be through their own fault, or that they need to anything to rectify the situation. It is simply taken as a given that they will continue to be bad parents, helpless to modify their behaviour, and that the only thing society can do in response is to worsen the overall standard of parenting in order to prevent the worst parents from feeling bad or experiencing the consequences of their own actions.

And this, right here, is at the root of our society’s decay. We now simply accept and nod our heads while academics airily consider how best to bring everyone down to the same, lower level of attainment rather than striving to confer as many of the benefits currently enjoyed by the rich (or those with good parents) on all. The insidious Cult of Social Justice and Identity Politics has done its work well, because many of us now look at inequality and feel the instinct to tear the successful down (or at least actively thwart their rise) rather than building others up.

Fortunately, Adam Swift is not about to be given wide-ranging power over how people raise their children. But it is worth noting the type of outcomes which one might get when beady-eyed authoritarianism (where external authority figures “allow” graciously parents to do things) meets the warped Social Justice view of inequality.

For so long as these ideas remain abstract discussions between philosophers, there is limited real-world harm. But when more young people who have percolated in this environment all through university start entering the job market and getting themselves elected to local and national government, we will have a real problem on our hands.

In Britain, the Labour Party is already very hostile to the idea of private schools, while many in the Conservative Party are themselves quite paternalistic and keen for the state to regulate behaviour. And while neither party has not yet succeeded in shoehorning government fully into the parent-child relationship (except for Scotland, where the SNP is making a game attempt at taking over from parents), it may well be only a matter of time. 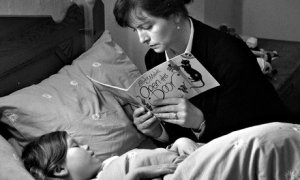