Too often, left-wing activism is about making the activists and supporters involved feel good about themselves rather than advocating for policies which might actually help the people for whom they claim to speak

Watch this short, 30 second video. It perfectly sums up everything that is wrong with much of the modern Left in Britain and America.

The footage shows young, left-wing activists descending upon a Taco Bell fast foot restaurant in Austin, Texas, to encourage the mostly minimum-wage workers to go on strike as part of their “Fight for 15” campaign to raise the federal minimum wage to $15 per hour.

Suffice it to say that their intrusion is not appreciated by the staff of the restaurant, who react to having their difficult job made harder by the presence of young do-gooder activists by curtly asking them to leave.

The exchange goes as follows:

Activist: —- our first day of action, which we’re —

Worker: This is also a job that I am trying to do, and y’all are hindering my work.

Worker: You may leave the building.

Activist: [aggrieved] We just wanted to let you know that if you’d like to come out on strike, your action is protected by the federal government to go on strike for fifteen dollars an hour and better conditions on the job. Now, have a wonderful day, thank you so much.

Sadly, this sums up the net result of much left-wing activism, from the Fight for 15 campaign in the United States to yesterday’s unsung anti-austerity march in London.

This is what one of the London demonstrators had to say when asked why he was marching against David Cameron’s Conservative government:

Austerity is a political choice, not an economic necessity. We need to mobilise people against neoliberalism, which is the ideology driving this government.
Everything I like about this country is under threat: the NHS, state schooling, a decent provision for the weakest and most vulnerable, and much more. Injustice enrages me: I feel I must stand up against it.

Quick, get that superhero some tights and a cape! “Injustice enrages me”? Puh-leaze. This is virtue-signalling of the highest order, one man’s glitzy attempt to use the austerity myth to demonstrate how much more of an enlightened, compassionate person he is than those Evil Tories who operate on the scandalous basis that the state should not be an auxiliary parent or banker of first resort to its citizens.

And so it is with the Fight for 15 activists in America, as well as those who believe that George Osborne’s (already misguided) national living wage is not high enough, and that the minimum wage should be hiked even further.

Never mind all of the evidence which shows that creating and then incessantly hiking a minimum wage simply renders those people whose skills and value-adding capability are not worth the new wage effectively unemployable. Never mind that this great exercise in conspicuous compassion actually dooms people to long-term unemployment. Never mind all of that, because walking around with placards demanding higher wages for poor people makes young left-wing activists (and some older activists who should know better) look good to their friends.

And so it is with issue after issue. Unlimited immigration from those eastern European countries which joined the EU in 2014? The Left sang stirring hymns to multiculturalism while their compatriots at the bottom end of the UK labour market experienced far greater competition and wage stagnation as a direct consequence. But does the modern, middle-class Left care about those suffering working class communities? Of course not – unless they contain an imperilled steelworks, that is, in which case they will feign an interest for so long as it makes a good anti-Tory photo op. Otherwise most of them couldn’t care less.

Young lefty hipsters get to experience all of the positives of immigration, like being able to get their London flats cleaned for £10 an hour at the swipe of an iPhone (yes, I do it too), and to hell with those at the sharp end. Worse still, the modern Left have spent the last decade screaming “racism!” at anybody who dares to utter a different viewpoint on immigration, including many of their own working-class “comrades” who either defected to UKIP or sat at home in last year’s general election. And even now they can only bring themselves to show sympathy for exploited immigrants, but not for the local working classes whose wages and conditions were negatively impacted. 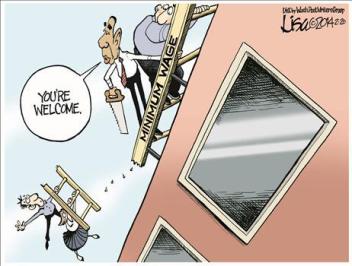 Brendan O’Neill calls them the middle-class clerisy. Many others would probably call them something far worse. But in any case, this current generation of left-wing campaigners show a remarkable aptitude for broadcasting their own right-on, progressive credentials but much less concern for formulating and then advocating policies which actually help the jobless, the low-paid or their other “pet projects”.

Which brings us back to the unedifying spectacle of twenty or so young, idealistic but not very bright left-wing activists bursting into fast food restaurant and urging the harried workers inside to put down the burger flippers and join in their glorious revolution. How incredibly patronising.

These activists, who think they understand economics because they have seen a few Bernie Sanders speeches on YouTube (or attended one of John McDonnell’s “New Economics” lectures in Britain) are behaving as though they are the enlightened saviours of the oppressed working classes, who lack the intelligence and agency to take action on their own. I have worked a few minimum wage jobs in my youth, and if some self-aggrandising students had burst into my workplace telling me to strike, tried to “organise” me and presumed to act on my behalf I would have sent them straight out of the third floor window, never mind the door.

Minimum wage jobs are a valuable first rung on the career ladder for many people, particularly young people with fewer marketable skills, those still living at home or those providing a second income to a household. Hiking the minimum or living wage will give a marginal benefit to some of these people at the expense of putting others out of work entirely. Some of the Taco Bell workers in that video would likely lose their jobs as a consequence – even if their jobs survived the initial hike, they could easily fall victim to the next wave of automation now coming to the fast food industry (as wage costs increase, firms will look to substitute technology for humans wherever possible).

Many of the workers in that Taco Bell restaurant could probably have told the young demonstrators some of these things, if only they had bothered to ask them (or speak to others in their position) before charging in on their white horses to save the day. But they didn’t. They already know what is best for fast food workers, just like sanctimonious British leftists knew that immigration was an unambiguously Good Thing back in 2004.

And since left-wing policymakers and their army of activists have already done the thinking and come up with the solution, the role of the low-paid worker is simply  to sit back and thank these enlightened, compassionate souls for coming to their aid as they  make everything wonderful. God forbid they formulate or express any ideas of their own, especially if those ideas are contrary to the narrative prepared for them by Labour or the Democratic Party.

Who are these impertinent Taco Bell workers to tell the Fight for 15 campaigners to leave their restaurant, anyway? Don’t they know how lucky they are to have these young, middle class people fighting their corner? After all, they’re just lowly fast food employees. 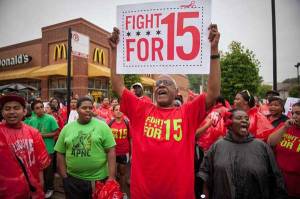