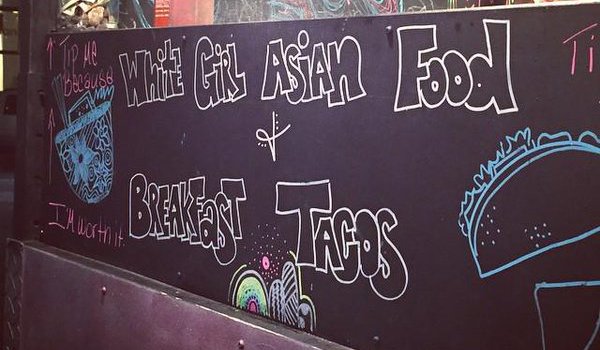 Identity politics zealots will not rest until they control the thoughts, as well as the behaviour, of everyone else

Taking a break from writing something more serious on the subject of identity politics (watch this space), I spent some time today amusing myself by reading some of the apoplectic reactions to the White Girl Asian Food truck in Austin, Texas.

Some of the sentiments expressed were hateful and vile, while others tended towards hand-wringing incredulity.

This blogger has trouble balancing her desire to praise a female entrepreneur with her clear uneasiness at the “cultural appropriation” at work:

On one hand, I’m glad it doesn’t claim to be authentic Asian food. According to an interview with Vice, she changed the name of the food truck from “Com Bun Yeu” to “White Girl Asian Food,” so people would stop assuming she sells authentic Vietnamese food. Her goal was to make it clear that she was “a white girl cooking [her] rendition of Asian cuisine [and she] couldn’t think of a name that was more honest and straight to the point” than “White Girl Asian Food.”

I also respect her and her family for leaving their home and living out their dreams of owning food trailers – that takes a lot of guts. It’s also amazing that she’s part of the 26% of female-owned food establishments. You go, girl.

But, on the other hand, I’m irritated that she combines the bare bones of a few cuisines and shuffles them under the umbrella of Asian food. There will be people who eat at this food truck and assume this is what Asian food is all about when this is a false representation of an extraordinarily broad cuisine.

At the end of the day, I think the food truck should stay if it receives a large helping of cultural humility. But changing its name (again), in English and Vietnamese, to better represent the food served would be a great next step.

This is certainly one of the more measured responses, but still it reveals everything which is ultimately wrong (and doomed to create more problems than it solves) about the broader identity politics movement.

At one point, the author – Jocelyn Hsu from UC Berkeley – frets that “there will be people who eat at this food truck and assume this is what Asian food is all about.”

So what? Every day there are people who eat at places like Wagamama or P.F. Chang’s and lazily believe that they are having an authentic culinary experience. They happen to be wrong (not that there is anything wrong with P.F. Chang’s – I would pay good money if they opened a restaurant here in London), but their misapprehension in no way impacts on anybody else.

At most, one could argue that by splashing around in the paddling pool of more Westernised interpretations of Asian cuisine they are denying themselves the opportunity to experience the authentic food of another culture. But even if this is so, the cultural appropriation police are still light years away from establishing a link between one person’s ignorance and another person’s harm.

In his epic debates against the religiously inclined, the late Christopher Hitchens would often say that even accepting the deist view that there is a God, the faithful still have all their work ahead of them in order to prove that God has indeed revealed himself to mankind, and that certain chosen people have been favoured with knowledge of God’s nature and detailed commandments for how we should live our lives. Similarly, even accepting the idea that cultural ignorance harms the culturally ignorant, the identity politics cultists of today still have all their work ahead of them to prove that a white American’s assumption that chop suey is a commonly eaten dish in China in any way harms Chinese or Asian American people.

Unless, that is, one believes that minority groups can be harmed by even the unexpressed thoughts and beliefs of another person. If you believe that it is possible to inflict grave harm merely by misunderstanding the cultural history and “lived experience” of another identity group in your own head, then the anger and paranoia start to make more sense.

And of course this is exactly what the cultural appropriation protesters do believe. To them, it is not enough for other people to think their own private thoughts unmolested, facing criticism only when they commit an act of overt prejudice. Rather, all unknowing heretics must be badgered into thinking the “correct” thing, even if they were not themselves spreading misinformation.

By applying this extremely high standard for cultural awareness, minority groups will not stop incurring real harm until every last septuagenarian in Des Moines understands that the Panda Express drive-thru they visit every Thursday lunchtime is in fact not typical Szechuan cuisine.

There may be an academic term to describe this frantic need to control and tweak the thoughts of other people, though I have not yet come across such a phrase in my reading of Haidt, Haslam, Campbell or Manning.

But I would call it a plain old inferiority complex – and a quite unnecessary one at that, for every cuisine and culture possesses its own inherent value, cannot be “invalidated” by the ignorance or even derision of others, and does not require the full understanding and approval of white America in order to exist.

There should be room on this Earth (and in America) for the White Girl Asian Food truck and authentic Asian cuisines to peacefully coexist. Ironically, the only ones arguing otherwise are the people who march under the banner of tolerance.