Few politicians will dare to criticise today’s breed of authoritarian student activists – because odious and illiberal as their worldview undoubtedly is, both main political parties have something to gain from regulating our behaviour and speech

Yesterday, I went on the BBC Daily Politics to talk about the creeping tide of campus illiberalism and the tyranny of modern student activists who seek to turn their universities into fuzzy, unthreatening places where intellectual debate and reason are secondary to making people feel accepted and validated at all times.

The debate was framed around the question of whether Britain should consider raising the voting age, given the fact that so many student activists recoil from free speech and the boisterous exchange of ideas, preferring to cloister themselves in ideologically homogeneous “safe spaces” while viciously lashing out at anybody who dares to hold different ideas.

I had written a blog post back in November, following up on Glenn Reynolds’ (of Instapundit) column suggesting in the wake of the Yale and Mizzou controversies that if students could not tolerate hearing contradictory ideas, they had no business voting and participating in democracy. I think a lot of the points that Reynolds made were very strong, though I also agree with what he said when he walked back his statement the next week.

I was surprised to get the call from the BBC, but I thought it was worth accepting the invitation to push the broader message – not that we should go around banning groups of people from voting just because they wind us up, but that this insidious culture of identity, grievance and therapy, incubated in our universities and ignored for too long by the media, is going to have profound consequences for our society and our democracy as these people grow up and join the electorate.

The Daily Politics’ Soapbox feature is good for what it is, but when it comes to laying out a new and complex argument full of nuance and detail, there are obvious shortcomings. You get a two-minute video (which I filmed in Oxford, with particular thanks to the Oxford Union and its president) to make a brief pitch, but that pitch can only be around 200 words, the rest of the time being given to music and establishing shots. And then there is the live segment, broadcast after Prime Minister’s Questions, where you get to debate with Jo Coburn, Andrew Neil and the panel.

The video is shown at the top of this piece, and you can judge the results for yourself. I’m reasonably pleased with how it went, but also frustrated that we could only skim the surface of what is an important and fascinating issue – one with potentially profound consequences for education, free speech and democracy.

Notably, the two MPs on the panel that day – Ed Vaizey and Kate Green – didn’t want to delve into the real issue at all, choosing to get hung up on the specifics of the voting age element. Green in particular was in denial about there being any kind of problem, saying that she didn’t think it was a “new thing” and that “there have always been controversies in our universities”.

But Green then goes on to say “I think it is part of exploring boundaries and debating ideas and issues”.

No. This is precisely the problem. By high-handedly declaring that they speak for all students and elevating their personal feelings over any question of objectivity, truth or legitimate debate, these student activists – the New Age Censors – are specifically crushing the debate of ideas and issues, not just for themselves but for everyone so unfortunate as to be studying with them.

Kate Green tries to make the new academic dystopia of safe space rooms, trigger warnings on texts and campus speech codes something that is natural and commendable, part of exploring boundaries. But it is no such thing. At the time of the Yale controversy, the student (Jerelyn Luther) who had a full-on toddler’s meltdown over a harmless email about Halloween costumes raged:

So universities are not to be places of learning and intellectual debate any longer. Or if they are, this mission is very much secondary to the far more important task of making students feel comfortable and validated in whatever “identity” they happen to have assumed on that particular day.

This is what we are dealing with, and this is what neither Ed Vaizey or Kate Green wanted to grapple with. Of course, both have their reasons.

I was essentially describing a group of wobbly-lipped, permanently “vulnerable” perpetual victims who are in constant need of a strong authority presence to smite their enemies and protect them from emotional harm – in other words, I just described the current Labour Party’s ideal (if not yet typical) voter. No wonder Kate Green couldn’t bring herself to engage with the substance of my argument – to do so would be to alienate the very people whom Labour has been reaching out to since the Gordon Brown era.

And what could Ed Vaizey say in support of free speech and against its rapid erosion on university campuses across the country? His leader, David Cameron, flew to Paris after the Charlie Hebdo attacks and walked arm-in-arm with some of the world’s most brutal and repressive leaders in defence of “free speech”, while people continue to languish in British prisons, locked up simply for saying, singing or tweeting something that another person found “offensive”. The present Coke Zero Conservative government doesn’t look on these petty authoritarian students as a problem – it admires their attempts to ban speech and regulate freedom of expression.

I should be clear that not all students – not even most students – are like the petty little tyrants in the headlines today. Spiked’s Tom Slater makes this point forcefully:

If there’s one thing that really gets on my nerves, it’s the idea that students today are uniquely intolerant. The explosion of campus censorship in recent years has made bashing campus politicos a kind of commentariat pastime, with fortysomething columnists wheeling the little blue-haired pillocks out each week to give them a good kicking. But while the students’ union censors deserve everything they get, all too often campus censorship has been painted as a generational phenomenon – as if undergraduates appeared from the womb with a Safe Space policy in hand.

I quite agree. And my one regret is that there was no time in my fleeting moment on the Daily Politics to explore the context in which these little campus tyrants are growing up, and what has made them the way they are. As Tom Slater, Brendan O’Neill, myself and a few others have pointed out, many of those “fortysomething” columnists and academics now criticising the student activists are themselves guilty of supporting the hate speech laws and therapy culture which have taught the New Age Censors that “sticks and stones may break their bones, but words will kill them stone dead”.

That being said, I think it was still a useful opportunity to raise an important issue and maybe raise awareness among a wider group of people, many of whom haven’t set foot on a university campus in years and would be horrified to discover the kind of illiberal dystopia that they have become in the name of “tolerance” and “inclusivity”.

But as Spiked is now doing, we all should give particular praise and encouragement to those few students – like George Lawlor from the University of Warwick – who have been brave enough to stand against against these illiberal trends on campus.

This fight will not be won in the television studios of Westminster or the columns of national newspapers. It is the brave students withstanding huge social pressures and even physical intimidation to take a stand for liberty and free speech on their own university campuses who must do the real fighting, as well as those professors and administrators with sufficient backbone to stand up to the shrill demands of the Safe Space Lobby.

But the rest of us should provide what air cover we can, as this blog has consistently done – and will continue to do going forward. 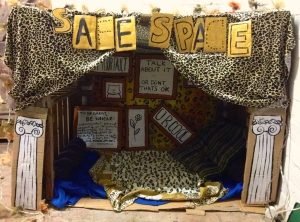