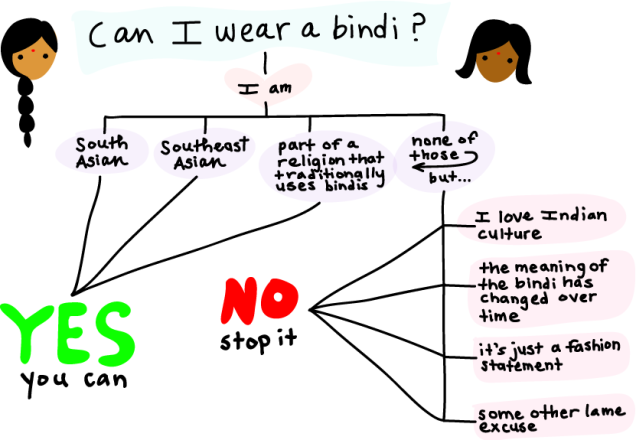 Today’s virtue-signalling, totalitarian student activists will stop at nothing to let everyone know just how enlightened and considerate they think they are, and how backward and oppressive they consider the rest of us to be

If you haven’t heard the term “cultural appropriation” before, you can expect to hear it a lot over the next few years. And if you have the misfortune of living anywhere near a university campus, you may even hear it shouted in your face by a raucous student protester, high on their own self-importance.

In fact, even if you’re not committing the modern day sin of cultural appropriation right now, you are almost certainly guilty of doing it at some point over the past twenty-four hours. Go and do your penance now. I’ll wait.

Cultural appropriation is the latest verbal weapon used by virtue-signalling lefty student activists – snivelling Millennial egotists who arrived at university only to find the worst oppression and discrimination already vanquished by previous generations, and who are now desperately casting around for a new cause to justify their Chinese-manufactured Che Guevara t-shirts.

Let’s put it like this: are you a white person who likes rap music, or who (heaven forfend) listens to music by white rappers from Eminem to Iggy Azelea? Then you’re a cultural appropriator. By appreciating or assimilating something from outside of your own ethnic community, you have plundered the culture of your downtrodden minority friends and neighbours, making light of their most sacred and noble traditions for your own carefree amusement. Didn’t realise that’s what you were doing? Doesn’t matter, you’re still guilty.

Or maybe you really fell in love with Thai cuisine when you were on that round-the-world trip, and now you love to cook Thai-inspired meals at home, with your non-Thai hands, in your non-Thai kitchen, for your non-Thai friends. That’s cultural appropriation too. Shame on you. If you are a white American you should subsist entirely on cheeseburgers, barbecue and other culturally appropriate fare. God help you if you’re a Cockney but not mad for jellied eels.

Stay away from that lasagne if you’re from Idaho or Utah – can’t you see how eating pasta belittles and marginalises Italian Americans? And as for ordering Kung Pao chicken from your favourite Chinese takeout, why don’t you just start reading aloud from Mein Kampf in the town square, you nasty little fascist? Clearly you have no feeling for the mental safety of Asian Americans, who might feel mocked and excluded by your thoughtless foodcrime.

You get the idea. Before doing anything, first get out your Hierarchy of Privilege and remind yourself exactly where you fit on the Spectrum of Oppression. White and male? Tough luck, you can sample only from those other white, male cultural pursuits. Black, disabled and of undefined gender and sexuality? Then the world is your oyster – at least in the surreal world of academia.

And now the Stepford Students are coming to take away your Yoga classes, because chances are you aren’t from India – and therefore you are guilty of the cultural appropriation of Indian culture.

From Brendan O’Neill’s weary report in The Spectator:

Just when you thought uptight, fun-dodging, thought-policing millennials couldn’t get any worse, they go and brand yoga as racist. Apparently, when white people bend themselves bonkers while humming or thinking happy-clappy thoughts, they’re not only being self-punishing saps: they are also ‘culturally appropriating’ a practice that has ‘roots in Indian culture’.

That’s according to student leaders at the University of Ottawa, who put pressure on a yoga teacher at the uni’s Centre for Students with Disabilities to call off her yoga classes. She was told ‘there are cultural issues of implication involved in the practice’. In these people’s minds, in which the Offence-Seeking Antenna is forever turned to High, a white person doing yoga is not that different to a white person donning blackface and singing ‘Mammy’.

O’Neill goes on to point out:

The PC rage against cultural appropriation is ultimately a demand for cultural segregation, for black people, white people, Latinos, gay people, women and every other racial, gender or sexual group to stick with their own culture and people and not allow themselves to be diluted by outsiders.

Gay men have been condemned by the National Union of Students for ‘appropriating black female culture’. Barmy NUS officials think it’s the height of racism for a gay guy to talk about having an ‘inner black woman’. The irony being that it’s hard to think of anything more racist, or at least racially divisive, than the ideology of cultural appropriation: its obsession with cultural purity echoes some of the darkest political movements of the twentieth century.

It’s easy to dismiss these incidents as merely a case of a few activists getting a bit too carried away, or going a bit too far. But incidents such as these are happening more  and more often, on both sides of the Atlantic.

Whether it is British students shutting down a debate about abortion and trying to get Germaine Greer banned from campus, or pampered Yale students insisting that the point of university is not to learn but rather to feel warm and snuggly, these stories are becoming more extreme, more frequent and ever more ludicrous to the uninitiated.

This is in large part because the authorities – university chancellors, society presidents and anyone else called upon to be an auxiliary parent to these toddlers-with-diplomas – too often reward this hysterical behaviour by apologising for offending the Stepford Students and giving in to every one of their tyrannical demands. Which then encourages the next crop of baby-faced tyrants to make even more outrageous demands in the name of creating a “safe space”.

With their accusations of “cultural appropriation” and unquestioning embrace of the politics of identity, these student activists are starting to create a New Apartheid – on their university campuses and in their hermetically sealed social circles of likeminded social justice warriors. Their overriding concern with protecting the “purity” of various minority cultures resembles nothing so much as the anti-miscegenation laws of the last century. And all of this they do without a hint of irony.

These students are nothing so much as High Priests of the Politics of Identity. Like other clergy before them, they derive their power from claiming the exclusive ability to speak on behalf of their secular god and telling the rest of us what we must believe and say. But in place of stoning or crucifixion being the penalty for blasphemy we now have new, modern shamings carried out on social media.

In a famous scene from Aaron Sorkin’s show The Newsroom, the lead character described the American Tea Party – with their intolerance of dissent and insistence on ideological purity – as being like an American Taliban. But I wonder if the real progressive Taliban can’t actually be found on our university campuses, in our student union bars and in the front row of your nearest anti-austerity rally, shouting “Tory Scum!” at terrified old ladies.

If we let these fragile young tyrants win, we will eventually all be ghettoised, forced to keep strictly to our own “communities” (community being defined strictly by racial or religious criteria) and only allowed to engage with other people in the controlled environment of “safe spaces“, where our speech and behaviour is micromanaged to ensure that we do not “trigger” anybody else with the problematic “microaggression” of our mere presence.

Yes, there is a dangerous radicalisation process taking place on our university campuses today. But deluded young radicals are not only rallying to the black flag of ISIS – we should also mark those who drink so deep from the well of Social Justice that they would make us all slaves to their cause.