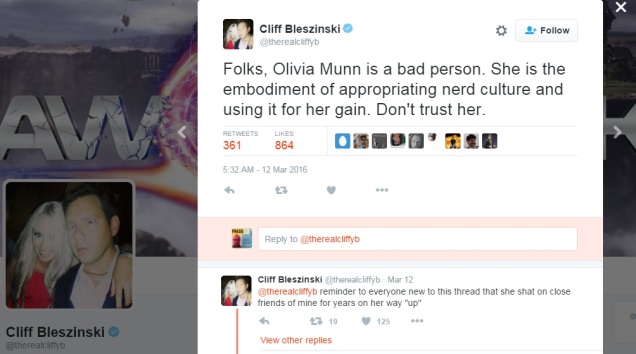 The latest addition to the list of marginalised and oppressed victim communities: geeks and nerds, who are being made to feel unsafe because hot girls are appropriating their culture by daring to display an interest in comics and video games.

Yesterday, video game designer Cliff Bleszinski (widely known on the internet as “Cliffy B”) tweeted that actress Olivia Munn was “appropriating nerd culture”, taking advantage of it for personal gain.

That appears to have partly stemmed from an earlier interview wherein Munn was quoted as saying she did all of her own stunts for X-Men: Apocalypse – which, unsurprisingly, has the stunt community pretty unhappy, since it’s typically a stuntperson’s responsibility to test out a physical stunt for safety reasons before they’ll even allow the actor to try and take it on. So while Munn may have performed a large number of stunts herself, she didn’t give credit where credit’s due (and that also may have been an unintentional gaffe). But that’s not what the Internet glommed onto.

Barring whatever personal issues or history Bleszinski may have with Munn, the fact remains that the phrase he used is particularly unfortunate. The accusation is insulting to the real and on-going issue of cultural appropriation: instances of celebrities or brands embracing a culture other than their own and profiting from it without understanding it or fighting for the issues faced by said culture.

[..] Ultimately, it just feels like a slap in the face to real cultural appropriation and a mere rehash of the old and tired “fake geek girl” meme. At the very least, it’s someone using their beef with another person to manufacture outrage over a thing that doesn’t actually exist.

Another delightful case of Identity Politics cult members self-cannibalising and turning their fire on their own? Yes – and so soon after I had mentioned that this phenomenon seems to be less common in America than it is in Britain. It certainly looks as though the United States is racing to play catch-up.

Folks, Olivia Munn is a bad person. She is the embodiment of appropriating nerd culture and using it for her gain. Don't trust her.

But there is a fair degree of nonsense to unpick on all sides here.

Take the stuntpeople who apparently feel “invalidated” – their professional accomplishments made to vanish in a puff of smoke – because one actress (probably unintentionally) failed to acknowledge their behind-the-scenes contribution sufficiently fulsomely. And people like TheMarySue’s Carly Lane, who then take offence at the original offence takers for daring to be offended by something which is less offensive than something else experienced by other, more righteously offended people.

What we are now witnessing – with people who were thus far completely removed from the Safe Space and Trigger Warning culture on college campuses now walking and talking exactly like today’s illiberal student activists – is akin to the efforts of a younger teenage sibling trying to ape the behaviour of their older siblings already at college by adopting their language and behaviour in an attempt to look “cool” and grown up.

If older brother or sister spends all of their time occupying the dean’s office protesting for the provision of more campus safe spaces for minorities, the younger sibling will often unsurprisingly learn to think that this is how young adults are supposed to behave, and apply the same nomenclature of Identity Politics, victimhood and oppression to their own, more juvenile lives. And this is the result:

Like the Tumblr therians, people who think they are cats and other self-promoting cases of species dysphoria, the idea of nerd culture being unjustly appropriated by outsiders is a natural consequence of what happens when the fussy, victimhood-soaked language of Identity Politics is picked up by ordinary people and used in mundane scenarios to describe everyday life.

The social networks Twitter and Tumblr in particular are awash with outraged ranting and virtue-signalling about the evils of cultural appropriation – only recently, Harry Potter author JK Rowling was hauled over the coals for unintentionally stepping on an Identity Politics landmine – and so it is hardly unsurprising that even people not deeply connected with the movement are adopting the same language and the authoritarian attitudes behind it.

Is the idea that nerd or geek culture can be “appropriated” in a way which is harmful to self-identifying nerds or geeks absurd? Absolutely. But no more so than the idea that a white person practising yoga harms the Indian culture, or that putting an unorthodox ingredient in your breakfast taco causes deep and lasting harm to the people of Mexico.

This is competitive victimhood plain and simple, with Identity Politics cult adherents on both sides of the Atlantic rushing to portray themselves as the most oppressed and “marginalised”, and then furiously denouncing others for supposedly overstating their position in the Hierarchy of Oppression.

The fact that is has now culminated in the spectacle of comic and video game-loving nerds and geeks being outraged that an attractive Hollywood actress has adopted and promotes elements of their lifestyle is only further proof of the ridiculous places you end up when you follow the Identity Politics trail to its logical end.

One thought on “Hot Women: Wrongfully Appropriate Nerd Culture At Your Own Risk”