First published at the Conservatives for Liberty blog

What exactly constitutes the political centre, anyway? Is it even a real thing? And why are we so in thrall to something so vague and ill-defined?

The political centre ground: people talk about it all the time. It is meant to represent the silent majority, that great conclave of wise and sage-like citizens who – unlike us hotheated partisan folk with our strong beliefs and awkward ideals – remain serenely above the political fray, calmly and methodically weighing competing policies against each another before arriving at their pragmatic, irreproachable voting decision on polling day.

Every British political party leader since Thatcher left office has been in hot pursuit of the political centre ground, happily throwing established party orthodoxy and revolutionary thinking alike out the window, preferring to court the good opinion of people who took a good look at Labour’s managed decline of the 1970s and the Tory individualism of the 1980s, and, Goldilocks-like, decided that they prefer something half way between the two, thank you very much.

But who are these political centrists? Do they actually exist, or are they an artificially created demographic, an amorphous and shifting blob of people whom the pollsters have not yet found a better way to categorise?

It’s a relevant question, because you can be assured that British politics for the next five years – or at least, the narrative around politics constructed by the media – will be all about the political centre, and which party is doing the better job of wooing it approaching the 2020 general election.

Conventional wisdom says that the Labour Party are committing an act of political suicide by leaning toward choosing Jeremy Corbyn as their next leader – a man who (gasp) holds traditional Labour values about the state ownership of industry, hiking up government spending and running down the military. Such a person could never hope to win over the “centrists”, say Every Talking Head You See On TV at the moment, as though it were a piercingly insightful comment that might help us better understand Labour’s folly.

Conventional wisdom also dictates that the Conservative Party, thanks especially to the political wiles of Chancellor of the Exchequer George Osborne, are making bold and strategically brilliant moves to woo the “centrists” with policy offers they can’t refuse, thus cementing a Tory hegemony in power for years to come.

So Labour politicians are brave and bold when they start talking about fiscal responsibility and balanced budgets, while Conservatives are “compassionate” and politically astute when they enthusiastically adopt big government ideas like the introduction of a national living wage. We clearly seem to like it best when our politicians engage in ideological cross-dressing, so is it any wonder that we end up with bland, inoffensive candidates ready to adopt any slogan or disown any deeply held principle in the search for power?

But what if the fabled political centre doesn’t exist – or is only a small group casting a large shadow, while another unacknowledged mass of voters goes unnoticed and un-courted by the main political parties?

Bring up the subject of taxation, to pick a random example, and you’ll get a group of people who strongly feel that taxes should be cut in order to stimulate the economy and allow taxpayers to keep more of what they earn, and you’ll get another group of people who think that it’s morally obscene that some people are enjoying themselves, so we should make the tax code more punitively progressive to help bring about social ‘equality’. But you’ll also get a third group of rather bovine people who look up from Britain’s Strictly Come Bake-Off On Ice, wipe the pizza grease from their mouths and just say “what?”

At present, we tend to think of this last group of people as “centrists” or “swing voters”, simply because they do not quote direct from either the Labour or Conservative Party manifesto when asked to offer a political opinion. But are they really centrists? There’s a world of difference between someone who carefully studies the competing policies of different parties to arrive at a considered position half way between two extremes, and someone who mutters something about politicians being “all the same” before their eyes glaze back over.

What if rather than there being a rich goldmine of real centrist voters out there – people who pay close attention to politics and legitimately arrive at a position somewhere between Labour and the Tories – there is instead just a massive, congealed fatburg of low-information voters bobbing around, people who simply haven’t paid enough attention to come to an informed opinion about the great issues of the day? 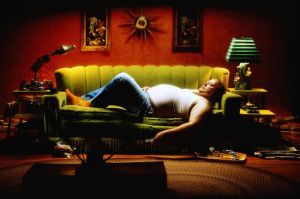 Britain has been stuck in a centrist political malaise for years because the operating assumption has always been that failing to cling on to the remaining pillars of the post-war consensus or the Thatcherite changes which softened them would be suicide for a major political party.

Thus the Evil Tories never did disband ‘our NHS’, despite the frantic warnings of the Left and despite having enjoyed many years in government where they might feasibly have done so. And thus the Labour Party is still full of people who call one another ‘comrade’ and sing the Internationale together, but who took zero steps toward renationalising BT or the energy companies during their last thirteen years in power.

But perhaps not for much longer.

Now, with the rise of Jeremy Corbyn within the Labour Party, perhaps it is finally time for us to stop being in thrall to the capricious whims of the low-information “swing” voter, that cretin who always has something better to do when a news bulletin comes on TV and whose bovine grunts of “they’re all the same” is not the result of any effort to compare Britain’s politicians, and far more to do with the fact that they cannot understand anyone who doesn’t communicate in TXT SPK. LMAO.

US comedian Bill Maher was absolutely right about low-information voters, saying of the 2012 presidential contest between Barack Obama and Mitt Romney:

Look, it’s okay that there’s a tiny fraction of uncommitted voters in a few swing states who will decide this election, but can we please stop treating them like they’re somehow more noble and discerning than the rest of us?

[…] And that, in a nutshell, is America’s undecided voter, put on a pedestal by the media, as if they were Hamlet in a think tank, searching out every last bit of information, high-minded arbiters poring over policy positions and matching them against their own philosophies. Please. They mostly fall into a category political scientists call low-information voters, otherwise known as dipshits.

[..] And the worst part of all this is that America’s entire electoral process – the debates, the conventions, the ads, the photo ops with the corn dogs – it’s all targeted at this tiny segment of the population who is just not that interested, which would make them by definition the least qualified for this decider’s role.

When are low-information, wishy-washy people ever desirable to talk to? There’s a reason why when you have a problem you never seek their advice. Hey, you know who you should talk to about that thing you’re going through? Someone who doesn’t know anything about it!

This year at the debates we should skip that thing where the ‘undecideds’ dial in their reaction to every little moment, and instead hook up the dial to their foreheads to see if there’s any measurable brain activity.

Amen to that. And can we also please disenthrall ourselves of the unsupported and misleading notion that these “centrist” voters will immediately startle like shy fauns if they encounter a strong political opinion once in awhile, when most of them probably could not run for the bus in the morning, let alone into the arms of another political party?

It’s time to loosen the chokehold these vacillating people have on our politics. Labour look as though they are about to fire the first shot in the fightback by electing Jeremy Corbyn as their leader – a man of conviction with some often daft but discernibly left-wing ideas. And a very good development it is, too.

When will the Conservative Party finally muster the courage to do the same, and stop toning down or apologising for their small government principles?

When will the Tories quit trying to appeal to those who patently do not care either way, and instead turn the 2020 general election into a real battle of ideas?