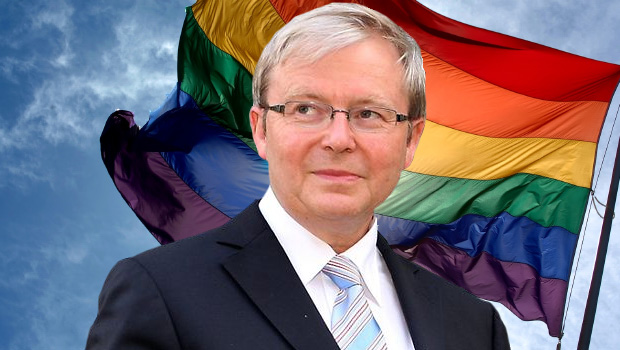 With the Australian general election campaign drawing to a close, the website Upworthy.com highlights an exchange between sitting Prime Minister Kevin Rudd and a pastor who questioned Rudd’s change of heart on the subject of gay marriage.

The exchange took place at a recent general election Q&A session between Rudd and Australian voters, and is shown here:

The Guardian reports on the same event:

Mr Rudd was questioned about the issue by Christian pastor Matt Prater during a live Q&A session.

Mr Prater asked Mr Rudd how he could support gay marriage as a Christian. “If you call yourself a Christian, why don’t you believe the words of Jesus in the Bible?” he said.

Mr Rudd responded: “Well mate, if I was going to have that view, the Bible also says that slavery is a natural condition.”

“Because St Paul said in the New Testament, slaves be obedient to your masters. And therefore we should have all fought for the Confederacy in the US Civil War.”

It is hard to put the case – not just the civil rights case, but also the Christian case – for marriage equality much more succinctly than Rudd manages to do in the space of these few minutes. Indeed, in the Twitter feed at the bottom of the screen, one viewer can be seen retorting “KRudd just pulled a Jed Bartlet on that guy”, a reference to fictional President Josiah Bartlet from TV drama The West Wing.

Sadly, at least in terms of government policy relating to equal marriage in Australia, it appears that opposition leader Tony Abbott and his conservative coalition are poised for a decisive victory when voting takes place this weekend.

Tony Abbott will be in no hurry at all to pick up Kevin Rudd’s baton (no pun intended) with regard to this particular issue, so civil rights for gay and lesbian people in Australia is likely to be stalled for some time.

An evening of political intrigue and drama tonight in Australia, in what The Guardian describes as “an unprecedented day of political bloodletting in Canberra”:

The day of high drama began in the morning, when supporters of Rudd, who had advocated his return to the leadership for the past three years of the hung parliament, began circulating a petition to try to force a contest in this, the last sitting week of parliament before the September election.

Within hours, Gillard went on the attack and made the decision to hold a snap vote on her position. “It is in the best interest of the nation and the Labor party for this to be resolved,” she said. “This is it. There are no more opportunities, tonight’s the night.”

Wednesday’s change of leader follows months of speculation, during which Gillard made clear she would not stand down despite opinion polls that repeatedly showed Rudd to be the more popular leader.

With the party’s support dwindling to about 30%, and the prospect of Labor losing at least half of its parliamentary seats, she stood firm while Rudd’s backers plotted.

After enduring near continual speculation about her grip on the Labor party leadership, very troubling polling numbers heading into the coming general election, and several very unpleasant personal attacks from people who should know better and be ashamed of themselves, Prime Minister Julia Gillard called a snap leadership election of the Federal Labor Party – and lost convincingly to longtime rival and former Prime Minister Kevin Rudd.

Gillard was, of course, the first woman prime minister of Australia, and her notable achievements include guiding the Australian economy relatively unscathed through what has been a torrid economic period for most western countries, enacting educational reform, improving foreign relations with the US, China and India and starting a crackdown on child sexual abuse in institutional settings, a problem that has plagued many countries.

Kevin Rudd’s eloquent and moving resignation speech following his loss of the Labor Party leadership to his then-deputy, Julia Gillard, in June 2010:

And Julia Gillard having to give way under much the same circumstances in June 2013:

Certainly a remarkable comeback for Kevin Rudd following once-abysmal personal polling numbers, several abortive attempts at a comeback and two separate efforts by fellow Labor colleagues to draft him back as leader.

But what is perhaps most remarkable are the anti Tony Abbott sentiments expressed by so many of the Labor party politicians who have been commenting on television today, from Kevin Rudd on downwards. Indeed, some parliamentarians and even cabinet members seem to have been willing to fall on their swords and potentially risk the wrath of the electorate and their colleagues not just to bolster Labor’s chances of clinging to power in the coming election, but more to deny Opposition Leader Tony Abbott and the Liberal Party (currently surging in the polls) the chance to form a new government.

There are significant fears that an Abbott government would implement austerity measures similar to those enacted to such remarkable and stimulative effect in the United Kingdom, and the prevailing opinion is that Labor can best mitigate their losses at the coming election under the leadership of Kevin Rudd rather than Julia Gillard.

The two leaders seem to have very different leadership styles; it remains to be seen whether Rudd will have time to stamp his authority on his restive party and turn the polls around before the general election.

UPDATE – Kevin Rudd’s remarks to young people at the end of his brief speech to the media, his apology for the low skulduggery of politics that has alienated many young voters and promise to do better, was a nice touch.

UPDATE 2 – The Telegraph reminds us that the current constitutional settlement in Australia is far from satisfactory. Without making any comment on whether Australia should retain the Queen as Head of State or become a Republic, it is clear that an appointee from London should not be making decisions in another countries’ internal political affairs:

But Mr Rudd’s return as Labor leader leaves serious questions about Australia’s immediate political future. Labor holds power in a hung parliament, so Mr Rudd’s leadership win does not automatically mean he will become prime minister. The matter may need to be decided by the Governor-General, Quentin Bryce; complicating the matter further, her daughter is married to a senior minister, Bill Shorten, who openly supported Mr Rudd’s leadership bid.

Disaster averted on this particular occasion, but someone might want to consider tinkering with the rules and the Constitution some time soon before we risk ending up in hot water.