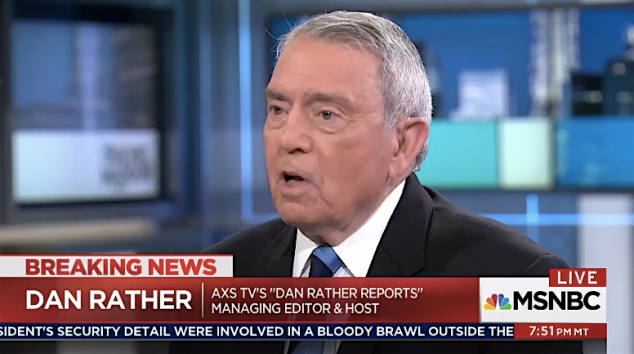 The migration crisis cannot be solved by feelings alone

Dan Rather – elder statesman of American television journalism, disgraced during the George W. Bush administration but lately rehabilitated before a new social media audience in the Age of Trump – thinks that the best way to tackle the intractable, thorny issue of mass immigration and the global migration crisis is to read a rather jejune, unsubtle poem about the subject, and let our feelings be our guide.

Immigration is always going to be a difficult subject but we cannot allow that to rob our nation of its decency, humanity and empathy.

It is true that we do not have the capacity to welcome everyone who wishes to come here. But at the same time, we cannot forget that our country has been shaped by immigration. And can we not see the echoes of our own history in the faces of the men, women, and especially children, now coming to our borders and shores?

It is a tragic irony that many who now wish to slam the doors shut to the newcomers without a shred of empathy have their own ancestors who must have felt the same swirling emotions as our newest arrivals. Their dreams, the bravery of their journeys, and their fears are undoubtedly similar to the basic human experiences of those who yearned to be Americans in decades and centuries past.

[..] I recently came across the poem “Home” by the young British poet Warsan Shire. It is a powerful and thought provoking work of art. I think it is something everyone should have to read before participating in the immigration debate or formulating policy.

Dan Rather then links to a poem by young British poet Warsan Shire, entitled “Home”. In this poem, apparently, we can find the Arkenstone of wisdom which will allow us to effortlessly solve a global migration crisis brought about by persistent dysfunction and turmoil in some countries, and a growing unwillingness to enforce or acknowledge national borders in the richer, stabler countries to which millions of people now flock.

your neighbors running faster than you
breath bloody in their throats
the boy you went to school with
who kissed you dizzy behind the old tin factory
is holding a gun bigger than his body
you only leave home
when home won’t let you stay.

And then this articulate reflection on the reaction to illegal immigration (cast deceptively in the poem, as elsewhere, as opposition to immigration and asylum in all their forms) in the recipient countries:

This is, in fact, not a very good poem. It is certainly not remotely original, in language, imagery or message. One might more accurately describe it as standard boilerplate leftist open borders talking points, fractured and separated into verses to lend the words a vague air of profundity.

It also happens to be factually incorrect. Many people leave home when they are far from imminent danger, but rather for economic advantage. The poem attempts to describe the plight and emotions of refugees, but does not account for people who pass through multiple other safe countries en route to the United States, or who move illegally simply because financial prospects are better on the other side of a national border. Unfortunately, this is the standard modus operadi of the Open Borders Left, cheerfully conflating economic migrants and refugees, legal and illegal immigrants under the same banner and presumptuously declaring that opposition to or equivocation about one form equals opposition to all.

Only recently I moved from my native Britain to America, not because the United Kingdom is ravaged by armed conflict and strife but because I am attending law school as part of a career change. I immigrated legally, willingly subjecting myself to an intrusive, expensive and stressful process in order to comply fully with the laws of the United States. And I was glad and grateful to do so.

People move countries for a multitude of reasons, but Dan Rather wants to you read this mediocre poem before you engage in the immigration debate because he (and many others like him) do not want you to think about people moving for economic reasons when you ponder immigration controls and enforcement. He wants to trick you into thinking that all illegal migrants are refugees fleeing immediate peril, and then tug on your heartstrings to push you toward the de facto open borders position he clearly holds but lacks the courage to embrace outright.

So we have read the poem – now what? What exactly does Dan Rather think we should do with this “information”? How should we let it inform our policymaking, both our long-term strategy and day-to-day tactical decisions in response to changing situations at the border? Rather neglects to spell it out in his Facebook post, but you can place a pretty safe bet that his unspoken hint could be summed up as “let everybody in, all the time, no questions asked”.

Dan Rather would rather emote and share sentimentalist poetry on Facebook than propose an alternative immigration scheme for the US, or spell out the compassionate but forever-ethereal approach that he would adopt. He says that not everyone can be welcomed but then has nothing but criticism for anyone who attempts to draw or enforce any line against illegal immigration or selective asylum seeking (attempting to reach a preferred country rather than the first safe one) as cruel, unfeeling and inhumane.

We see this time and again from many on the Left who are all too happy to bank the political and social capital which comes with being seen as compassionate and pro-immigration while remaining infuriatingly evasive about where exactly they draw the line on enforcing the rule of law. If Donald Trump’s present policy of separating parents and children apprehended while making illegal crossings rather than presenting at official points of entry is morally reprehensible – and it is – then the self-satisfied preening of many on the Left, effectively endorsing open borders without having the courage to say so, is political deception and moral abdication of a different sort.

Dan Rather believes that everybody should have to read a poem which addresses only one category of overall migration and one type of migrant experience in order to manipulate our mindset before participating in the immigration debate. Yet he and others of his persuasion are the same people who accuse the other side of being reactionaries motivated by base emotion while they are the enlightened, compassionate disciples of reason. How hollow, how fatuous, how utterly hypocritical does this claim sound in light of Dan Rather’s call for everyone to read a poem and legislate based on their immediate feelings?

The global migration crisis is a complex, intractable problem involving millions of people in many countries and regions. You cannot formulate good policy of a systemic nature by responding to emotional manipulation, or by relying exclusively on feelings rather than qualitative and quantitative facts. Individual stories of hardship and injustice are certainly a key component when it comes to informing political decision-making, but what is best for the heart-rending case before us today is not necessarily what is best for people tomorrow, or for society overall.

Many on the Left continually fail to recognise this basic truth, doing (or advocating for) what makes them feel good and compassionate in the short term, even if it leads to greater problems or evils in the longer run. How many hand-wringing speeches and editorials have we witnessed in Europe and Australia decrying the idea of turning back illegal migrant boats, even though their preferred policy of allowing or even encouraging illegal sea crossings leads to more failed attempts and more drownings in the longer term? Yet this seemingly does not matter to the Open Borders Left – by this point they have already burnished their reputations as progressive, compassionate people by advocating for the previous boat, even as the next overcrowded raft capsizes and slips beneath the Mediterranean.

That’s what happens when you act purely on feelings rather than evidence. People who forever accuse Trump and Brexit voters of being motivated by reactionary feeling and superstition over facts and reason should appreciate this, yet on the subject of illegal immigration and the migrant crisis they tend to be the ones most likely to cast any strategic long-term thinking out the window in pursuit of whatever salves their conscience in the given moment.

Poetry at its best is arresting, sublime, transfiguring, a wonderful way of evoking or capturing the essence of its subject in a way that prose alone can not. But no intractable problem in human history that I am aware of has been solved primarily through poetry. It took the Apollo Program and a Saturn V rocket, not the words of Carl Sandburg or Maya Angelou, to put a man on the moon. The great Homerian epics evoked mighty and fantastical deeds from the past; they were not a contemporary call to action.

Dan Rather’s suggestion that we all need to read a rather insipid, pedestrian poem about the plight of refugees in order to be more well-rounded participants in the wider immigration debate suggests a prevailing lack of sympathy which is largely nonexistent among policymakers of all stripes. Most of us feel viscerally for the plight of people driven to leave their homes in search of safety or greater prosperity, and would likely do the same placed in their situation. Unfortunately the rule of law, national security and the viability of the nation state do not lend themselves so easily to florid literary depiction, but this does not make them any less important.

Emotional manipulation, whether it originates on the Right or the Left, is always unhelpful and never conducive to the kind of political compromise which we all know is ultimately required in order to address immigration, namely compassion for those already here illegally in exchange for serious future border control and enforcement.

Dan Rather in his prime would probably have readily acknowledged this fact. Sadly, the dried out husk that is Dan Rather today would rather emote with his social media audience than help lead his country to that necessary compromise.

5 thoughts on “Dan Rather, Solving The Migration Crisis Through Poetry”