Don’t waste time laughing at over-enthusiastic Labour activists who claim that their party “won” the 2017 general election despite falling 56 seats short of the Conservatives. Labour will soon be celebrating for real unless the Tories can close the enthusiasm deficit with Corbyn’s motivated activists

Abi Wilkinson makes an important point in Total Politics today, refuting the growing accusations that the ebullient and positive Labour Party conference in Brighton is somehow a sign of derangement or complacency on the part of left-wing activists:

To dismiss the jubilance on display at the party’s recent conference as hubris is to misunderstand what’s going on. The MPs who claimed, at fringe events and on the main conference stage, that they believe Labour will win the next election were not, on the whole, complacent about what such a victory might require. Nor were any of the smiling, energetic young activists I met at Momentum’s The World Transformed parties and panel discussions naive about the challenge the party faces.

These are individuals who’ve spent the past couple of years campaigning and persuading, as the majority of the mainstream media and parts of their own party screamed that they were idiots, wreckers and dangerous hardliners. They’re people who were determined enough to drag themselves out door-knocking even when the polling gap appeared uncloseable. They built apps, organised car pools and slept on sofas to ensure that key marginals were flooded with volunteers. Many of them donated their time and skills to outmatch Tory efforts on a fraction of the budget.

This is absolutely true. Politics is an expectations game just as much as it is a net results game. Surpassing expectations can inject unstoppable momentum into a political party or movement, while failing to meet expectations can drain energy and enthusiasm faster than air escapes a burst balloon. That’s why Theresa May’s Conservative Party has the unmistakable pallor of death about it; grey-skinned, dead-eyed and utterly bereft of purpose, it shuffles forward to its party conference in Manchester like a zombie.

But even more than expectations, politics is about narratives and ideas. This was seemingly forgotten in the centrist, technocratic age ushered in under Tony Blair and growing to full fruition under David Cameron. For a long time, political elites have professed bland managerialism, aiming to do just enough to keep the population quiet with “good enough” public services and not much more. There was certainly no soaring national ambition or optimism for a different future preached the whole time that I grew up under Tony Blair and came of age under Brown, Cameron and Clegg. And the people miss it. You can explain Brexit and the rise of Jeremy Corbyn a million different ways, but one absolutely irrefutable component is the fact that people responded to politicians who offered something more than to hire a few more nurses and make the trains run on time.

Jeremy Corbyn has a compelling narrative because he actually believes in something, and people know he believes in something because he has been banging on about the same things for thirty-odd years, and doesn’t have to consult a focus group before he opens his mouth to respond to a question. So Labour’s confidence comes from a combination of new-found charisma at the top (say what you will about any of Corbyn’s centrist leadership competitors, but none of them could be described as charismatic) and huge energy and enthusiasm within the base. This is a potent combination, not to be sniffed at by cynical journalists and arrogant Tories who utterly failed to predict the 2017 general election result.

Enthusiasm is one of the most important resources Labour has. A party pursuing an agenda of increased tax and redistribution, regulation and nationalisation is never going to have a cosy relationship with media barons and big business in general (though it’s worth noting that the corporate lobbyists who stayed away from last year’s conference came flooding back this time) but it can reach people in other ways. Keeping activists’ spirits up ensures they’ll keep doing the work that’s necessary to maximise the likelihood of a Labour win.

Maybe it’s possible the current mood could tip over into slack triumphalism, but I’ve seen little sign of it yet. Many of the conference fringe events I attended involved smart discussions about what the party’s strategy going forward should consist of. Is it realistic to think that youth turnout could be increased further? Are the Tories capable of coming up with a decent answer to the housing crisis, and if they do so how will that impact our vote? What can we do to win over pensioners? What about self-employed tradespeople, a demographic we performed comparatively poorly with?

Does this sound like complacency? Hell no – it is determination. Labour might not be measuring the curtains in 10 Downing Street, but they have certainly tapped the address into their GPS and turned towards Whitehall.

This should be enormously worrying for conservatives, not least because the Conservative Party conference in Manchester promises to be a constant parade of recriminations and mediocrity, with Theresa May’s vacuous Labour Lite conference speech the rotting cherry on a very stale cake. The only enthusiasm on display will be among the cheerleaders and acolytes for the various potential Tory leadership challengers, waiting in the wings lest the prime minister make one more fatal error of judgment or messaging.

And if the government falls or the country otherwise gets dragged to the polls again before the Tories have had a chance to get their act together, what then? Corbyn is already on the brink of becoming prime minister, and increasing numbers of Britons are swallowing his story. The Conservatives, meanwhile are organisationally, intellectually and ideologically exhausted after seven years of being in office, but never really in power.

This blog has already warned how Labour’s hard left wing spent their summer busily plotting and organising for the next election to get them over the finish line, not licking their wounds, sunning themselves in Italy or plotting future leadership challenges. Momentum has been actively learning from the surprisingly viable presidential primary campaign of Vermont senator Bernie Sanders, who fought Hillary Clinton nearly all the way to the Democratic convention. And now groups of Momentum activists from sixteen to sixty years old are gathering in meeting rooms to learn how to make better use of online campaigning coordination and voter turnout software, while others are learning how to run a viral video campaign on social media even more successful than the 2017 effort.

Unfortunately, aside from last week’s Big Tent Ideas Festival and a series of articles in Conservative Home, the Tories have been engaged in no introspection and no reorganising of any kind.

As I recently fumed:

Meanwhile, what are we conservatives doing to retool ourselves to better fight the next general election? We are creating juvenile Jacob Rees-Mogg fanclubs on Facebook, engaging in pointless speculation about a cast of future leadership contenders all alike in blandness, and spending more time trying to ingratiate ourselves with the Tory party machine in constituency and at conference than figuring out what we should actually stand for, and how we can persuade others to stand with us.

Abi Wilkinson and I obviously come at this from opposite angles – she does not want Labour complacency and is reassured because she sees the frenetic organisation efforts taking place on the ground, while I would love to see a bit more Labour complacency and am disheartened by the fact that left-wing activism and organisation so utterly outstrips any efforts on the Right.

I campaigned for the Tories in 2010. God only knows why, in retrospect, but I pounded the pavements in my hometown of Harlow, Essex to help unseat Labour incumbent MP and minister Bill Rammell and elect Tory Rob Halfon in his place. But today you couldn’t pay me enough money to slap on a blue rosette and stump for Theresa May’s Conservative Party, which has somehow managed to blend barking authoritarianism, a statist, centre-left approach to the economy and the general incompetence of Frank Spencer. And if the Tories can no longer get enthusiastic conservatives like me to actively support them at the constituency level, then there’s a real problem.

Abi Wilkinson is right – there is no general complacency within the Labour Party, only a frightening seriousness of purpose. The only complacency for the past seven years has been on the Right, and specifically within the Conservative Party.

And now that complacency is metastasising into something even more deadly and hard to eradicate – resignation and defeatism. 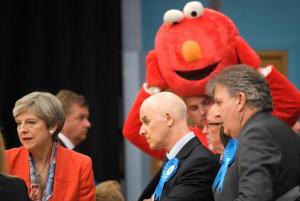