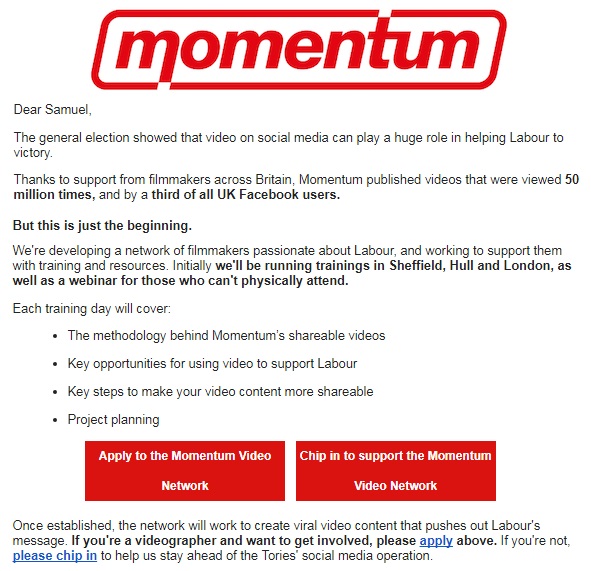 The hard Left is on the march, and all the anti-Corbyn negative ads in the world will not save an ideologically bankrupt Conservative Party which cannot clearly articulate an appealing and realistic vision for Britain

Look at this email, which pinged into the inboxes of Momentum members and supporters today.

The socialists are on manoeuvres. They haven’t wasted their summer sipping limoncello on the Amalfi Coast or plotting Oxford Union-style leadership coups with their Cabinet chums. No, having drawn blood from the Conservative Party and reduced the British prime minister to a laughing stock in the June general election, Momentum and other hard-left elements of the Labour Party sense that their long-awaited victory is nearly at hand. And they are training for the battle to come.

I wrote the other day about how the Conservative Party is fiddling while the country burns and Momentum creeps up behind them. This isn’t a laughing matter. Momentum are organising, deploying the latest in voter outreach strategies imported from the Bernie Sanders presidential campaign in America, and – shock, horror – daring to have conversations with traditionally Tory voters rather than engaging in fruitless navel-gazing introspection as the Conservative Party is currently doing.

Much was written during the election campaign about how much slicker and better financed the Tory online campaign was than its Labour counterpart. The Conservatives spent over £1 million on negative ads on Facebook alone. But it was not an effective campaign. It was soulless, clinical and relentlessly negative. All of which might have been forgivable if it had been properly targeted. But it wasn’t. Instead, CCHQ-produced messages designed to energise the existing Tory base were thrown relentlessly in the faces of swing voters, who did not respond to shrill warnings about Corbyn’s impending socialist takeover.

As with literally everything else about the Conservative Party, the online and voter outreach campaigns were hideously overcentralised and clearly managed by some of the same gormless nepotism beneficiaries who infested Theresa May’s pre-election Cabinet.

And still this might have been survivable if the Labour Party was as terminally dysfunctional as nearly every Westminster-based journalist was confidently reporting prior to the release of the exit poll. But it wasn’t, and still isn’t. Centrist doubters sat on much of their criticism for the duration of the campaign, and following the stronger-than-expected result came crawling meekly back to the leader they once openly undermined.

A vindicated Jeremy Corbyn is bolstered in his position. And the socialist hard-left of the Labour Party has benefited from this injection of confidence, immediately pivoting toward the next general election, where they believe they can dislodge this tired and pointless Tory government and turn the clock back to 1979.

I wrote the other day about how Momentum, Jeremy Corbyn’s praetorian guard, are holding group training sessions to teach their activists the latest in voter engagement techniques, with even doddery old folk less familiar with the latest technology being inducted into the organisation’s Slack group so that they can communicate in real-time on their smartphones. And now, today’s Momentum bulletin shows that the organisation also intends to revolutionise its social media campaign activities, potentially turning each of their members into a YouTuber capable of creating viral internet videos in support of the Labour Party.

Bear in mind: while the Tories vastly outspent Labour in the online campaign war, their dismal content failed to articulate any positive vision of conservatism and probably alienated half the people who viewed it. Meanwhile, Momentum’s videos were viewed 50 million times, and by a third of all the Facebook users in Britain. That level of penetration and engagement, on a shoestring budget, is incredible.

But you can’t just put it down to a superior grasp of online campaigning by the hard Left. People watched Momentum videos and kept coming back for more because they liked what they were seeing and hearing, or were at least open to the message. They did not respond warmly to the Conservatives, who engaged nearly exclusively in fearmongering and robotic negative messaging about their opponents, but many of them did respond to the side who took enough pride in their political values and had sufficient confidence and faith in those values to make a bold public case for More Socialism. And still Momentum is not satisfied. Still they seek to improve their messaging and hone their campaigning ability.

Meanwhile, what are we conservatives doing to retool ourselves to better fight the next general election? We are creating juvenile Jacob Rees-Mogg fanclubs on Facebook, engaging in pointless speculation about a cast of future leadership contenders all alike in blandness, and spending more time trying to ingratiate ourselves with the Tory party machine in constituency and at conference than figuring out what we should actually stand for, and how we can persuade others to stand with us.

Fellow conservatives, you need to wake up and hear this message while there is still time:

The hard, Corbynite Left are gunning for us. Hard.

Unlike conservatives, they have worked out exactly what their values are.

They are not ashamed of those values, and do not apologise for them.

They are hard at work translating those values into policy.

They are proud to proclaim those values and policies in messaging which appeals to the electorate, while we sound defensive and almost ashamed of our own policies and record.

They are convinced that they are on the right side of history, while we seem to have lost faith in the principles of free market capitalism and individual liberty.

They make an unashamedly moral case for their worldview while we seem content to sit at the back and pick holes in their sums, looking like soulless technocratic bean-counters.

They have a thriving youth movement. Ours was disbanded because of a bullying scandal, and because it was basically a giant Ponzi scheme with risible promises of future candidacies dangled in front of naive young activists.

Their activists dominate university campuses, their leftist dogma reigning supreme in the lecture hall and students’ union alike, while conservatives are an endangered minority who often face ostracisation or even official censure for speaking out.

But here’s the good news – this is a fight that we can win.

Regressive leftist policies of redistribution and nationalisation have brought poverty and misery in their wake everywhere that they have been tried, while the free market that we support has lifted more people out of poverty, subsistence and despair than any other economic system devised by man. There is a reason that the Left has gone very quiet about Venezuela, once their favourite case study of socialism in action.

The traditional Left/Right political divide is being augmented (if not replaced) by the Anywheres vs Somewheres dichotomy (or “open vs closed”, to use the more patronising terms). The Labour Party is marching away from its working class base of Somewheres because their self-serving parliamentary caucus is in thrall to the self-entitled demands of other Anywheres like themselves. This gives us conservatives a huge opportunity to steal their votes – after all, we stand for country, community and patriotism, the very values that the metro-left openly despises.

But we will only win this fight if we get our heads out of the sand, stop manoeuvring for status or creating stupid memes on Facebook and learn instead to boldly and unapologetically articulate conservative principles in the public sphere, without apology. Not the craven, Labour-copying principles of Theresa May’s authoritarian government. Not the paternalistic statism of Nick Timothy and the Joseph Chamberlain afficionados. Rather, we need to re-embrace the timeless principles of individual liberty, patriotism, respect for institutions, strong national defence and flourishing civic society over paternalist statism, which always come through for us when we actually have the confidence to articulate them.

And we don’t have much time. In this unpredictable age, with no majority and a number of difficult things to push through Parliament, Theresa May’s government could conceivably be toppled at any moment. Momentum and the hard Left is ready for the fight. We are not.

To use a topical Game of Thrones analogy, when the White Walkers are massing and threatening to breach the wall, it’s no good squabbling over which lacklustre, uncharismatic Cabinet minister should next occupy the Iron Throne. Now is the time to find some ideological dragonglass and fashion it into a viable electoral weapon before we are swept away by the Army of the Socialist Undead and Britain succumbs to another long winter of discontent.

Momentum have given us fair warning. They are not being secretive about their strategy and tactics. So we conservatives will have only ourselves to blame if we find ourselves undone by them.