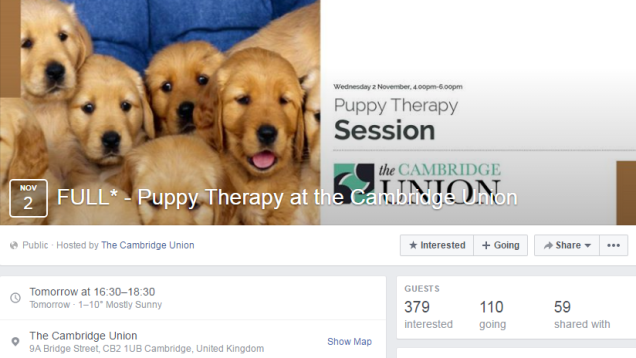 It is sad to see Cambridge University, my first alma mater, playing host to one of these infantilising “student puppy therapy” sessions. But after the Rhodes Must Fall nonsense at Oxford, it was only a matter of time before Cambridge started displaying more symptoms of the Adult Infantilisation Virus rapidly tearing through academia.

Whether you have a deadline looming, are worried about your workload or are stressing over the number of societies’ you signed up to at the Freshers’ Fair, what better way to take a break than with a puppy therapy session, organised with the kind help of volunteers at Guide Dogs UK. The Union welcomes the volunteers and their canine counterparts for a relaxed afternoon of socialising which forms part of the puppies’ Guide Dog training. Donations for the Guide Dogs for the Blind Association welcomed.

Now, to be fair: this is a slightly more laudable event than some other puppy therapy sessions we have seen on other university campuses. In many cases, the puppy therapy has been presented entirely as a student service (like a dining plan or library facilities) but at least in this case there is a clear and worthy charitable connection. Any harm that attending students may do to their own future emotional resilience will at least be balanced by a well trained new generation of Guide Dogs for the visually impaired.

But this could have been sold to students just as effectively by calling it “puppy socialisation training”. This being Cambridge, they probably still would have had a line out the door had they named it “Canine-Human Familiarisation and Interaction Practice in a Social Setting.” But they didn’t, because puppy therapy is now all the rage on college campuses, and because the prevailing culture tells us that we are all only one unexpected bad grade or nasty personal remark away from a nervous breakdown, and so are in constant need of institutional hand-holding.

It is the same corrosive worldview which gave us “Inner Child Day” at Cardiff University earlier this year, and the introduction of “Therapets” sessions at Edinburgh University. Therapy animals have traditionally been used to help PTSD sufferers such as returning armed forces veterans, children with severe autism and hospice patients undergoing palliative care for terminal conditions. Are we really now including “two essays due on the same day” or “signed up to too many societies” in this list of severe mental stresses?

The danger of doing so is that we wrongly exceptionalise the normal stress of everyday life, putting relatively pedestrian problems on a pedestal and making it seem as though the sufferer is truly benighted and in need of external aid. This just about works so long as the student remains within the infantilising university setting and part of the noxious Cult of Social Justice and Identity Politics. But when these links are severed and the real world beckons, students who have been encouraged for years to celebrate and exaggerate their own fragility are opening themselves to incurring real trauma when they have their first less-than-pleasant contact with an indifferent world.

Most employers – excepting some of the large or wealthy technology companies, who were some of the first to be infected by the virus raging through academia – will not provide a puppy room for harried employees under tight deadlines. And while HR departments are scrambling as they (rightly) respond more positively and proactively to mental health issues among their employees, they will never be able to be the overbearing, protecting, auxiliary parent in the same way that universities are now becoming.

If universities are to have a pastoral role beyond pure academia, surely they should see the nurturing of anti-fragility (the quality of absorbing negative impacts and becoming stronger as a result of them) among their students as far more valuable in the long term than pandering to students’ largely imagined sense of vulnerability.

Throughout their storied histories, Cambridge University has provided Britain with 14 prime ministers while Oxford has supplied 27, including Theresa May. These illustrious records will likely soon begin to wither if future Oxbridge graduates are conditioned to reach for the puppy videos every time there is a crisis.

The Cambridge Union – of which I am a disappointed life member – should strongly look at rebranding their puppy therapy event, now and for any future events. The time has come for the university and its associated institutions to take a brave stand and become part of the solution to the rise in victimhood culture, rather than a collaborator in feeding the problem. 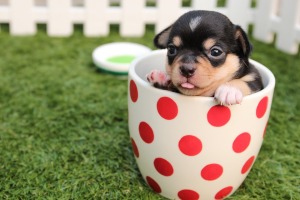