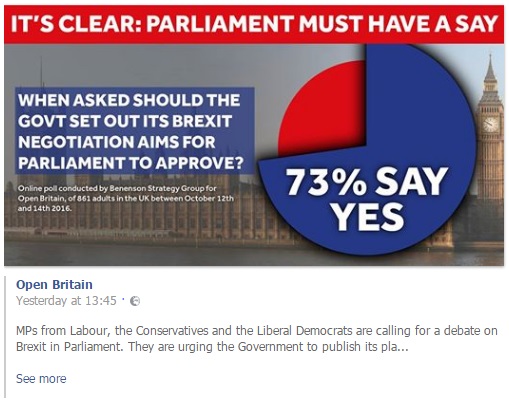 While advocating a “soft Brexit” as their fallback position, Remainers contradict themselves and expose the tawdry lies they told during the EU referendum

Even Open Britain, the shrivelled husk of Will Straw’s failed Remain campaign group Britain Stronger in Europe, has now effectively admitted that leaving the European Union need not be intrinsically economically harmful – thus undermining the central pillar of their case for staying in the EU.

The harsh light which Remainers are now knowingly shining on their prior scaremongering and lies is quite hilarious. By drawing a distinction between “hard” and “soft” Brexit and campaigning fervently for continued membership of the EEA, campaigners are effectively admitting that their many economic apocalypse warnings applied only to leaving the single market, and not the EU’s political union.

From an Open Britain campaign email sent to supporters yesterday:

Open Britain is campaigning for Britain to stay in the Single Market, which brings increased investment, trade, jobs and growth.

It seems the public agree. A new poll we commissioned has found that 59% of voters want the UK to stay in the Single Market, so there is no mandate for a destructive Brexit.

Now, MPs from Labour, the Conservatives and the Liberal Democrats are calling for a debate in Parliament. They are urging the Government to publish its plan for the forthcoming EU negotiations and to allow Parliament to approve it. A huge majority – 73% of people – support this.

Our future partnership with the EU should be not decided in secret but determined by democratic debate.

There is “no mandate for a destructive Brexit,” we are told. Well, that’s funny. Because not long ago, every Remainer in town – most certainly including Britain Stronger in Europe – was screeching about the automatic ruin which would befall Britain if we voted to leave the EU, regardless of how the Brexit process played out or whatever our eventual new trading and political relationship with the EU happened to be. For months we were told by sanctimonious Remainers that “destructive Brexit” was the only kind of Brexit available – yet now they acknowledge a benign version of Brexit and encourage us to adopt it.

Fast-forward four months and suddenly the story changes. Now, apparently, we need to fight tooth and nail to preserve our membership of and unimpeded access to the single market, because this is the lynchpin on which Britain’s economy rests. In other words, their entire economic scaremongering case was a giant lie.

Oh sure, they’ll come back and claim that most Brexiteers supposedly want a “hard Brexit” and that the major Leave campaigns envisioned Britain leaving the single market, which is why they felt justified in equating the European Union with the single market in their own campaign rhetoric. But this is the mealy-mouthed defence of someone who has been caught in a blatant lie. Remainers were desperate to bury the awkward fact that the EU and single market are not one and the same thing, and the fact that they did all they could to fudge the distinction (heck, they suggested that leaving the EU meant severing ourselves from the continent of Europe) shows that they were more obsessed with economic scaremongering than truth. It is Remainers, not Brexiteers, who dwell in a land of post-factual politics.

As this blog recently commented:

Funny. It’s almost as though [Remainers] are suggesting that leaving the EU needn’t necessarily mean “plung[ing] the UK into a period of recession and international decline”, and that Britain’s economic and diplomatic health is actually contingent on the kind of choices that Britain makes once we are free of the supranational political union.

Claiming that a mismanaged, uncontrolled or “hard” Brexit might cause serious economic harm is a perfectly respectable position. More than that, it is basic common sense. But that isn’t the argument that Remainers were making during the EU referendum campaign. No, they were claiming that any form of Brexit would be disastrous, that Britain leaving the European Union would be economically calamitous in and of itself, regardless of how Brexit unfolded or the model of our future trading relationship with the EU.

As it happens, this blog agrees with Open Britain’s revised position. Certainly as an interim measure Britain should remain in the EEA while working toward a longer-term solution which hopefully replaces the single market with a new framework which is more democratic and not part of a protectionist, beady-eyed, euro-federalist master plan. Given that the most skilled trade negotiators in the world (in which Britain is singularly lacking, despite generous help from our Commonwealth friends) take a decade or more to thrash out comprehensive bilateral agreements it is the height of idiocy to assume that a Brexit-inspired sense of urgency and the concerns of “German car makers” will get the job done in the initial two short years set out in Article 50 of the Lisbon Treaty.

But why couldn’t the Remainers just be honest from the beginning, level with the British people and tell them that it is Britain’s uninterrupted EEA access, not our membership of the supranational political union, on which our economic stability depends?

The answer, of course, is that for top Remainers the EU referendum was never about economics. It was about their craven desire to live in an amorphous internationalist blob where the nation state is fatally undermined and the strongest level of government and identity reforms at the European level. That’s what they wanted but couldn’t say in public. And so instead they falsely equated the EU with the single market in an attempt to scare low information voters and assorted unthinking lefties that voting for Brexit inherently meant economic doom.

Now that the decision to leave the EU has been made, these disingenuous people are having to regroup and come up with a new argument – that it is our future relationship with the single market, not the EU, which will have the greatest potential impact on our economy and future prosperity. And just as even a stopped clock tells the correct time twice a day, this time they happen to be correct.

Unfortunately, changing arguments mid-stream also reveals that nearly everything that the Remain campaign said prior to the EU referendum was a deliberate, filthy lie.