Bitter, swivel-eyed (and unrepentant) europhile he may be, but the FT’s Martin Wolf makes some valid points in his latest column, warning against any complacency that Britain’s persistent economic weak points will be automatically restored to health upon leaving the European Union.

British economic policymakers confront big challenges. They have to manage departure from the EU with the minimum damage. They also need to make the UK economy far more dynamic. The latter cannot be achieved if they do not abandon the myth that Britain is already an economic success, albeit one choked by the dead hand of an over-regulated European economy.

Simon Tilford of the Centre for European Reform provides a far more realistic picture in his Brexit Britain. Measured at purchasing power parity, the rise in the UK’s gross domestic product per head between 2000 and 2015 was smaller than in Germany, Spain and France. Over this period, the UK outperformed only Italy, among the EU’s largest pre-2000 members. In 2015, the UK’s GDP per head was lower relative to the average of the 15 pre-2000 EU members than in 2000: its GDP per head was a mere ninth within this group.

The UK also has the highest income inequality among these countries. Furthermore, notes Mr Tilford, UK real wages fell by 10 per cent between 2008 and 2014, before a tiny uptick in 2015, while German and French real wages rose. In 2015, only London and the South-East had higher GDP per head than the average of the EU-15 countries. Other UK regions were at or below that average. In all, it is hardly surprising so many UK voters feel left behind, as shown in the EU referendum.

True, the increase in French real wages has coincided with high unemployment. But that is not true in Germany. UK workers also work longer hours than those in other EU-15 countries. This is presumably to make up for low real wages, themselves largely due to the UK’s poor productivity. According to the Conference Board’s invaluable “total economy database”, the only EU-15 countries to have lower output per hour than the UK are Greece, Italy and Portugal, while the UK’s productivity per hour has stagnated since 2007. Again, of the biggest five EU-15 members only Italy performed worse on this measure. The UK also now runs the largest current account deficit, relative to GDP, in the EU-15.

The UK, then, has low unemployment. But it also has high inequality, mediocre real incomes, at least by the standards of its European peers, and poor external competitiveness. Above all, recent productivity growth has been truly awful.

These are hard, inescapable criticisms – particularly in terms of productivity growth and purchasing power parity, which is ultimately the only yardstick that matters in terms of whether people actually feel better off.

The implications of a realistic view of the UK economy is that, even without the looming shock of Brexit, the economy suffers from big weaknesses relative to the European economies that many Brexiters despise. Some argue that a real depreciation of sterling is mainly what is needed. If sustained, the post-referendum devaluation should indeed help, though it means a fall in real incomes and wealth. Yet devaluation alone will not cure UK weaknesses.

The UK has to rectify longstanding supply-side failings. The list includes: low investment, particularly in infrastructure; inadequate basic education of much of the population and the innumeracy of much of its elite; a grossly distorted housing market; over-centralisation of government; and a corporate sector whose leaders are motivated more by the share price than by the long-term health of the business. Not surprisingly, given all this, the UK economy is highly dependent on inward foreign direct investment, which Brexit would seem virtually certain to weaken.

If the UK is to thrive economically, it will not be enough for it to manage Brexit, hard though that will surely be. Its policymakers must also start from a realistic assessment of the UK’s mediocre performance. This is no world-beating economy. It is not even a Europe-beating economy, except on creating what are too often low-wage jobs. It will have to do far better if it is to deliver the higher living standards its people want in the tougher environment ahead.

The danger with Brexit was always that the sheer complexity of managing our secession from the European Union would prove too much for a mostly unremarkable generation of politicians and civil servants, nearly all of whom have never known life outside the EU and can scarcely imagine self-government. Even now, three months after the historic Brexit vote, there is little evidence that the government has started to get to grips with the challenge ahead of them.

Therefore, it is not unreasonable to ask – as Martin Wolf does – how much mental capacity will be left to tackle other burning issues like Britain’s low productivity, the low-skill / low-wage segment of the economy or decades-old weaknesses in British management, identified by Thatcher’s Conservatives in the late 1970s but still barely tackled even now.

And I’m not sure there is a quick fix to this problem. Brexit will inevitably dominate the political agenda, probably for the next decade, to the near exclusion of all else. And even if there was excess capacity, there is precious little evidence to suggest that Theresa May’s new government has a blazingly clear vision for reforming Britain anyway – as Isabel Hardman outlines in this excellent Spectator piece.

In short: many of these problems, though long-festering, are probably going to have to wait to be tackled, unless the government surprises us all with its radical zeal and far-reaching reform plans at the upcoming Conservative Party Conference, which seems unlikely at best.

If you wake up to discover your house is ablaze and smoke pouring into the bedroom, you don’t waste precious minutes ensuring that you are beautifully dressed and immaculately turned-out before evacuating the building. Likewise, in whatever shape Brexit ends up happening, Britain will likely emerge from the EU in much the same shape as before, with the same nagging issues and weaknesses clamouring to be addressed.

Inspiring? No. Ammunition for assorted bitter Remainers, EU-lovers and anti-patriots? Sadly, yes. But that is our lot. Brexit is likely to be a grinding, painstaking, lengthy process at the end of which the same Britain will be blinking back at us, largely unchanged, with all the rest of our work to realise the benefits of Brexit still ahead of us.

But does that mean the enterprise is not worth the effort? Hell no. And it is very telling to see those who are prepared to steel themselves for the work ahead, and those who seek to use it as a whinnying justification for giving up. 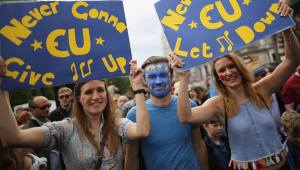 One thought on “The Economic Challenges Beyond Brexit”