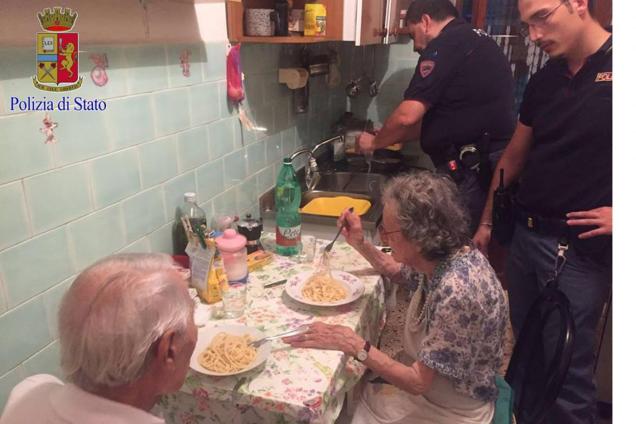 Our police forces should be knitting communities together and keeping them safe, not prancing around in military gear and threatening citizens who dare to express themselves on social media

A heartbreaking (or heartwarming, depending on your perspective) story from Rome forces us to ask stark questions of our own society, the way we treat our elderly compatriots and the proper community role of the police.

From the Evening Standard:

Kindly police officers came to the aid of an elderly Italian couple after neighbours called emergency services when they were heard crying in their apartment – because they were so lonely.

Officers rushed to the flat in the Appio area of Rome after nearby residents heard shouting and crying coming from inside, and found and 84-year-old Jole, and her 94-year-old husband Michele.

The couple said they had not been victims of crime, but were overcome by emotion after watching sad stories on the news.

The pair, who have been married for 70 years, said they had not had visitors for a long time and were very lonely.

While they waiting for an ambulance to arrive to check the couple over, the officers prepared a hot meal.

They then sat down to have a chat while the elderly couple ate the spaghetti with butter and parmesan they had prepared.

The police force said on its Facebook page: “Especially when the city empties and the neighbors are away on holiday, sometimes loneliness dissolves into tears.

“It can happen, as this time, that someone screams so loud from despair that eventually, someone calls the State Police.

“There is not a crime. Jole and Michele are not victims of scams and no thief entered the house – there is no one to save.

“This time, for the boys, there is a more daunting task – two lonely souls who need reassuring.”

Meanwhile, what do our police spend their time doing?

Well, no day is complete without threatening members of the public. Greater Glasgow Police in particular love to ostentatiously warn people that they are lurking on Twitter and Facebook 24/7, ready to pounce the moment anybody posts something deemed the least bit capable of causing offence.

And London’s own wonderful Metropolitan Police also love nothing more than turning up on the doorstep of people who dare to tweet the “wrong” opinions and sentiments, hauling them away to the police station and delivering them to the hands of the criminal justice system.

But never let it be said that the Met Police never leave their comfortable office desks. A new batch of them have recently acquired dystopian-looking, military grade combat uniforms and strutted their stuff before Britain’s news cameras in some kind of perverse authoritarian fashion parade. Ostensibly this new armed response unit is intended to keep us safer from mentally ill people, though doubtless we will soon see the same militarised response to other, less violent incidents too. As is so often when it comes to the militarisation of the police, where America leads, Britain duly follows.

Meanwhile, communities go unpatrolled and some become no-go areas. Local police, either swamped with paperwork or too busy hounding innocent citizens for daring to exercise their right to free speech online, refuse to show up to cases of reported vandalism or burglary (though they mysteriously appear within minutes if a speech or thoughtcrime is reported by some beady-eyed public collaborator).

Local Police and Crime Commissioners do not seem to have had much of an effect, though at this early stage it is difficult to be sure whether this is due to a lack of powers, regulatory capture by the police forces they are supposed to control or garden variety incompetence. And so here we are.

Is this the police force that we really want?

Is this the policing strategy that actually knits communities together, making them happier and safer?

Absolutely not. It would be very interesting to see a force-by-force breakdown of the number of police officers, civilian staff and other resources devoted to monitoring and curtailing the free speech rights and other civil liberties of Britons. And then immediately shutting down those statist, authoritarian programmes and diverting all of the freed resources to more worthy causes, like helping to tackle old age loneliness.

We’re not talking about police officers cooking roast dinners instead of catching criminals, but surely it should not be beyond the wit of man for police to act as an intermediary, perhaps connecting isolated elderly couples they come across in their work to suitable neighbours who could check in with them once in a while, or provide much needed regular social visits. The police already work with AgeUK to tackle scam criminals and improve home security. There is no reason why this collaboration could not be greatly extended.

At present, we have a police force of two extremes – small numbers of highly militarised officers, armed to the teeth with every counter-assault weapon one can possibly imagine, and a much larger force who seem unable to respond to garden variety crime in an acceptable way, and who are all too rarely visible on the streets.

If local, county and national government is serious about improving police-community relations, they could do far worse than by immediately ordering a halt to the nasty, frivolous and often arbitrary persecution of individuals on free speech and “hate crime” grounds and diverting those funds and resources to a much more worthy cause – helping to tackle the growing problem of old age loneliness in our society.

Postscript: You can donate to Age UK here.