Labour’s metro-left ruling elites want unlimited immigration to continue unchecked forever. Labour’s working class voter base want – at the very least – an element of genuine control. And there is simply no papering over this widening chasm

The biggest political issue facing the Left right now, besides the slow-motion clown car crash that is the self-immolation of the Labour Party, is immigration – specifically, the yawning gulf between the liberal metro-left who love unlimited immigration and the working class voters who stupidly, stubbornly refuse to accept what a wonderful thing it is, simply because someone else gets all of the benefits while they pick up all of the social and opportunity costs.

The latest plucky hero to try to bridge this unbridgeable divide is the Trades Union Congress, who have cooked up a fancy new report – Managing Migration Better for Britain – in an attempt to get those ignorant, racist working class plebs to go back to the Light Side.

The report is a load of codswallop, primarily because it has nothing to do with “managing migration” at all. What we have instead is a tacit (but unwritten) acceptance that unlimited immigration should continue as before, balanced with the promise that lots of failed left-wing policies from the 1970s (think collective bargaining, incomes policy and the Winter of Discontent 365 days a year) will somehow make everyone happy.

Here’s Owen Tudor, the TUC’s Head of European Union and International Relations, trying to polish that dinosaur dropping into something shiny and attractive in Left Foot Forward (his emphasis in bold, not mine):

The idea of restoring the Migration Impact Fund is now widely shared. But our concern is that the fund should be considerably larger than it was under Gordon Brown, and should give local people a say over the funding of local services, like schools, hospitals and GP surgeries. It should also pay for the extra housing needs of a growing population.

We want to make sure that the economic benefits of migration that politicians and economists talk about actually filter through to the people who need better services and more homes.

We also want to press the case for an economy that prevents both exploitation of migrants and undercutting of the existing workforce.

Bad bosses will use any opportunity to divide working people if they can make a fast buck out of it. That’s what’s behind the lower rate for young people of the so-called National Living Wage, and it’s what they tried when women entered the labour force in greater numbers.

The appropriate response is to ensure equal pay for people doing the same job in the same place, closing the loopholes that allow exploitation and undercutting, and toughening up the enforcement of such rules.

Restoring collective bargaining where unions can recruit, and introducing modern wages councils where that doesn’t happen also have a part to play.

The TUC is also advocating a bigger Border Force, with a remit to prevent trafficking and exploitation, to take the strain of enforcing migration laws off employers, landlords, education and health professionals.

As the Byron Burgers experience shows, turning private people into part of the Border Force leads to all sorts of abuses, as well as giving people roles they are uncomfortable with and unprepared for.

The very first section in the report is entitled “Take action against undercutting and exploitation”, showing exactly where the TUC’s sympathies really lie – with immigrants working low paid jobs that British people are reluctant to do for the wages on offer. Now, preventing exploitation is an entirely worthy aim, just as it was when Ed Miliband led with that ambition leading into his enormously successful 2015 general election campaign… But it has nothing to do with managing migration and everything to do with looking after people who have already migrated.

Back in the real world, though, getting all misty-eyed over the rights of immigrant workers is not the most pressing concern for most of Labour’s lost working class voters. And this is where the much-vaunted Migration Impact Fund comes in. This is to be expanded and turned into a massive slush fund where the monetary “benefits of migration to the economy” are wrested from the hands of their legal owners and dumped in the hands of local councils to be frittered away on gender-affirming street lighting, safe spaces for school exam trauma survivors and, inevitably, Our Blessed NHS (genuflect).

Unfortunately, this can basically be summed up as “raising taxes”. That is the only way that you can possibly take an economic benefit from one economic agent and redistribute it into the lap of another. The TUC can wail all they want about reinstating the 50p rate of income tax or only taxing the rich, but it will inevitably be the middle classes who end up paying into this Migration Impact Fund, through direct, indirect and stealth taxes. It always is.

Then it all starts to get very 1970s indeed. The TUC literally wants to re-establish wage councils (putting the word “modern” in front of the toxic term doesn’t make it any better) with wide-sweeping powers to encourage and enforce collective bargaining agreements on a regional and sectoral basis. And as well as advocating an immediate return to the inflationary policies of the 1970s, the report goes on to recommend the wholesale de-liberalisation of the labour market, effectively killing off the temporary workers industry and making self-employment onerously, punishingly unrewarding, stripping people of their right to flexible work and employment on their own terms.

Then the TUC turn their attentions to “shared values and a shared language”. This is where you might think they would be on stronger ground, and that perhaps we are about to hear a stirring call toward patriotism and the need for immigrants to quickly assimilate into the culture of their adopted home.

But no. Apparently the real problem is that the British are not welcoming enough, that we do not already bend and twist and cast aside our own values and traditions to make those with other values feel more at home. Hence the TUC sees a massive role for nasty, politically biased organisations like Hope Not Hate in policing the indigenous population in case of anti-immigrant thoughtcrime, with a few words about learning English thrown in as a half-hearted gesture.

Worse, the report goes on to suggest that the key to placating unease about the extent of recent immigration is to hold more “inclusive events at moments of national unity such as royal occasions, Remembrance and sporting events”. Those moments aren’t already great as they are and have been for generations, you see. They must be carefully deconstructed and reassembled by bien-pensant leftists to include more nods to other cultures.

And the last part of the TUC’s report is entitled “Protect the rights of EU citizens in Britain and tackling racism and xenophobia”, which can basically be interpreted as instructing the police to spend even more time on social media tracking down people who say off-colour things on social media and dragging them through the criminal justice system to make an “example” out of them. Again, fantastic outreach to the disaffected working class left-wing vote, just brilliant.

One can feel some sympathy with the TUC. As an organisation, their leadership is filled to the brim with exactly the kind of sneering metro-lefties that have infected the Labour Party. They all want more low-skilled immigration, either in order to signal their own virtue as Wonderful Tolerant People or as a demographic wheeze to create more future Labour voters. But they also want working class Britons to vote for them, and they know that a supremely relaxed stance on unlimited immigration is an obstacle to this goal.

But it is a goal they are not willing to give up. They will not even meet their disaffected working class voters at a genuine half way point and talk, just talk, about reducing net numbers, the one thing which many people have clearly said that they want. The most they will do is airly say “oh, let’s just raise taxes and fling the extra cash at places with higher immigration” (i.e. back to London) as though bribing people with their own tax pounds was ever a genuine, long-lasting political solution.

Getting a contemporary Labour politician to accept that a working class voter’s complaint about the level of net migration is actually about the level of net migration (and not about housing policy or workers’ rights or anything else) is about as hard as it is for an Islamist gunman to convince the political and media establishment that the terrorist atrocity he has just committed was performed in the name of Islam and is not an inchoate cry about welfare spending or social inclusion. They just don’t want to hear it. They have certain fixed narratives in their minds – unlimited immigration is always good and must be defended at all costs, Islam is purely a religion of peace and is never in any way connected with acts of violence carried out in its name – and they will squander every last drop of dignity and public credibility before letting go of those mantras.

And so, determined to maintain net immigration at current figures of c. 300,000 people a year, the Left is reduced to tricks, sleights of hand and outright lies, like this “report”, which feigns to take working class concerns about unlimited immigration seriously, yet somehow manages to propose a permanent extension of the status quo with the added bonus of resurrecting the days of industrial strife and national decline.

This is why the Labour Party is ultimately doomed, regardless of who prevails in the Jeremy Corbyn / Owen Smith showdown. This is why every Labour MP representing a Northern constituency will be deservedly plagued with sleepless nights from now until May 2020 when the electorate render their judgement. There is simply no credibility any more. Having already been shown up as grasping and self-serving in their attitude to Brexit, immigration and everything else, they have decided to simply double down on the same patronising strategy while hoping in vain for a different outcome.

Let Jeremy Corbyn (or Owen Smith) pick up this report, and try to run with it. Let’s see just how far it gets them on the stump in Stoke-on-Trent, or Sunderland.

There are two honourable courses of action open to the TUC, the Labour Party and the Left in general. They can flat-out tell their working class voters that they are wrong to be worried about immigration, that their concerns are grasping, xenophobic and not worth addressing, and then try to “educate” them in the enlightened ways of metro-leftism. That is one honourable path – politics as a means of persuasion, even against the odds.

The other honourable course of action would be for the metro-leftists to have one brief moment of introspection for once in their lives, think again about whether pursuing policies which screw their core vote is a morally acceptable choice to make in the pursuit of blind multiculturalism, and maybe start acting as the voice for the working class again rather than a very deceitful interpreter.

There is no honour, though, in the third way desperately trodden by Ed Miliband and now picked up by the TUC and Jeremy Corbyn, which is to cry “I hear you!” in response to working class sentiment about permanently high, unlimited immigration while deliberately refusing to do a damn thing about it.

This is the path which Labour has chosen, and if it leads those pandering moral cowards off a cliff and towards electoral Armageddon then nobody should shed a tear. 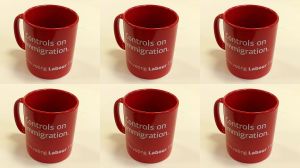