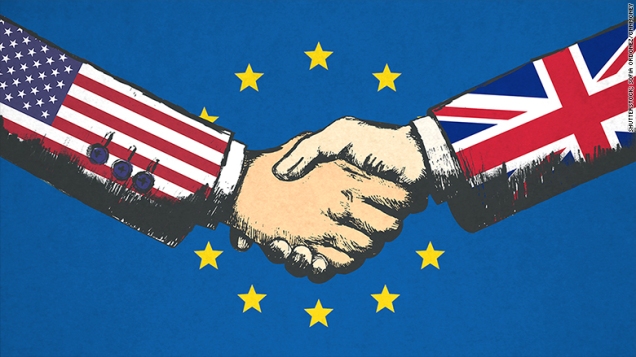 If the future is a post-democratic world then Brexiteers should be proud to have the support of the magazine founded by William F Buckley in order to stand athwart history yelling “Stop!”

“A conservative is someone who stands athwart history, yelling Stop, at a time when no one is inclined to do so, or to have much patience with those who so urge it” – William F Buckley

The National Review comes out forcefully for Brexit, in an excellent piece which takes David Cameron to task for the tawdry and nauseatingly left-wing campaign he has run.

One of the less noticed aspects of the referendum campaign has been the extent to which Cameron has had to rely more and more on fundamentally left-wing arguments to make the case for the EU — and, indeed, to rely more and more on Labour and trade-union organizations, too. He removed from the government’s program some items of legislation that were especially offensive to labor unions in return for the unions’ spending more on campaigns to arouse their apathetic members (many of whom are in fact Euro-skeptic). That oddity has gradually revealed two hitherto unseen truths about the campaign: First, the EU is essentially a left-wing corporatist cause that is hard to support on conservative grounds; second, the traditional Tory arguments of patriotism and free enterprise not only can’t be appealed to, but would arouse emotions on the right that would weaken Remain’s entire case, including its only positive argument for staying in.

That argument is that Britain would face ruin outside the EU and prosperity inside, as all “experts” know. Those experts turn out to be (some) corporate businessmen, the leaders of international organizations such as the International Monetary Fund, and heads of governments such as President Obama. Delegations of all three have been turning up in London and issuing grave warnings about Brexit at regular intervals. Small businesses and native entrepreneurs such as inventor James Dyson apparently don’t count as experts, but they have been speaking out in favor of Brexit, as have a significant number of leaders of both British and multinational corporations. What is emerging as a fault line is that this battle is between Davos Man and the rest of us.

The National Review goes on to criticise the sheer defeatism and pessimism of the Remain campaign, whose pitch to the electorate has basically been that Britain is too small, weak and puny to prosper outside of the EU’s political union:

It would be easy to continue rebuking the alarmist scare stories from Remain — and distinguished economists, including two former British finance ministers, have been doing so with zest. What is more important is to realize that they are designed not to persuade but to instil a sense of defeatism in the British people. Their consistent message is that the Brits are rubbish, can’t hack it, need the protection of Europe, and that anyone who differs from this masochistic view is in the grip of an imperialist nostalgia.

That is nonsense. The Brits are an unusually influential middle-ranking power in military, diplomatic, and intelligence terms. Culturally speaking, they are a global superpower. And — to repeat — Britain is the fifth-largest economy in the world, a leading member of all the main international bodies and likely to remain so, and a country which is a byword for effective democratic constitutional governance. It is — or ought to be — shocking that a British government should seek to instil a false sense of failure and dependency in its citizens in order to win a campaign they can’t win on the intellectual merits of the case.

And of the three explanations later offered by the National Review for this appalling behaviour from the British establishment, the third is the most persuasive:

Third, and above all, a half-conscious rejection of democracy. For the EU is a mechanism that enables the political and other elites in Britain to escape from the constraints of democracy. It removes power from institutions subject to the voters in elections, such as the House of Commons, and vests it increasingly in courts and bureaucracies in Brussels that are effectively free of democratic control and even of democratic oversight. As a result, the EU is seductively appealing to those who want to exercise power and who believe they would do so more responsibly and successfully if they did not have to account for their decisions to… well, ordinary people like their relatives.

All three passions are temptations to the power-hungry, and they have shaped a Remain campaign reflecting the interests and values of post-national, post-democratic elites. Once we step outside the moral universe of these elites, however, there is no case whatever for Britain to surrender its self-governing democracy to Brussels.

With the due deference of outsiders, we urge the British people, our friends in peace, our allies in war, to be true to themselves and to their democratic traditions on Thursday. That should be more than enough.

A good argument, well made. When publications as diverse as the National Review and Spiked are making the same case, warning against the attempt by European elites to construct an unaccountable, post-democratic society, alarm bells should seriously start to ring.

And in the fight against the dystopian, post-democratic future heralded by the European Union, it is good to have the endorsement and support of the American publication whose founding mission is to “stand athwart history, yelling Stop!”