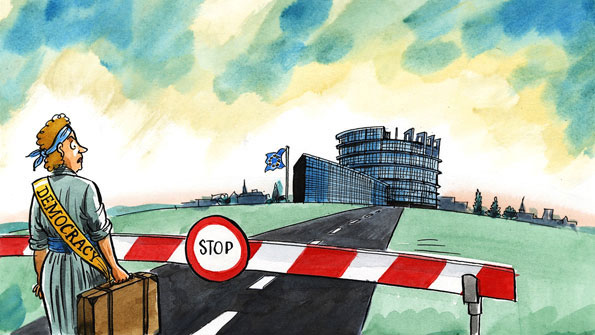 Elections alone do not make democracy

You’ll probably have heard it a thousand times by now, from a succession of glazed eyed EU apologists – “people have a nerve calling the EU anti-democratic! The European Parliament has proportional representation, which is better than the House of Commons! And what about the unelected Lords?”

The insidious idea that because parts of the British constitutional framework are undemocratic we should freely accept the deliberately antidemocratic governance of the European Union is glib and toxic, and deserves to be rebutted.

Fortunately, the bloggers of The Leave Alliance have been hard at work doing just that.

Lost Leonardo of the Independent Britain blog breaks it down to basics:

Democracy, from the Greek—demos and kratia—literally means ‘people power’. A democratic system is one in which decisions are taken as closely to the people as possible. The UK system of parliamentary or representative democracy could be said to be a limited democracy while the Swiss system of direct democracy is what one might call a true democracy.

The EU government, for that is what it is, is not only undemocratic but anti-democratic. The people have no control over the decision-making process whatsoever.

First of all, there is no self-identifying European demos. I am happy to identify as European, but I do not regard German or French people as my fellow countrymen. Although we are all born of the same civilisation, our different languages, cultures, customs and traditions makes us foreign to one another. The kind of solidarity needed to constitute a demos cannot be forced or faked and it is simply not present at the continental level. I am British first, not European.

Lost Leonardo then goes on to detail how the strength and breadth of the EU Commission’s power alone is proof that the system was deliberately designed to lift power and decision making as far above the heads of the people as possible:

There are three features of the EU system which cement the European Commission’s dominance. First of all, the EU is the supreme law-making authority in the Member States. The precedents for this are long-established in European and English law. EU law trumps British law, and where the two conflict, the judge will find in favour of the EU. In the event that a decision is disputed, the final judgement is made by what is, while Britain remains in the EU, the highest court in the land, the European Court of Justice (ECJ).

The Commission is the executive arm of a supranational government, but the commissioners are not directly accountable to anybody. The European Parliament has the power to unseat the entire Commission, which has happened once, but there is no mechanism to hold individual commissioners to account.

This is the inverse of the British idea of freedom under law which is founded on the principle that no Parliament may bind its successor. Under the EU system of governance, every law is sacrosanct unless or until the Commission says otherwise.

Some EU apologists will try to hold up the fact that there is always a British commissioner as some kind of safeguard or firewall protecting our interests, but as Lost Leonardo points out this is entirely misleading – their allegiance is to the European Union only.

Tony Edwards of The Brexit Door blog gives us an overview of the type of calibre individuals which often make it to the European Commission:

Our present commissioner is Lord Hill, his role is in the financial stability portfolio. He has never been elected to any office in the UK. Other commissioners have often been failed or deposed politicians, none so more that the UK representatives: Mandleson, Kinnock, Patten, Jenkins, Brittan. Others were totally unelected at any stage such as Baroness Aston who was held the foreign affairs portfolio during the failed Ukraine adventure.

Which is less than ideal, because:

So in essence the executive is almost unassailable, has prerogative on all legislative matters and its members are unelected. Not only that, they cannot be removed by the will of the people unless the parliament is willing to unseat the entire commission – a very unlikely scenario.

The structures of the EU are in a sense democratic in one feature, in that they hold elections. But the power of the people is incredibly far removed from the real holders of power, the commission itself, which is not democratically elected nor removable by the people directly. It is not democracy in any form that would be acceptable in the UK institutions, and the people are largely voiceless in it.

Not only that, the bodies are constituted in such a way that those who are against the general direction of further federalisation are always in the minority. In effect, once a competence has been passed to the EU, there is no mechanism for it to be returned. The ECJ, by activism can also extend the role of the EU through interpretation of the treaties, and this transfer of competencies is also irreversible in practice. Any move to repeal legislation must realistically be made by or sanctioned by the Commission.

Reform of the EU is therefore impossible. It is designed with only one purpose, to integrate more and more power to the Commission which then acts as the head of a European Superstate. The commission makes the law and sets the direction of travel with little resistance from the EU representative structure.

But still, Remainers love to suggest that it is the United Kingdom which is democratically broken, and the European Union the white knight come to rescue us. Of course our British democracy has its flaws. The unelected nature of the House of Lords. The fact that Britain ranks alongside Iran as the only other country to have unelected clerics sitting in its upper legislative chamber – a literal theocracy.

But these are reasons to take back power first from the European Union, and then set about reforming our broken government in Westminster. We need root and branch constitutional reform to unpick decades and centuries of patching, fixing and bribing, so that at long last we have a constitutional settlement we might be proud of (or at least less ashamed of having to explain to perplexed foreigners).

We should devolve power equally to the four home nations of the United Kingdom, giving Wales, Northern Ireland and England the kind of policymaking and fiscal autonomy currently enjoyed by Scotland. Tax should be devolved even further, with a low base rate of UK income tax to fund the functions of the federal Westminster government – things like defence and foreign affairs – topped up by the home nations, regions and local authorities as they see fit, according to local needs and priorities.

But even if you disagree wholeheartedly with this suggested approach, these are decisions that Britain should make as an independent, sovereign state, not as a vassal of the European Union, which exists solely to act as a ratchet towards political union and for whom good governance is very much an afterthought.

But as Pete North darkly warns, we should be under no illusion as to what will happen if we fail to take this opportunity to wrest back power from the European Union as the first step toward revitalising our democracy:

Having failed to break the political deadlock the referendum will be used as an excuse to ignore the dissent and resentment bubbling under the surface. They will be free to do as they please as though a remain vote was a mandate. The cycle of introverted navel gazing will continue among our political class while the vitality of the media continues to drain away and journalism slides into the abyss.

And having surrendered the substance of government we shall see a further abdication from grown up decision making. We will have lost any kind of effective early warning system by way of having totally dysfunctional politics and we will be forever be on the backfoot, responding ineptly to crisis after crisis without the means to defend ourselves and lacking the political intelligence to formulate policy.

In that regard, one might have some sympathy with the remainer view that Britain does not have the capacity for self-governance. We have already squandered much of it. And if that be so, and the verdict from this referendum is that we should simply surrender and fade into obscurity, travesty though that will be, then this really is the end of Britain as an independent nation.

There is a fork in the road. One road leads to a reboot; a collective reorganisation of everything to reshape our country to meet the challenges of the future. The other road leads to subordination, irrelevance and the quiet death of democracy.

In this, should we choose to remain, I don’t expect to see a big implosion. Just a very gradual crisis of competence. Things will break down without anybody quite knowing why – or even noticing that they are broken. Taxes will go up, prices will go up, the number and quality of services will decline. We will find ourselves paying for that which we assume we have already paid.

Corporates and government will do as they please to us as they will have figured out that all of the power is theirs and we won’t resist. We won’t rock the boat. We won’t risk anything radical. We will do anything to preserve the status quo and not let anything difficult intrude on our lives. Obedience is always the path of least resistance.

In that, you will be free in your gilded cage. Free so long as you live within the margins and pay your bills on time. If you make a stand individually you will be picked off. The whole weight of the system will come crashing down on you. You will have no democratic recourse. No day in court. No defence. No justice.

The European Union exists first and foremost as a ratchet process toward the full economic and political union of its constituent member states. You don’t have to take my word for it, or anyone else’s – the EU’s founders and past and present leaders openly admit as much. Only in Britain do we bury our heads in the sand as to this crucial fact.

This is the EU’s first and only priority. And if achieving it means dooming the south to permanent recession, exacerbating a worsening migrant crisis or committing any other kind of governmental vandalism, so be it. The EU certainly has no particular desire for individuals and communities to gain more control over their lives and the decisions which affect them – indeed, the entire structure of the EU reflects an enormous fear and disdain for the sentiments and priorities of ordinary people among the sainted “founding fathers”.

So whatever flaws may exist in our imperfect British democracy, do not believe for a moment that we shall transcend them by fearfully voting to remain in the European Union. We shall not.

And if you think things are bad now, wait until our Westminster parliament is truly just a council chamber in Europe.